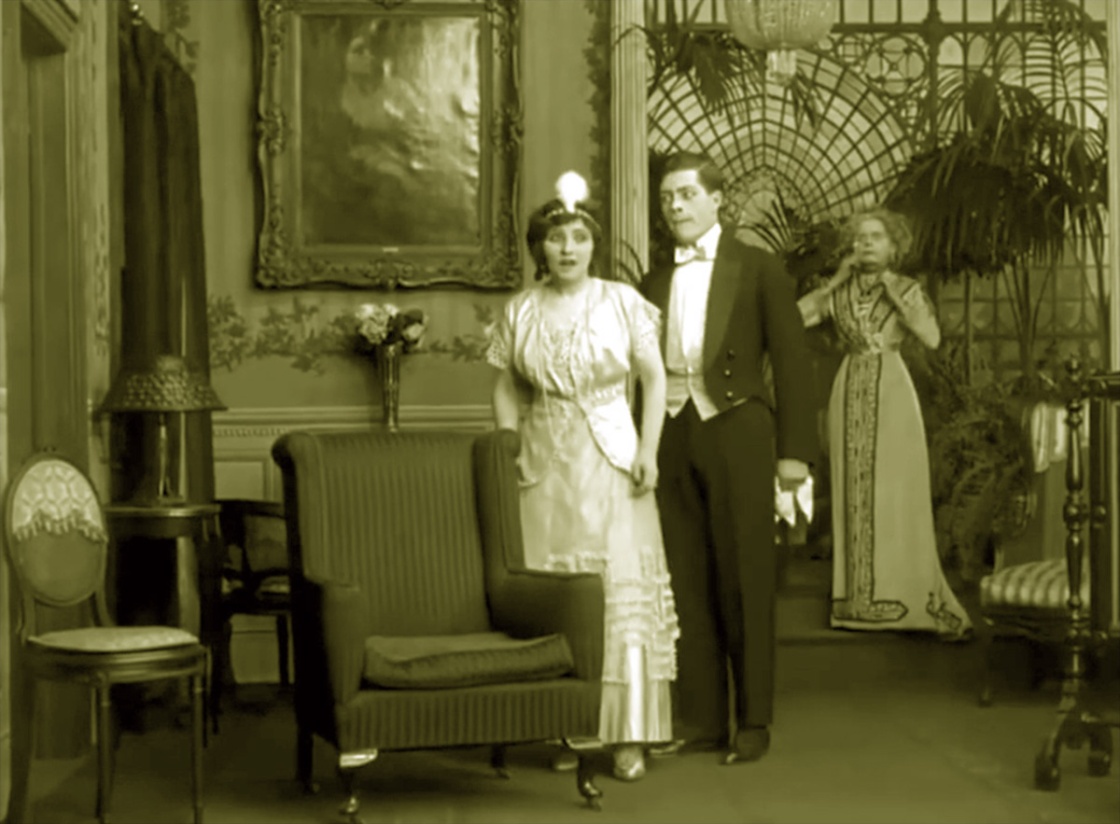 One of the Edison “talkies” released during the one-year reign of the Kintephone sound movie system. This is a short comedy about a practical joker who quickly finds that his joke has been turned back on him.

I CAN’T HEAR YOU

The early-to-mid-1910s was a period of change unrivaled in the history of film, and that includes the talkie revolution of the 1920s. Motion pictures embraced the feature-length format, the American industry moved to Hollywood and the First World War handed the U.S. industry global domination. We’re still seeing the effects of these three events today.

Lost in the shuffle was a little fad for talkies. The French Gaumont company had beaten Thomas Edison to the punch and was releasing charming musical shorts with France’s signature stencil color. Edison’s film company had been experimenting with sound since the very beginning and, while their sound system was not released before Gaumont’s, they were confident that it would soon dominate. The January 1913 unveiling of the Kinetophone was big news in the industry. The technology bellyflopped, losing its luster within weeks and a 1914 fire destroying the masters was the final nail in the coffin.

But what were these Kinetophone films like? I’ve already reviewed the Mother Goose-themed musical Nursery Favorites but it’s time to tackle a “Talker.” That is, a film that relied on dialogue rather than song.

Jack’s Joke is a short drawing room comedy with a very young Arthur Housman as the leading man. Housman is probably best remembered today for his drunk act in Hal Roach classics like The Live Ghost and Scram! During the 1920s, he was typecast as wealthy jerks in films like The Bat, Braveheart and Manhandled. This is one of his earliest film appearances and in sound, yet.

Jack (Edward Boulden) is a notorious prankster. He tells his lonely friend, Ned (Housman), that pretty Bess (Nellie Grant Mitchell) is hard of hearing and he must shout to be heard. He then tells Bess the same thing. Soon, the two young people are shouting their lungs out at one another before they realize that both can hear perfectly well. Love prevails, as do indoor voices.

The Library of Congress has done a wonderful job with their restoration of Jack’s Joke and all the surviving Edison Kinetophones in their collection. These pictures probably look and sound as good or better than they did in 1913. There are no problems with syncing, of course, so we are watching them under ideal conditions probably not experienced during their initial release. (Complaints about losing synchronization were common during the Kinetophone kickoff.)

I say this as someone who realizes my position of privilege: Jack’s Joke stinks.

I don’t blame the performers, I blame the technology. The actors were clearly told to speak clearly for the recording and the result is the kind of stiff acting that we would see during the 1920s talkie transition. To make matters worse, the recording isn’t very good. It takes intense concentration to understand the dialogue as words are not spoken so much as squawked. Further, the Edison Talkers were one-shot affairs that lacked visual interest.

At one point in the film, Bess and Ned remark that perhaps they should go to a motion picture rather than the theater because hearing was not required for the movies. This was meant as a winking reference to the new Kinetophone technology, of course, but it was a mistake to bring up a superior form of entertainment in a real bomb of a sound picture. (This is also a very early, albeit insensitive, acknowledgement of the silent film’s very real appeal to deaf and hard of hearing viewers.)

And now we come to another myth about the silent era (which wasn’t so silent, as it turns out). I hear this pretty regularly and this is a perfect place to address it: “Yeah, we may think it’s bad but people back then didn’t have anything else to watch or listen to. I’ll bet they were gobsmacked!”

Now, this argument is flawed to begin with. Silent era audiences had vaudeville, local theatrical productions, band concerts, phonographs, player pianos, as well as multimedia presentations that incorporate live dance, lectures, brief films and more. Plus, in the case of the Kinetophone, they had silent cinema that was really starting to catch fire. The earliest all-at-once (as opposed to serialized reel-by-reel) feature-length American productions had been released in 1912. Directors like Lois Weber were displaying jaw-dropping imagination with even short productions.

But we don’t have to guess at what audiences and theater owners of 1913 thought of Jack’s Joke. Variety covered the trade side of Edison’s invention, its poor reception and the issues of Jack’s Joke in particular.

The March 7 issue, just two months after the Kinetophone’s debut, states that theater owners were upset and worried about the technology, particularly if they made commitments to buy, sound unheard. There was an eager audience to see and hear the films… once. Repeat business was not happening. The article was not optimistic that the new releases in the series would save the day:

This week’s exhibition of subjects in the Edison Talker is the poorest yet. “Faust” with four people and “Jack’s Joke” with five people, both “studio” sketches, were shown. The phonographic arrangement was irritating, and the voices resembled noise more than tones. With the picture itself uninteresting the talker lost its last chance and has been pronounced all along the line as “through.

Later in that issue, Variety covered the presentation of Jack’s Joke in theaters:

Along with this were the talking pictures, with their so-called perfect synchronism entirely absent. This didn’t help the show even a little bit. The bookers might tack the talking movies to the tail end of a bill and give the audience a chance to walk out if they so wish. One of this week’s subjects, “Jack’s Joke,” gives a good impression of what might be expected when the patent is perfected. The dialog was painful and the picture failed to carry any of those really funny pantomimic situations occasionally appearing on the screen minus the canned talk. It was worse than sitting through one of those really bad picture house acts.”

Ouch! “Would have been better silent” and “play it at the end so people can walk out on it” are not what you want to hear about your flagship talkie production.

That little story of “Jack’s Joke” gave the principals in the Talker an opportunity to shout so that the horns could catch their conversation “upstage” before the camera. It looks as though the percentage was too great for the synchronizing to become a lasting success right now. The other pictures are a relief when compared to the Talkers.

Variety hits on what many of us already suspected: the plot of Jack’s Joke was designed around the deficiencies of Edison’s recording technology. The way the recording devices were situated simply did not capture the voice well—you know, the one thing they were supposed to do—and without backing music to cover the problems, the performers shouted to be heard. In fact, the shouting in Jack’s Joke is not terribly different from the rest of the dialogue, making the plot even stranger.

Now, the obvious problem with the Edison pictures vs the Gaumont goes beyond the sound itself. Kinetophone films looked like they had been shot a decade before. Editing was sent back to the stone age, lest it interfere with the sound, as shown by the harsh cut to a blank screen to convey the end of Jack’s Joke before the cast returns for an encore. The cut between the opening credits and the film proper is accompanied by a sharp tap on a woodblock. Further, the camera keeps a polite distance in order to capture all movement, giving the pictures that stiff, filmed play look.

If it had been a silent film, changing up the size of the title card text could have playfully conveyed THE SHOUTING OF THE CHARACTERS. And the facial expressions of the performers could easily have been captured in medium shots and closeups because editing would have been possible.

Gaumont, on the other hand, incorporated more medium shots and used its technology mostly for songs, which made the need for editing less urgent. And, yes, they did sound better. Ambition is all well and good but the best technological advances immediately convey their utility to potential buyers. At a time when audiences were demanding longer, bigger films, Edison put all of his eggs into the Smaller Production Values But Talking basket. Gaumont went for a little song, a little dance and it paid off. The company kept making sound shorts for years.

Jack’s Joke is not a good film but it is a fascinating one. In fact, I highly recommend viewing all of the surviving Edison and Gaumont talkies if you have any interest at all in the eventual transition to sound. It’s obvious why sound movies were not initially taken seriously. After all, the fad had come and gone just fourteen short years before.

In addition to the historical value, spotting later stars so young and fresh and in sound is great fun. Enjoy!

Released on DVD by Undercrank, along with the other surviving Kinetophone shorts restored by the Library of Congress.