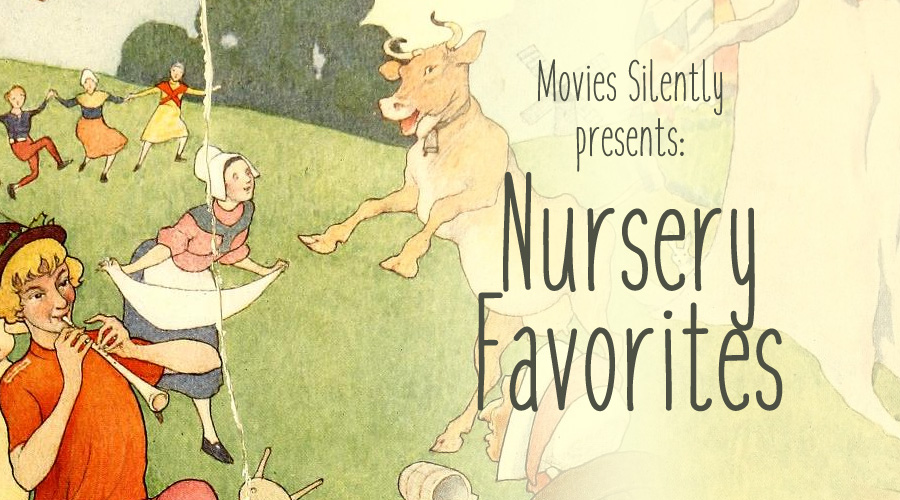 The Edison film company took a stab at talking pictures pre-WWI and we are going to be looking at one of the most famous Kinetophone production. One of over 200 sound films released in 1913 and 1914, Nursery Favorites brings everyone’s favorite Mother Goose characters to life.

What is a tuffet anyway?

With movies secure in their position as popular entertainment, brilliant technicians around the world set about solving the mystery of the next big technological breakthrough: the talkies. Thomas Edison’s company had been playing with sound movies since the very beginning as evidenced by William Dickson’s famous experimental sound film from 1894-1895. Edison himself spoke of making sound films as early as 1890.

Pictures under the Edison banner were first displayed in a peepshow format, first called the Kinetoscope and then, with the addition of sound and reusable public earbuds (ewww!), the machine became known as the Kinetophone. Projected film soon rendered the old peepshow format obsolete and synchronization issues were present even in the tiny clips housed inside the Kinetophone box and it sold poorly. Even without the projection breakthrough, Edison’s first stab at sound films was a bomb.

European inventors made impressive progress with sound technology over the ensuing years (I have covered French sound films from 1900 and 1911) and Edison unveiled his own disc-based synchronized sound system in 1910. Competition was fierce, complete with industrial espionage. Oh my! (Reportedly, Gaumont offered an Edison employee $100—over $2,000 in modern money—in exchange for advance notice on sound breakthroughs.) Finally, Edison abandoned the disc for the cylinder and in February of 1913, the new and improved Kinetophone was unveiled in New York.

While the French Gaumont company was using true sound technology, many rival sound movie companies simply had performers lip-sync to a commercial recording and then sound and film were played together. Some sources state that Edison’s Kinetophone was true, live sound with the performers being recorded on both film and sound device simultaneously while others claim that it was merely another lip-sync outfit. Certainly, Edison’s technology was advertised as true synchronization and this claim was backed up by a demo reel that involved a man giving a speech as plates were smashed and horns tooted around him.

A simpler production, Nursery Favorites involves assorted singing and dancing Mother Goose characters including a giant, a fairy and Miss Muffet. There’s not much of a plot (where would it fit?) and everyone just comes in, sings a few lines and that’s it. Muffet is threatened by a giant spider on a string, which is really the highlight of the thing, and then the curtain comes down.

The sound was recorded on a cylinder and it’s okay, especially considering that it is over a century old. What struck me was that how little the musical arrangement and singing style changed between this picture’s 1913 release and the musical cartoons that were so popular in the 1930s and 1940s. Close your eyes and you just might be able to visualize Mighty Mouse in the background.

Fans of Viola Dana will want to keep their eyes peeled for her two sisters. Officially, Edna Flugrath (the only one of the sisters to keep her real name) plays Little Miss Muffet and Shirley Mason (then billed as Leonie Flugrath) plays the Queen of Fairies. However, I think it’s possible that the credits have been reversed. Flugrath would have been twenty at the time Nursery Favorites was filmed and Mason was only twelve. Compare the Queen of Fairies and Miss Muffet and tell me which one you think is the tween.

(Update: Per the documentary So Amazingly Perfect They Are Really Weird, Edna’s presence is not confirmed but Shirley plays Jack the Giant Killer, which makes sense as she was a rather petite child and Jack is the shortest character.)

In any case, when interviewed for the acclaimed Hollywood documentary series, Dana recalled that her sister’s scene was ruined by a slowed-down sound cylinder and she announced herself as the Queen of Fairies in a baritone. Issues with synchronization quickly became evident and once the novelty of the technology wore off, audiences openly guffawed at the accidental hilarity of sound that was delayed, too fast or too slow.

Edison’s attempt at the talkies fell to a triple whammy: synchronization woes, the First World War cutting off the European market, and a fire that burned all the Kinetophone masters in December of 1914. With no way forward and the bloom off the talkie rose, Edison abandoned the Kinetophone for good. (By the way, I am highly indebted to Silent Film Sound by Rick Altman for background details and I recommend it to anyone interested in early sound film technology.)

Visually, Nursery Favorites is rather more in the mode of 1905 than 1913. If you want to see what I mean, check out Lois Weber’s tour de force production, Suspense, from the same year as Nursery Favorites. Weber employs extreme close-ups, triptychs, imaginative framing and other flourishes to turn a simple melodrama into an exercise in cinematic style. Director Allen Ramsey, on the other hand, is content to simply gather his cast before the camera and let it crank. Clearly, the sound is meant to be the star of the show. (One is reminded of some of the staid talkies in the early sound era.)

The whole thing has a very school play feel with the performers crowding onto a relatively small stage and practically sitting on one another’s laps. For more modern entertainment for your children, watch these YouTube videos which are great for getting kids singing along with the music! A more effective presentation would have been to cut to each act individually and then gathering everyone on the stage at the end for the musical grand finale. Of course, some of this limited scope can be blamed on the fact that Kinetophone films could only last six minutes—the length of a cylinder—but I do think a bit more sophistication would have been possible. The Gaumont sound productions of the period certainly showed more polish and style.

In the end, the Kinetophone and the other pre-WWI sound technologies were abandoned and the quest for talkies would be delayed until after the armistice. (And, of course, the wartime leaps in microphone technology helped immeasurably when the world went crazy for sound once again.)

While Nursery Favorites is impressive on some levels, it lacks the sparkle of French sound productions of the period. Still, the performers are game and the concept is solid. Definitely worth seeing.

Released on DVD as part of the Discovering Cinema set from Flicker Alley. I highly recommend this valuable collection to anyone interested in the history of movie color and sound.

The film is also part of the Undercrank Productions release The Kinetophone: A Fact! A Reality!, which gathers the surviving Kinetophone shorts.