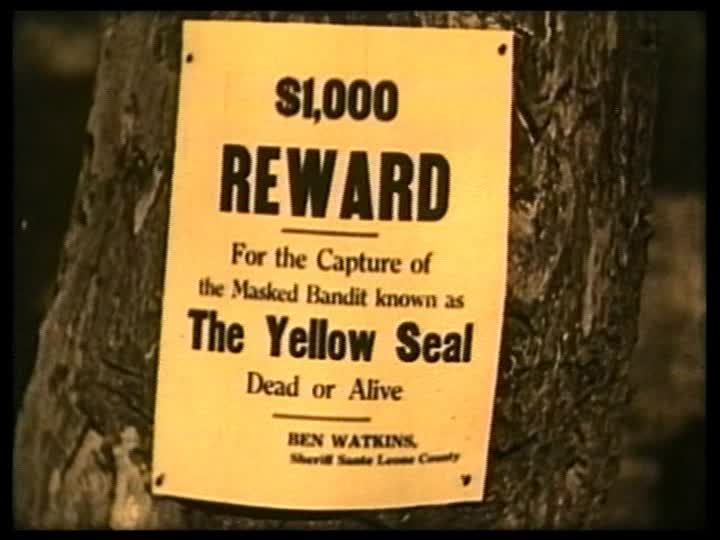 Harry Carey plays a cowpoke who turns to a life of crime after his sister kills herself. His only clue to the identity of the man who drove her to it is a twisted cigar butt so Harry naturally starts holding up saloons and stealing their ashtrays. Wait, what?

All your cigarette are belong to us!

Silent films can be (and often are) smart, witty and clever pieces of entertainment that stand the test of time. The Prairie Pirate is not one of them. It’s as dumb as a box of rocks but has stumbled onto that magical quality of unintentional hilarity. I don’t know about you but I love so-bad-they’re-good films! Let’s dive into this delicious turkey (with cheese!) and have a grand time tearing it to little pieces.

Brian Delaney (Harry Carey) is a cattle rancher who lived with his sister, Ruth (Jean Dumas). One day, Brian is off rounding up stray cattle when Aguilar the bandit (Fred Kohler) shows up at the ranch. He has his men introduce him and declares that he wants to romance Ruth but she is having none of it. This is where Aguilar gets nasty and Ruth ends up barricading herself in the cellar and shooting herself.

Brian returns home and notices a strange cigar butt in the front yard. This is an odd detail because the front door (which is RIGHT IN FRONT OF HIM) has been bashed in. Maybe Brian just spends all his time staring at the ground instead of what is five feet ahead of him. Anyway, he finds his sister’s body, another cigar butt and a note. She writes that bandits are breaking in and they won’t take her alive.

This is where the film reveals its idiotic script. You see, Aguilar introduced himself and spent the previous scene referring to himself in the third person. Ruth knew who he was but she didn’t feel the need to include that information in her note? All she had to do was write “Aguilar” and it would have been all the clue most people would need to seek revenge. Darn it, Ruth! You had one job!

So Brian, with a strange cigar butt with a twist on the end as his only clue, seeks to find the man who drove his sister to suicide. Fade to commercial.

Some time passes and title cards inform us that a new bandit is flashing in El Capistrano. (Stop giggling, you!) It’s Brian, dressed all in black and sporting a mask. Because he dresses in black, he is known as the Yellow Seal (hey, I didn’t write it) and there is a hefty price on his head. And then there are a bunch of title cards about the Yellow Seal “leaving his mark” that I find hysterical because I am four. 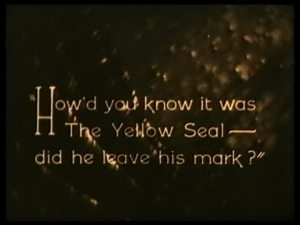 Why did Brian become a bandit? To find clues that will lead to his sister’s killer, of course! How would a bandit find clues? By infiltrating criminal gangs and building connections that will allow him to hear news from the outlaw underground? No, silly!

He means to solve the mystery by robbing saloons and stealing all their ashtrays.

That is his plan. His only plan.

So many questions… It strikes me that stealing the contents of ashtrays is more of a service than a crime. Why don’t the saloons just leave all their cigarette butts in a can for the Yellow Seal to pick up? Why are the authorities even looking for him? Why doesn’t Brian get a job as a busboy and sift through the ashtrays legally and at his leisure? What about the cigar brand? Why not interview tobacconists on their clients’ cigar habits?

If they had to include the bandit angle, why not have Brian turning to a life of crime so he can pay informants and spies to find the perpetrator? Anything is better than this:

I’m starting to think that avenging his sister is just an excuse and that he has a thing for ashtrays. This family doesn’t seem to have two brain cells to rub together.

Whilst Brian is conducting his reign of terror, the proud Esteban family is in peril. Don Esteban (Robert Edeson) has been gambling away his fortune, much to the horror of his daughter Teresa (Trilby Clark). Howard Steele (Lloyd Whitlock) holds Esteban’s gambling notes and plans to use this leverage to force Teresa to marry him. This is quite literally a “You must pay the rent!” “I can’t pay the rent!” scenario. To make things even more clichéd, it seems that Steele is in cahoots with Aguilar.

All the clues are laid out neatly for Brian and so he naturally ignores them and keeps right on stealing ashtrays. He targets Steele’s place but has no success (in spite of the aforementioned cahoots) and so he locks Steele in the safe and threatens to suffocate him. This seems a bit out of proportion to the villainy he has shown to date. Is this something Brian just does? Does he get some kind of sick pleasure? Does he? (I think he does.)

Steele gets out, of course, and vows to track down the Yellow Seal. He also now holds the deed to the Esteban ranch and Teresa has no choice but to marry him. Well, I think the Yellow Seal is about to do some more flashing in El Capistrano. (I told you, stop giggling!)

Hoo boy. This movie. It is so irredeemably stupid that I suspect it may actually be a masterpiece. The story does not improve as things move along and we end up with an incredibly silly climax. We also learn that Brian may be an outlaw but he also manages to retain the services of a housekeeper. Just because he’s a lawbreaker doesn’t mean he is untidy and the carpets won’t clean themselves.

The story gets even nuttier when Brian decides to carry off Teresa but leaves a trail so obvious that Steele and Aguilar are able to find his hideout lickety-split. How has the Yellow Seal evaded capture for so long? I think the wanted posters were just put up because the sheriff felt sorry for him and wanted to make him feel like a real bandit.

The performers are… there. Harry Carey could be fantastic when provided with the right material. This is not the right material. I’m not sure anyone could have saved this ridiculous script and the supporting cast is no help. Trilby Clark is pure vanilla, everyone else overacts outrageously. Carey’s character is given to sobbing fits and, well, it’s all rather silly.

While some set pieces have the potential to be really exciting, nothing pays off. Film historian William K. Everson suggests that the picture may have been going over budget and needed to be cut off. In any case, any film with a plot that can be truthfully described as “the hero steals cigarette butts” is in the kind of trouble that no budget can fix.

I have called this movie stupid, silly, idiotic but do you know what I have not called it? Boring! This picture is a gem of accidental comedy and is definitely worth seeing on those terms.

The Prairie Pirate is available on DVD from Grapevine. I would avoid the Alpha edition as dialogue cards are cut from the climax, rendering it very confusing indeed. (It’s generally good policy to avoid Alpha altogether.)