The Cigarette Girl of Mosselprom (1924) A Silent Film Review

The title character (played by Cannes-honored director and onetime Queen of Mars Yulia Solntseva) is the object of affection for three very different men: a silly bookkeeper, a handsome cameraman and an American businessman in Russia.

Even if we know that Russian films were not strictly propaganda, many do incorporate political elements into non-political stories. For example, The Girl with the Hat Box and The House on Trubnaya dealt with housing shortages and unionizing domestic workers. The Cigarette Girl of Mosselprom is different in that politics are left at the door and the story could have just as easily been set in New York or Paris or Berlin of the 1920s. Still, the film does manage to include some distinctly Russian flourishes.


Before starting, it’s worth mentioning that The Cigarette Girl of Mosselprom uses the same lead performers and possibly even the same costume designer as Aelita, the iconic Soviet science-fiction hybrid. Aelita’s cinematographer, Yuri Zhelyabuzhsky, takes the helm as director and the action remains decidedly earthbound.

(By the way, when you run into a Romanized name with the letter combination ZH, it stands for the Cyrillic letter Ж and is pronounced like the “s” in treasure or pleasure. All those Zs can look intimidating but it’s really quite easy when you break it down. If you can say “Frappuccino” then you can say “Zhelyabuzhsky”.)


Everything in the film revolves around Zina (Yuliya Solntseva), a cigarette street vendor. Mosselprom was the Moscow Rural Cooperative Administration, which dealt in assorted consumer products including cigarettes. (Check out some vintage ads here.) By the way, the Mosselprom building still stands, though I don’t think it was quite finished when this film was made. (The construction was quite torturous, I believe.)

Zina quickly attracts the attention of three men. The first is Nikodim Mityushin played by popular Russian comedian Igor Ilyinsky, who specialized in playing silly little men given to panic and tantrums. Nikodim has been buying cigarettes from Zina daily—despite the fact that he does not smoke! He also does not notice that his co-worker Maria (Anna Dmokhovskaya) is madly in love with him.


The second man is Oliver MacBride (M. Tsybulsky), an American businessman who hopes to open a high end ready-to-wear fashion house in Moscow. He hopes to hire Zina as a clothing model and perhaps something more.

Finally, we have Latugin (Nikolai Tsereteli), a cameraman working on a major film. He immediately realizes that Zina is played by Yuliya Solntseva and pressures the reluctant director to hire her in a major role. Based on their shared love of cloth caps, Zina and Latugin fall head over heels in love and this is where the troubles begin. 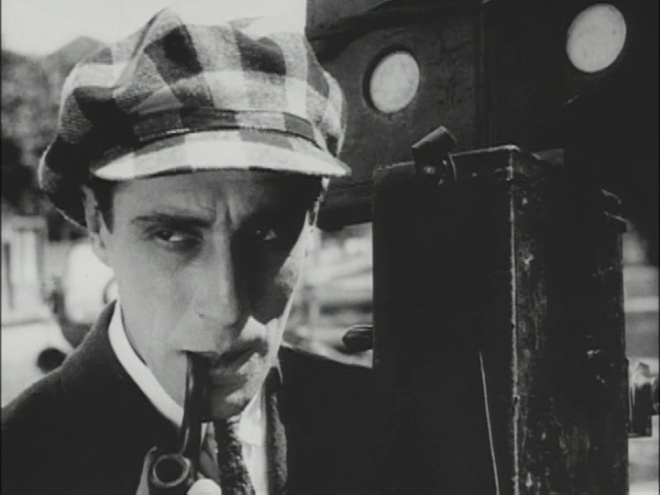 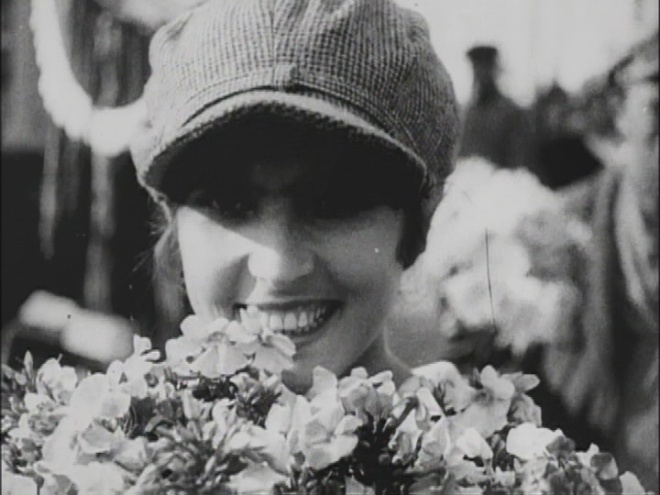 Latugin is too distracted to actually shoot a picture. Nikodim, meanwhile, has decided to style himself a screenwriter in order to get Zina to notice him and that would be fine if he didn’t insist on acting out his eccentric scenarios in the bookkeeping office that employs him.

If there is one lesson to be found in The Cigarette Girl of Mosselprom, it is that people in love are a pain in the rear and, also, never hire Nikodim as a translator if you hope to pitch woo to the woman he loves.


I liked Nikodim a lot more than he probably deserved but, hey, I do love a nice helping of Ilyinsky, especially when he is this zany and fussy. The Guy Who Won’t Take No for an Answer is a pretty squicky trope under normal circumstances but that’s not really what’s going on here as Zina does continue to encourage him. And at least he is called out for his behavior here and even temporarily tries to mend his ways. And, again, the actor playing the character is so cute that it’s difficult to stay angry at him for his antics.

Latugin and Zina are caught in the old romance two-step in which the partners take turns being angry and feeling betrayed and instigating the breakup. Of course, the cameraman is the most dashing of the trio of suitors. I see what you did there, veteran-cameraman-turned-director Mr. Zhelyabuzhsky.


MacBride, meanwhile, is really just a typical American mogul as portrayed in European films of the period. Compare him to Mr. Quaker in The Oyster Princess: corpulent, out of touch, smokes like a train, can’t make a move without an army of retainers. The image was most definitely fixed in the public mind thanks to real-life sybarites like Diamond Jim Brady.

Zina is pragmatic and refreshingly unconcerned with marriage (a common trait of Russian women in rom-coms of this era) and is just a interested in securing a more comfortable profession as she is in courtship with Latugin. And, of course, Yuliya Solntseva is both attractive and charismatic enough to make the feelings of her three suitors understandable even if their behavior is eccentric. (Oddly enough, MacBride, the character who runs closest to outright caricature, conducts himself most normally.)


Solntseva left acting a few years later to support the work of her husband, director Alexander Dovzhenko. She was honored in her own right at the 1961 Cannes Film Festival when she won Best Director, the first woman to do so and, until 2017 when she was joined by Sofia Coppola, the only woman to do so.

Zina’s costumes are one of the major draws of the picture. While audiences of the day likely delighted in her flowing frocks when she was an actress and her high fashion drama when she was a model, modern viewers (at least the ones I have discussed this with) are absolutely delighted by her simple, modern garb as a cigarette seller. Her Mosselprom cap with the short visor and her simple short-sleeved blouse could be the very next trend in ladies fashion. Somebody call Oliver MacBride.


Finally, I very much enjoyed the behind-the-scenes look at a busy Russian film studio during the 1920s. The film also explores the politics of films with Latugin’s director going behind his back to get him fired and scheming to remove Zina as well.

Zhelyabuzhsky’s direction is pretty spot-on for 1924. It’s not as cutting-edge as what the Russian directors in Paris were accomplishing at the time but it gives the viewer a good taste of the flavor of 1924 Moscow and the film’s somewhat leisurely pace lets us take it all in.

While this is a fine film and sure to entertain, it does miss that little mischievous wink that makes Boris Barnet comedies such delights. It is self-aware about the odd behavior of its characters but a few more pokes at their self-absorption would have done much.

The Cigarette Girl of Mosselprom has a more, er, European pace than Barnet’s comedies but it does have plenty of pleasures, especially Ilyinsky and Solntseva. The screenplay also displays enough self-awareness to prevent the antics of its cast from wearing out their welcome. Further, the shots of Moscow are stunning and you will covet one or more hats from this production.

Released on DVD by Kino.