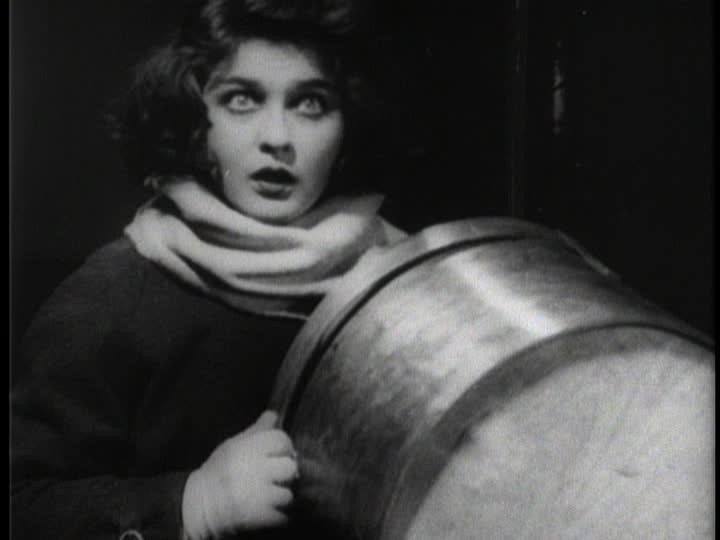 Housing shortages, wage theft, tax evasion… are these really subjects for comedy? They are to director Boris Barnet! Anna Sten plays a mischievous milliner who enters into a marriage of convenience with a homeless college student so that he can use her Moscow apartment. Of course, nothing works out the way they planned and matters are further complicated when Miss Sten becomes the proud owner of a winning lottery ticket.

I just married a guy I found sleeping on a park bench!

Note: It is never strictly business.

But before we get into the romance and the comedy, we must discuss real estate in the USSR. I know that this doesn’t sound very exciting but it’s absolutely necessary to understand the story. It’s just one paragraph. You’ll thank me later.

From the very start, the Soviet Union suffered from a housing shortage in major cities as the rural population began to stream to the urban life. Rooms in communal apartments were far more desirable than dormitories but they were difficult to obtain. Housing was owned by the government and was assigned to individuals and families by the square meter. It is this assigned housing that forms the uniquely Russian backbone of our story.

The Girl with the Hat Box (sometimes translated as When Moscow Laughs or Moscow That Weeps and Laughs) moves quickly so hang on!

Natasha (Anna Sten) is a teenage milliner who lives with her grandfather in a little village outside of Moscow. She and her grandfather make stylish cloches at home and then Natasha takes them to Moscow to sell. She has a silly suitor, Fogelev (Vladimir Fogel, who suffered from the titular ailment in Chess Fever). Fogelev is the local railway station clerk and he is constantly neglecting his duties to pitch woo to Natasha. She’s not impressed.

On one of her train journeys, Natasha is annoyed by a pair of oversized felt boots. Inside those boots are feet and the owner of those feet is Ilya Snegiryov, a country boy who is heading to Moscow to continue his studies. Ilya is played by Ivan Koval-Samborsky, who was a capitalist psychopath in Miss Mend, a chess-addicted beat cop in Chess Fever and got intermittently kissed and shot by Ada Vojtsik in The Forty-First. You have to admit the man had range.

Ilya is smitten by the lively Natasha but manages to step on her hatbox, which does not endear him to her. They part ways at the station but you just know that more is going to come of this.

Natasha sells her hats to Madame Irene (Serafima Birman), who owns a millinery shop with one-room apartments above it. One of those rooms is registered to Natasha but she never uses it because she prefers to stay with her grandfather. This causes some bother for Irene and her doofy husband (Pavel Pol) as the housing inspectors are suspicious but it does mean that they get an extra room at their disposal.

Natasha delivers her hats and returns to the train station. As she is sitting in the waiting area, she is startled by Ilya reaching out from under her seat and grabbing her foot. Natasha is ready to wallop him with her hatbox when the train arrives and she leaps on it. As the train pulls away, Ilya shouts after her that he was just looking for a ruble that rolled under her foot. He’s at the train station because he has nowhere else to go.

Ilya’s last words stick with Natasha and she resolves to rescue him when she returns to Moscow the following day. Ilya has spent a freezing night on a park bench and so he is ready to listen to her proposal. And her proposal is a literal proposal. If they get married on paper, he can have the room that she never uses anyway. Simple!

And it is as soon said as done. One trip to the registrar’s office later, Natasha and Ilya are husband and wife and he has full rights to her government-assigned room above Madame Irene’s shop.

Why do I get the feeling that nothing will turn out as they planned?

First of all, The Girl with the Hat Box was designed to be a bit of light entertainment. Filmmakers are allowed to have fun, they don’t have to be making heavy art every minute of every day. Boris Barnet was capable of darker, deeper content but he also had a comedic light touch that is very refreshing. Just enjoy the movie for what it is.

What I really liked about this film was how Barnet turned romantic comedy tropes and clichés (already well in place by 1927) and tweaked them enough to give them new life.

For example, have you ever seen this old chestnut? The hero and heroine of the film (usually a comedy but sometimes a drama) are posing as a married couple because reasons. But at night they discover that (gasp!) the accommodations don’t allow for separate bedrooms and everyone expects them to (whisper) share a bed! (Why so many people are fixated on their sleeping arrangements is never properly explained. I think it’s creepy, personally.) Anyway, hilarity ensues as the not-married couple tries to keep their modesty and virtue intact while still appearing to enjoy wedded bliss.

I’ve seen this cliché show up everywhere in films for at least a century. When Natasha misses her train home, she finds herself stranded in Moscow and has to share her room with her husband. And this is where the cliché gets turned on its head. Ilya and Natasha accept the arrangement as necessary and retreat to opposite corners of the room. But then a desire overwhelms Natasha. She sees handsome Ilya sleeping nearby and she can’t control herself. She has to… play a practical joke?

Yes, that’s what happens. Natasha scratches on her hatbox and pretends that a giant mouse is attacking her. Ilya jumps up and tries to rescue her but then realizes he has been had. He goes back to sleep. Of course, this all backfires on Natasha when a real mouse shows up and Ilya refuses to come to her aid. Fool me once…

The Girl with the Hat Box is just packed with moments like these. While we may know the overall outcome of the romantic comedy, there are just enough curveballs thrown our way to keep us off-balance and make the movie fresh. Combine that with some very snappy editing, imaginative composition and we have one of the smartest romantic comedies of the silent era. Actually, of any era. (I can see this as a fabulous double bill with Moonstruck. Who’s with me?)

The cast is excellent. Serafima Birman and Pavel Pol are a so-awful-you-love-them pair of schemers. Ivan Koval-Samborsky is amiable and cute as the bumpkin lover. Vladimir Fogel brings his trademark morose neuroses to his role. (I have seen people complaining that Natasha is cruel to reject his love. Um, he follows her everywhere and won’t leave her alone even though she is clearly not interested. That means that she owes him… nothing at all! This idea that a man “deserves” a woman just because he is persistent is outdated and dangerous.)

However, Anna Sten really is the best thing about the picture. She’s kind-hearted, industrious and clever but she also has a delightful streak of mischief. Sten’s expressive face is fun to watch and it’s no wonder that Hollywood wanted her.

For those of you who don’t know the story, here it is in brief. Sten went over to Germany and made some pictures, which got Samuel Goldwyn’s attention. Entranced with her performance, he determined to make her a star and spent years and vast sums of money on this ambition. However, Sten’s films and Sten herself never clicked with American audiences and she was given the unflattering moniker of “Goldwyn’s folly.”

It is sometimes said that Goldwyn brought Sten over to be another Garbo but that doesn’t really tell the whole story. Vilma Banky had been a shining star for Goldwyn in the twenties but had retired from films after a few attempts at the talkies. Her voice was not bad nor was her accent any thicker than that of Greta Garbo. Rather, her un-American/British voice did not mesh with her image as a dainty princess or girl-next-door. Goldwyn hoped that Anna Sten would become a Vilma Banky for sound.

Dubbing her the “Passionate Peasant,” (oh good lord) Sten’s foreign origins were played up. She was tutored in English and vehicles carefully crafted around her. All the work was for nothing as the returns on Goldwyn’s investment did not match the money he had poured into making Anna Sten a star. A vibrant and exciting screen personality was reduced to an asterisk in Goldwyn’s career. Even her obituaries contained a hint of snark about “Goldwyn’s folly.”

Whether or not her Goldwyn films were any good is actually beside the point. No human being could possibly live up to the year of breathless hype that Goldwyn bestowed on Sten. With fawning publicity assuring everyone that Anna would be great and they would see her… soon, the public grew tired of Sten before they had a chance to fall in love with her.

It’s a shame that Sten’s career was effectively killed by the very person who most wanted to see her succeed but at least we have films like The Girl with the Hat Box to remind us of how wonderful she could be.

This movie has everything you could want in a silent romantic comedy. The acting is marvelous, the casting is perfect, the situations are hilarious and Barnet’s insight into human nature adds just enough depth to keep things grounded. It’s great fun and I definitely recommend it.

The Girl with the Hat Box was released on DVD as a double feature with Barnet’s sound drama Outskirts. The disc is now out-of-print but is available used.