I’m cooking my way through the 1929 Photoplay Cookbook and you’re invited to tag along. Today, we’re going to be trying a recipe that is meant to indulge cravings without added poundage.

At the start of this, I said I wouldn’t buy an ice cream maker.

But first let’s talk about the star. Estelle Taylor is one of those actresses I have not seen often on the screen but every time I do, I like her. She was John Gilbert’s leading lady in Monte Cristo and stole the show from John Barrymore as Lucretia Borgia in Don Juan.

But how were Estelle’s ice cream skills? That’s what we are about to find out! I’ll admit that this recipe doesn’t look like much but it surprised me.

Oh boy, that description! “It may be eaten with an easy conscience by plump persons.” Sweet talk ’em, Photoplay!

Of course, this isn’t really ice cream as there is no cream. I know the names for frozen treats vary from country to country so just know that I am using the American English usage throughout. In these parts, we call a frozen fruit puree sorbet if it has a creamy texture, a granita if it’s more ice crystal-ish (my personal preference) and an ice if it’s fairly solid.

Whatever you call it, frozen fruit puree is a universally popular dessert because it’s delicious. Taylor’s recipe is especially clever because the syrup of the peaches already contains dissolved sugar, no need to worry about graininess.

An “ordinary” can of peaches in the 1920s would have been a 30 ounce can in heavy syrup, at least according to the seven bajillion Del Monte ads I examined. Don’t worry too much, though. This recipe really depends on the size of your blender and ice cream maker.

I used peaches in light syrup because that’s what I always buy but in hindsight that was a bad idea as sugar improves the texture of frozen desserts, especially ones that are also fat free.

There are no measurements for the apricot juice but I used about half a can or 6 ounces of Kern’s apricot nectar. (Which is pretty much my childhood in a can. I drank so much of the stuff! Ah, nostalgia!) I also added a squeeze of lemon and a pinch of salt to create a more complex flavor.

Instead of following the instructions, I tossed the peaches and their juice plus the apricot nectar into my blender and pureed until smooth. I could have strained it through a sieve but I don’t mind a touch of pulp so I plopped the batch into my ice cream maker as-is. (I have one of those affairs with a drum you pre-freeze.) After that, into a metal bread pan for further freezing. 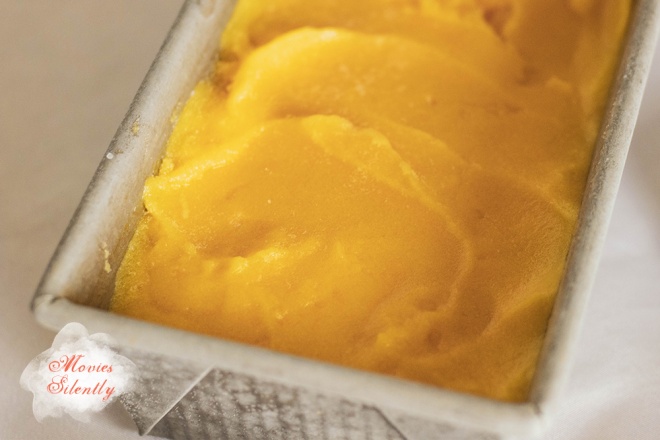 Score: 4 out of 5. This is super tasty and the apricot is the real star of the show. I wasn’t expecting it to bring so much flavor but it adds this lovely tanginess that prevents the dessert from becoming too insipid and it’s unexpected because peach desserts are common but apricot is more often encountered as a jam in my neck of the woods. 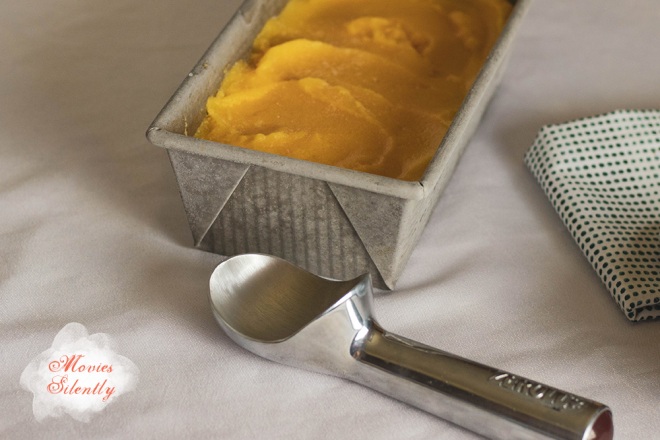 The texture was more like an ice, very hard and dense, but as I stated above, I think that’s probably my fault for not using the heavy syrup. If you don’t have an ice cream maker, you can just pour the puree into a pan and stir it every twenty minutes. Or you can use a fork and once it starts to freeze, scrape it to make a crystalish granita.

The flavor of this was absolutely divine and the pretty color is inviting. It’s also refreshing and zippy, an ideal summer treat.