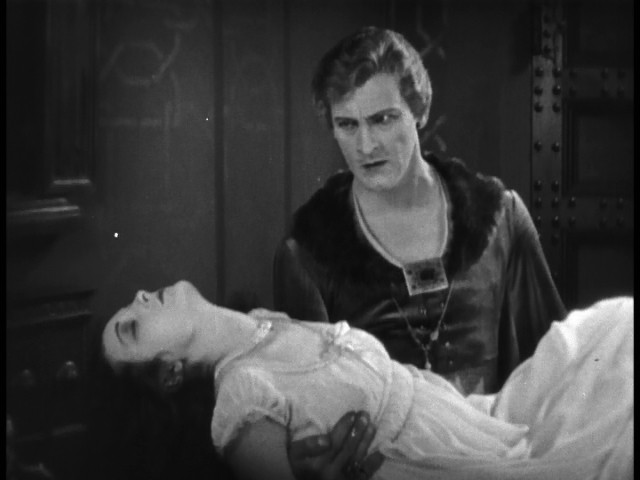 John Barrymore takes on the role of one of history’s great lovers. Raised to be a libertine, Don Juan romances his way across Europe until he ends up in Rome and runs into something completely different: a nice girl (Mary Astor). Unfortunately, she is promised in marriage to a Borgia. I think a little action is called for.

Don Juan is a historically important film. It was the first feature-length movie to be released with a Vitaphone score and sound effects. (This means that, while it is a sound film, it is not a “talkie”) It also reunited John Barrymore and Mary Astor, who had worked so well together in 1924’s Beau Brummel, and was directed by Alan Crosland, best remembered today as the director of The Jazz Singer. Finally, it was a prestige picture, which meant that the sets and costumes were of the very best.

But do prestige, budget and historical significance make for a good bit of entertainment? Let’s see.

Don Juan’s name is synonymous with passionate love affairs. Not bad for someone who never actually existed. He first appeared in print in 1630, the anti-hero of the play The Seducer of Seville (El Burlador de Sevilla). Don Juan is a charming libertine who must eventually pay the price for the dishonor and death he has caused.

Well, Hollywood knows what to do about that! Especially with handsome John Barrymore in the lead. In fact, Mr. Barrymore plays, not one, but two roles in this film.

The tale begins in Spain with Don Juan’s dad, Don Jose (John Barrymore), walling up his wife’s lover and tossing her out in the streets. Young Juan is brought up to be both a skirt-chaser and a woman-hater. The old Don himself is stabbed by one of his more jealous mistresses, leaving a young Juan to fend for himself.

Good rule to know: Don’t insult the lady with the dagger in her top.

And then some time passes and Don Juan (John Barrymore) has relocated to Rome. The city is ruled by the powerful Borgias, in this case, the kids of Pope Alexander VI. Cesare (Warner Oland) is the leader but Lucrezia (Estelle Taylor, who pretty much waltzes away with the film) is the brains. The brawn is provided by Count Giano Donati (Montagu Love), a kinsman who is a wonder with a blade.

Donati sets his cap at Adriana (Mary Astor), a nice convent-raised girl. Meanwhile, Lucrezia declares that she will be the one to tame Don Juan’s wild ways. Unfortunately (and you can see where this is going) Don Juan is also taken with Adriana.

What’s a Lothario to do? Will he win over Adriana? Will he defeat the wicked Borgias? These are the questions that Don Juan hinges on.

I have to be honest, I did not care much for this film at all. Here are a few reasons:

John Barrymore. I love the man’s acting. I think he is great. And normally, I am totally in favor of just letting him chow down on some scenery… however! he is a little too much even for me in this film. He drags out Don Jose’s death scene to the point that it turns into unintentional comedy. The seduction scenes are similarly overwrought. In general, he needs to be dialed down a few notches.

That’s not to say his performance is wholly bad. The moments of comedy (such as when he is carrying on simultaneously with a man’s wife, mistress and ward– and the man in question shows up) work well. The moments of seriousness are not quite as successful. Barrymore rolls his eyes, grins crazily and or glowers at the camera in a most peculiar manner. As I said before, this is normally a plus in my book but it is just taken too far.

It should be noted, though, that Barrymore is not the only one at fault. Pretty much everyone (except Mary Astor) overacts terribly. While Estelle Taylor is able to create some wonderful over-the-top villainess moments, the rest of the cast comes off… well, goofy. Montagu Love’s performance is all right but he is done in by some very silly hats. You cannot take a villain seriously when he is wearing a silly hat. It’s simply impossible.

Mary Astor’s performance is, as usual, smart and restrained. That’s saying a lot considering the material. Her character, Adriana, is a completely naive creature who accidentally agrees to a tryst with Don Juan because she doesn’t understand single entendre, let alone double. When he shows up for romance, she panics, he thinks she is playing, she faints and then he feels like a heel. And she then thinks he is just splendid for not forcing himself on her.

Poor Mary Astor is not given much to work with, as you can see, but she is a trouper and tries her best.

As I said before, Estelle Taylor has a great time with her role as wicked Lucrezia Borgia. She struts, threatens, leers, and generally acts every inch the despoiler of young Spaniards. She is also the only character who manages to really unsettle Don Juan, a man who is generally not easy to rattle. (Read John Barrymore’s lips during the dungeon scene and the dialogue will become much more interesting.)

And I really enjoyed her smart-mouthed handmaiden, who is always ready to rub in the fact that Don Juan is preoccupied with Adriana. In fact, why couldn’t the whole movie had just been about these two? It would have been glorious.

Now you are probably saying “isn’t that handmaiden Myrna Loy?” And you would be right! Myrna gets an awful lot of close-ups and lingering shots for such a small role. It is clear that the camera just loves her. And since Myra Loy is one of my all time favorites, here is a gallery of her costumes in Don Juan. 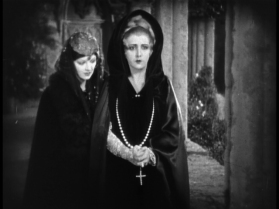 Anyway, where was I? Oh yes, costumes. The costumes in Don Juan are all over the place historically and geographically. They are really more 1920’s than anything else. Here is a small sampling of the costumes and hair worn by the ladies of Don Juan: 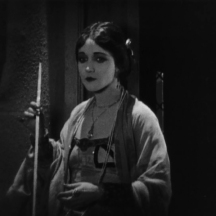 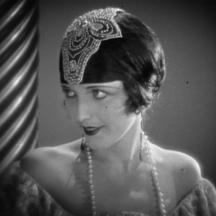 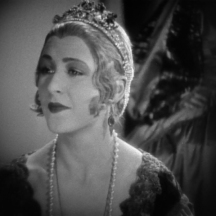 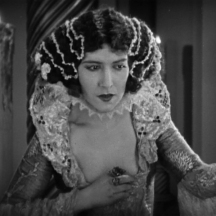 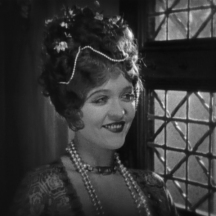 Inaccurate but fun. Speaking of ladies, Phyllis Haver plays one of Don Juan’s more good-natured lovers while Hedda Hopper plays the suicidal one. And Helene Costello (daughter of Maurice, sister of Dolores and future sister-in-law of John Barrymore) plays Adriana’s maid, one of the few women Don Juan does not romance.

Now it’s time to look at this film’s biggest problem: the scenario. Characters are introduced, made important and then utterly forgotten. (Spoilers ahead) For example, Adriana is blackmailed into marrying Donati when the Borgias threaten to kill her father. However, the father is utterly forgotten when she and Don Juan are arrested by the Borgias and the two make their escape to Spain (killing a few extras on the way). Don Juan’s comedy sidekick, Pedrillo (Willard Louis) is similarly abandoned.

The script is also done in by history. Since Lucrezia and Cesare were not killed by Don Juan in real life, they are basically left in Rome gnashing their teeth but free to strike again. Not very satisfying. Surely something could have been done so that the film was not climaxed by Barrymore mowing down a few extras the viewers have never seen before.

But how about that sequel starring Estelle Taylor and Myrna Loy?

The film also falls into the trap of portraying a man sowing his wild oats (or in Don Juan’s case, opening up an organic oat farm) as a naughty fellow who just needs to find a good woman. And that woman must be pure and clean, etc. etc. etc. A woman aggressively pursuing her man? Strumpet! And no, the love of a pure young man will not save her. Are you daft?

With the exception of Adriana, Don Juan’s lovers are portrayed as annoying, clingy, depressed, desperate, deranged, jejune, catty… I think the film-makers were trying to show why Don Juan does not trust women but stacking the deck against all of womankind does not tend to make me any more sympathetic to the hero. I mean, the men of Don Juan are pretty horrid too but he doesn’t go around proclaiming his hatred for the male sex, now does he?

The film does have some pluses. The sets and costumes are lovely, the stunts are exciting and John Barrymore does have good moments. In one widely praised sequence, he disguises himself as the Borgia’s chief poisoner (Gustav von Seyffertitz) by altering his facial expressions and donning a robe.

In the end, Don Juan is what it set out to be, no more and no less. John Barrymore is showcased (in profile often and in progressively tighter costumes) and the Vitaphone score plays away (a little too happily, I must say). The overwrought scenes of passion and the sloppy script are just too much to overcome, however, and the film finally sinks under its own weight.

Don Juan is available on DVD-R from Warner Archive with the original Vitaphone score. I find it a bit too jaunty for my taste. Walling people up does not call for a merry jig. However, the print is lovely.