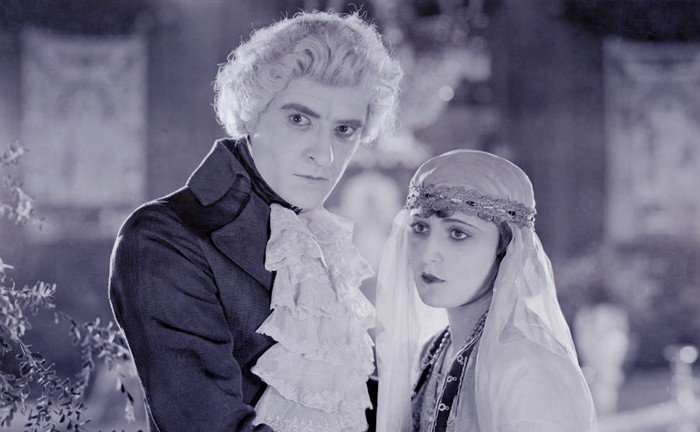 I am pretty sure we all know the famous Alexandre Duman tale. Nice guy gets framed, finds buried treasure and then he is off for revenge. Tralalala! A very young John Gilbert stars as the vengeful count, determined to destroy the men who sent him to prison on false charges. Gilbert buckles swash (or is it swashes his buckle?) in admirable style.

Revenge! Revenge! But not too much

The 1844 Alexandre Dumas novel The Count of Monte Cristo is one of the most filmed novels of all time, with dozens of adaptations in as many countries. And so many of them are disappointments. It is not entirely the fault of the filmmakers. Dumas’s whopping opus is so intricate and intertwined that it would be almost impossible to condense it to two hours.So you can imagine that I was a bit underwhelmed at seeing yet another Monte Cristo.

It stars a very young John Gilbert, in his pre-Great Lover period, as the innocent Edmond Dantes, a man too fortunate for his own good. Promoted captain, about to marry the lovely Mercedes (Estelle Taylor, though I do prefer her to be wicked), Edmond has everything that he could want. But you see, it’s what other people want too. Like Danglars (Albert Prisco), who wants the position of captain for himself. Or Fernand (Ralph Cloninger), who loves Mercedes.

An anonymous letter, a corrupt prosecutor and the deed it done. Edmond is arrested at his own wedding and sent to rot in the infamous island prison, Chateau d’If. The prosecutor, De Villefort (Robert McKim), spreads the word that Edmond died in prison. Of course, Edmond is alive and has gained an ally. Abbe Faria (Spottiswoode Aitken) is an imprisoned priest who educates Edmond. Before he dies, he tells Edmond of a treasure on the island of Monte Cristo. Edmond escapes, finds the treasure and returns to France a rich man.

At this point, things get really interesting. Over twenty years have passed since Edmond was imprisoned and all his enemies have prospered. Danglars is a rich baron, Fernand has married Mercedes and De Villefort is a powerful judge. Edmond has purchased the title of count and in this guise, he sets out to destroy his enemies. Mwahaha.

The performances in Monte Cristo range from excellent to hammy. Robert McKim (who I always just seem to like) and a then-unknown Renee Adoree (who would later be famously paired with John Gilbert inThe Big Parade) are some of the bright spots. Spottiswoode Aitken, however, creates some unintentional humor with his ridiculously overdone death scene. Ralph Cloninger’s performance as Fernand consists entirely of acting like a textbook Hot Blooded Latin, flaring his nostrils and going for his knife.

But the big question is this: How is Gilbert? In top form, actually. Gilbert usually gave his best performance when he wasn’t caught up in being the Casanova. I’m not a huge fan of the frenzied wooing that Gilbert is famous for. For my money, I would rather see him as Mary Pickford’s charmingly gawky city pal in Heart o’ the Hills any day of the week.

The relatively staid love story of Monte Cristo frees Gilbert to focus on the Count’s single-minded quest for revenge. The Count was a vampiric figure in the book but Gilbert plays him in more of the classic swashbuckler style. Handsome, athletic and ready to duel at the drop of a chapeau. What’s more, the movie camera loves him.

While many subplots had to be dropped due to time constraints, the adaptation is intelligent and keeps the most interesting story elements intact. Until the end. At this point, I will issue a spoiler warning.

The problem with most adaptations of The Count of Monte Cristo is that they get the relationship between Mercedes and the Count totally wrong. Either the pair gets back together (as they do in this version) or Mercedes tells the Count off for his unseemly vengeance. The book is considerably more realistic. Too much has happened for Mercedes and the Count to take up their romance. She departs with her son by Fernand, who has joined the army. The Count takes up with Haidee, one of his young partners in revenge.

Of course, that is not a Hollywood ending. Monte Cristo opts instead for the Count to surrender his fortune and become a fisherman (!) alongside Mercedes. The whole thing ends with the beginnings of a tasteful clutch overlooking the ocean. Anticlimactic does not begin to describe it. But I can’t really be too angry. No film version that I’ve seen has ever gotten that dern ending right.

Once thought to be lost, Monte Cristo is a welcome treat. Gilbert’s considerable screen charisma and a smart adaptation makes this a good movie in its own right, though on a rather small scale.

Monte Cristo has been released on DVD by Flicker Alley bundled with another long-lost swashbuckler, Bardelys the Magnificent.