Charley Chase’s mother has just remarried but she hasn’t told her new husband about her adult son. Charley poses as his step-father’s valet and, of course, chaos ensues, especially when the new maid (Martha Sleeper) gets in on the act.

Readers of this site know two things to be true: I am crazy about Hal Roach comedies in general and Charley Chase in particular. There are few silent era comedians (and, yes, I am counting all of the Big Four) who can extract belly laughs from me with such consistent success.

I am a bit of a tough audience for comedy, I don’t have much of a reaction. A comedy might get a smile out of me and be considered a triumph. In this case, reader, I LOL’d.

As with many of Chase’s comedy shorts, Mum’s the Word revolves around deception and disguise. (Chase’s comedies in general have a European boudoir comedy flair to them.) Our hero’s mother (Virginia Pearson, just seven years older than her onscreen son) has remarried a man named Gilroy (Anders Randolph). He has a hot temper and she is afraid to reveal her son’s existence until she can be sure her new hubby will like him.

Unfortunately, the son is heading home to mother. Charley Chase’s comedy persona eschewed fake mustaches and props; he was just a nice young fellow with a somewhat zany sense of humor that would get him into a bit of trouble. Or a lot of trouble. Usually a lot because that’s funnier.

A usual Chase hero is cheerful, eager, energetic but with a touch of impishness that becomes more pronounced as the film progresses. And, like an American Bertie Wooster, he is absolutely bursting with fantastic plans that don’t work.

In film, his call to adventure is a bullet in the backside. He’s riding on a sleeper train and Martha Sleeper (Chase’s frequent co-star) is across the aisle. Somebody tries to steal her handbag but she wakes up with a scream and fires with her tiny pistol. Poor Charley gets it in the shorts but Martha is so cute that he can’t stay angry. 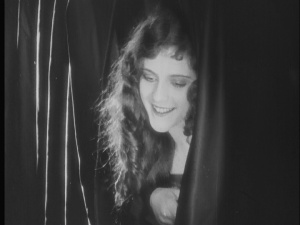 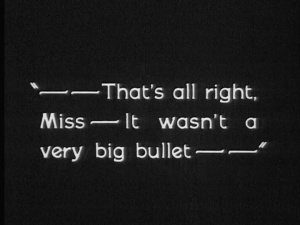 Charley arrives home and is greeted by his mother but then step-father walks in on them and they have to think fast… Charley is Gilroy’s new valet! Charley sets about making the best of his new employment and is surprised to see that the household also has a new maid: the pistol-packing Martha from the train.

You might think you know where this is going and you’re right but getting there is all the fun in this case.

While this is definitely a Charley Chase production, Martha Sleeper proves herself to be a co-star in every sense of the word. She gamely engages in antics involving swapping shoes and crawling around the carpet looking for lint and provides some of the biggest belly laughs in the picture with her flawless comedic timing.

The best sequence of the film is probably the shaving scene. Gilroy wants a shave and a shoeshine but Charley is wearing his shoes (it’s a long story). While Charley shaves Gilroy, Martha crawls along the bathroom floor taking off one pair of shoes and putting another on him. Charley whips the chair around so that Martha will remain unseen and the shaving cream flies.

Chase is a generous co-star and everyone in the short gets a chance to shine. Anders Randolph blusters and shouts in the accepted comedy heavy manner. Virginia Pearson is sometimes described as a veteran vamp but her filmography reveals that she played a lot of standard heroines for Vitagraph and Fox; manicurists, Frenchwomen during WWI, that kind of thing. When she stabs a man, it’s only to defend herself from a Fate Worse Than Death, etc. You know, silent movie stuff.

You probably know Pearson as Carlotta’s mother in The Phantom of the Opera but she was actually cast as Carlotta originally. When the film was recut for sound release, Universal cast a real soprano as Carlotta and Pearson was rather heartlessly downgraded to the mom role. She seems to be having fun in Mum’s the Word, fussing over Chase and sneaking around her own house in filmy nightgowns. (Though why she still has a pair of baby socks for him on knitting needles, I will never know. I’ve heard of taking time finishing projects but that seems a bit extreme.)

The whole comedy culminates in everybody running in and out of one another’s bedrooms and while they don’t actually hide in wardrobes, they do take cover posing as chairs, concealing themselves in chests and sliding under bedclothes. It’s the sort of thing that would frowned on later under stricter censorship but it’s all pretty harmless.

Of course, we must lavish some praise on Leo McCarey, who brings his patented blend of chaos and class to the picture. McCarey went onto bigger things in the talkies, of course, most notably wrangling the Marx Brothers and making Cary Grant Cary Grant but his silent work with Chase resulted in genuine masterpieces of short comedy. Mighty Like a Moose, Crazy Like a Fox and His Wooden Wedding never fail to charm newcomers to silent film and they are my go-to pictures for a dreary day.

Mum’s the Word has everything fans have come to expect from a Charley Chase comedy with Leo McCarey at the helm: a light touch, a bit of sauciness, a lot of charm and plenty of laughs for everyone. Highly recommended as a way to brighten your day.

Mum’s the Word has been released on DVD in the first volume of Kino’s The Charley Chase Collection. (This is the version I screencapped.) It is also available as part of Milestone’s Cut to the Chase DVD collection. Alas, there has been no definitive mega collection of Chase’s silent work, though many of the home video releases are very good.