What’s better than a silent movie? A free silent movie! Many loaded talkie DVDs and Blurays include related silent movies as extras. These films are often rare and/or unavailable from any other source and usually feature first-rate scores too. The problem? When the title isn’t on the cover, it may be hard to track down which disc has what. That’s where my list comes in. I am sharing some real hidden gems buried in the “extras” menu.

(I live in California and so this list is made up of films from my region but many of them are region free. Always check region encoding before ordering.)

The 1921 version of Camille stars Nazimova and Rudolph Valentino but you won’t see any mention of it on the cover of the Greta Garbo vehicle’s DVD. Oh well, I will gladly exchange publicity for a silent movie presented with an excellent orchestral score.

You can get details and purchase here.

Read my full-length review of the 1921 film here. (Don’t miss the comments! They are bonkers!) 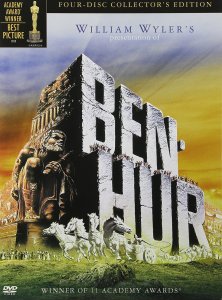 The real gem of the 2005 DVD release of the 1959 Ben-Hur is not the deadly dull Charlton Heston vehicle, it’s the wondrous 1925 original! (Yes, original.) This version has the glorious orchestral score by Carl Davis and it’s one of my favorites.

You can see more details and purchase the DVD set here.

This early John Ford western is tucked away as an extra on the Criterion Collection’s release of his 1939 classic, Stagecoach. It features a lovely score by Donald Sosin.

You can learn more and purchase Stagecoach on DVD and Bluray here.

The earliest Ernst Lubitsch film currently available on home media (if you know of an earlier one, please share!) is tucked away as an extra on the Criterion Collection release of Trouble in Paradise, his pre-code hit. It features a plucky score by Aljoscha Zimmerman.

Conrad Veidt’s last film made during his first stay in Hollywood is included as an extra on the Criterion Collection release of Lonesome, a part-talkie also directed by Paul Fejos. The print is a little rough compared to other Criterion releases but seeing this rare film is worth it!

You can see more details and order a DVD or Bluray here.

You can read my review of The Last Performance here.

Rene Clair’s very first film (a sci-fi comedy!) is included as an extra on the Criterion Collection’s release of Under the Roofs of Paris. I warn you, this is the cutdown version that Clair himself released later in his career but it is still a grand bit of fun.

You can learn more and buy the DVD here.

Read my review of The Crazy Ray here.

The Wizard of Oz Films

Okay, this includes more than one film but are you really going to complain about more silent films? Of course not! The deluxe anniversary edition of the 1939 classic includes not one, not two but five silent Oz films. Wowzers! We get The Wonderful Wizard of Oz (1910), The Magic Cloak of Oz, The Patchwork Girl of Oz, His Majesty the Scarecrow of Oz (all 1914), as well as the infamous 1925 Larry Semon version of The Wizard of Oz.

(Most of the deluxe multi-disc Oz releases have some silents as extras but these vary from version to version. Always check in advance to make sure the film you want is included.)

You can read more details and purchase a Bluray here.

What’s your favorite silent film included as an extra? Let me know!