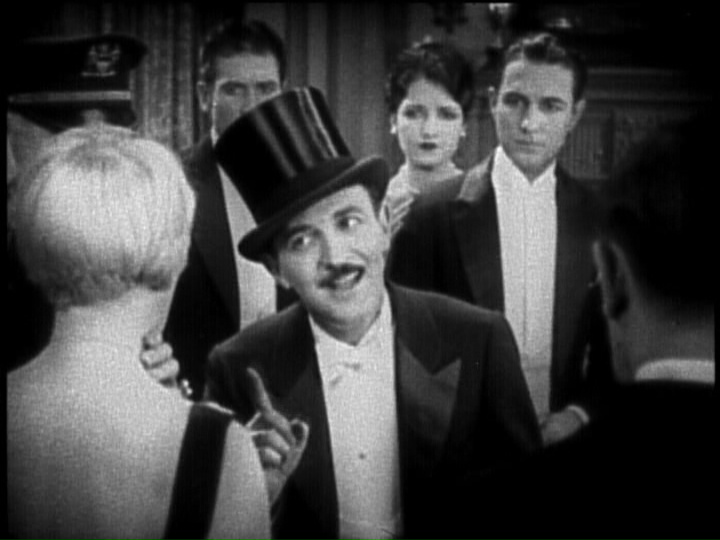 Raymond Griffith plays a coroner called to the scene of a murder most foul, which just ruins his plans to spend the evening at the theater. When the search for the killer turns out to be more complicated than he had expected, he must use every trick in the book to reveal the culprit.

On the houseboat, with the dagger

Silent comedy has been much bigger than silent drama for quite some time now but not all comedians seem to have broken through to the mainstream. While your average movie fan will recognize Chaplin, Keaton and Lloyd and the slightly nerdier variety will be able to rattle off names like Mabel Normand, Charley Chase and Mack Swain, there are many comedy greats who are inexplicably obscure. Mr. and Mrs. Sidney Drew, Reginald Denny and Raymond Griffith, for example. All have their enthusiastic devotees and defenders and yet they have comparatively little name recognition outside the silent movie fandom.

Is it because their comedies are less slapsticky than what is considered to be the silent norm? For me, that’s a feature and not a bug. Today, we’re going to be discussing Raymond Griffith, the Silk Hat Comedian, who delighted audiences with his quirky plots, light comedic touch and slight dose of the surreal. The film is You’d Be Surprised, a little comedic mystery.

I should note that while the AFI Catalog lists the characters’ names, the version I saw does not use them in the title cards. However, since it’s easier than typing “Hey, you!” a bunch of times, I will use the AFI names where applicable. Also, the names have a rather Clue-like flavor as they are all colors: Black, White, Green, Grey… Is Hasbro paying royalties to Griffith’s heirs?

You’d Be Surprised doesn’t mess around. It opens on a party being held on a posh houseboat. Mr. White (veteran character actor Edward Martindel) announces that someone has stolen a valuable necklace from him. He knows who the thief is and is willing to give them a chance to return the stolen property. He will turn out the lights and when they come on again, he expects the necklace to be back in its case.

The lights go out and, would you believe it, not only is the necklace NOT in its case but Mr. White is dead, stabbed. Mr. Black (Earle Williams, 1917’s fifth handsomest leading man) enters from the next room and immediately demands an explanation but everyone has gone all shifty. The police arrive and announce that this is a job for the coroner.

Mr. Green (Raymond Griffith) is planning to go to the theater and finds Mr. White’s death to be frightfully inconsiderate. He hopes for an open and shut case and a line of beads from the body to a grandfather clock seem to indicate that the killer has left a trail. Dorothy (Dorothy Sebastian, fresh from George White’s Scandals and maker of boffo gingerbread) is found inside the clock with the necklace and her dress embellishments match the beads found beside the body.

Open and shut, Green is free to attend the theater! Ah but he is taken with Dorothy and can’t fathom how she could possibly be guilty. Despite all the evidence against her, he decides that he is going to form a coroner’s jury and find the real killer.

He is assisted by Grey, White’s deaf valet (played by deaf actor Granville Redmond), and a six-person jury consisting of everyone the police could grab at this hour of the night: a stoker, a milkman, a hooker, a hot dog seller, an apple peddler and a waiter. We also get a cameo from Richard Arlen at the end as a reporter. (Does this mean You’d Be Surprised exists in the same cinematic world as Feel My Pulse? I’d like to think so!)

Unfortunately, every new piece of evidence seems to point back at Dorothy and all the other clues disappear when the lights go out. (Someone invest in lanterns for this investigation!) Will Green get to the theater on time? Will he clear Dorothy and take her as his plus one? See You’d Be Surprised to find out!

Raymond Griffith is a delight as the coroner and lead investigator of the murder. The story quickly establishes him as selfish but it’s a selfishness most of us can relate to, even if we don’t want to admit it. Having plans for the evening but getting called into work is no fun at all, no matter how worthy or important the job.

Griffith wades into the madness of the plot with the other mad characters but he still manages to be just realistic enough to avoid descending into cartoonish behavior. Mugging is kept to a minimum (I have a very low tolerance for mugging in all but the broadest of comedy) and while he is slightly mad himself, Griffith also recognizes that his world is bonkers and reacts accordingly.

His persona is affable, always smiling and always scheming. It’s a crazy life and one must come prepared for every contingency, including a thieving murderer on the loose. Griffith believed his character’s silk hat was a major key to comedy success; a mishap that would be just funny in a more casually dressed person becomes uproarious in formal attire. While the story of You’d Be Surprised is not the best of Griffith’s surviving films, Griffith’s persona is perfectly droll. (I should also note that Griffith did not enjoy the creative control of independent comedians like Chaplin or Hal Roach players like Stan Laurel. He had some power as the star of the show but many creative decisions were simply out of his hands.)

Dorothy Sebastian isn’t given a huge amount to do other than look suspicious and be “the girl” of the comedy. Granville Redmond has a little bit more fun, though his part is full of deaf stereotypes, and Earle Williams is fine as the blustery Mr. Black. Other than that, the supporting cast kind of blends together, especially the rich swells who are the prime suspects.

Alas, director Arthur Rosson does little to create a suspenseful atmosphere or use the houseboat setting in an imaginative way. There is a bit of business with a black cat but this picture really called for something a little more Germanic, similar to the atmosphere Roland West created in The Bat and The Monster and what Paul Leni did with The Cat and the Canary. Heck, even Harold Lloyd’s short Haunted Spooks had a chillier ambiance and that film didn’t arrive at the old dark house until after the halfway point.

And there’s no point in setting a manor-style mystery on a houseboat if you treat the houseboat exactly like a manor. The killer could have taken a dive overboard, attempted to drown other guests, cut holes in the boat’s bottom, etc. Instead, we get no nautical peril at all; most of the action takes place in the boat’s ballroom and only steps outside once or twice. Frankly, I was shocked to learn that this was an original screenplay by Jules Furthman (The Big Sleep, To Have and Have Not, Nightmare Alley) and not an adaptation of a set-bound stage production.

The title card end of things fares far better than the screenplay. Credited to veteran title writer Ralph Spence and humorist Robert Benchley (father of Nathaniel, grandfather of Peter), they are a droll lot that perfectly capture the understated style that was Griffith’s signature. A sample: 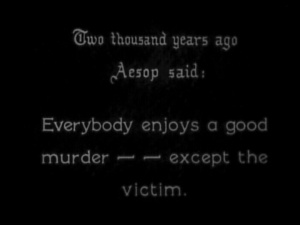 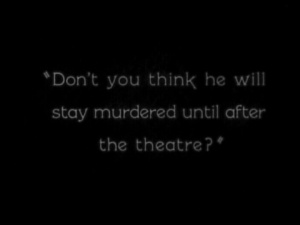 SPOILERS FROM HERE ON!

I absolutely love mysteries, especially of the Agatha Christie school, and so I am going to get just a little nitpicky at this point.

First, I should say that I appreciated that the film gave us the murder early instead of stringing us along. I never like it when a murder mystery that is advertised as a murder mystery gets stingy with the murder (i.e. WHAT WE CAME FOR) and refuses to introduce the guest of honor in a timely manner. Second, I loved the way Griffith kept trying to trick everyone into confessing in order to solve the murder in time for the theater. It’s perfectly in character and some of his tricks are only slightly removed from real police interrogation techniques. That being said, I had a few issues with the mystery portion of the story.

Red Herrings: One of the cardinal rules of mysteries and other pictures with plot twists is that the red herrings must make sense after the big reveal. If Colonel Mustard is caught purchasing cyanide then we need to know why he bought the poison. If he is not the killer but is really the red herring, his reasons can be silly but they just make sense within the context of his character’s behavior. Having him purchase it for no reason other than to mislead the reader is poor mystery writing and a cheat.

In You’d Be Surprised, Earle Williams’s character, Mr. Black, is the killer but he is always shown being in the next room when the murders and thefts occur. That’s fine but when Mr. White is killed, the whole point of turning out the lights is to give the thief a chance to return the necklace. Why would he do that if the culprit (and White knows Black is the thief, remember) is in the other room? If Black legged it to the other room while the lights were out, why didn’t anyone notice? It just doesn’t hold up.

Then there is an extended sequence of Griffith being prevented from retrieving an important clue (a celluloid cuff) by Grey, the knife-wielding valet. Alas, this red herring doesn’t stand up once the big reveals are finished. Grey is actually Griffith’s assistant and the only witness to the knife pantomime is Dorothy Sebastian’s character, whom Griffith has already declared innocent. So, um, why the big charade?

Speaking of which, it is never properly established WHY Sebastian is targeted for the frameup. Was her daddy a jewel thief? Did she dump Mr. Black last week? Just one title card would have done much to smooth things out.

When I first saw this film, I was distracted for some reason at the grand finale and got it into my head that Dorothy Sebastian really was the killer. (Griffith points the finger at her late in the film as a distraction tactic.) As one of the biggest names in the cast, Earle Williams was just too obvious and making Sebastian the killer would have been gutsy and interesting. I was obviously a little disappointed when You’d Be Surprised took the easy way out and let Sebastian off the hook. I guess she won’t be serving any time in Tehachapi with Brigid O’Shaughnessy.

You’d Be Surprised is a fun little mystery comedy as long as you don’t overthink the plot. The main attraction is Griffith anyway and his droll reactions to the increasingly bizarre situation are worth the price of admission. While not quite as brilliant as some of his other surviving starring roles, it’s well worth the watch.

You’d Be Surprised has been released on DVD by Grapevine.