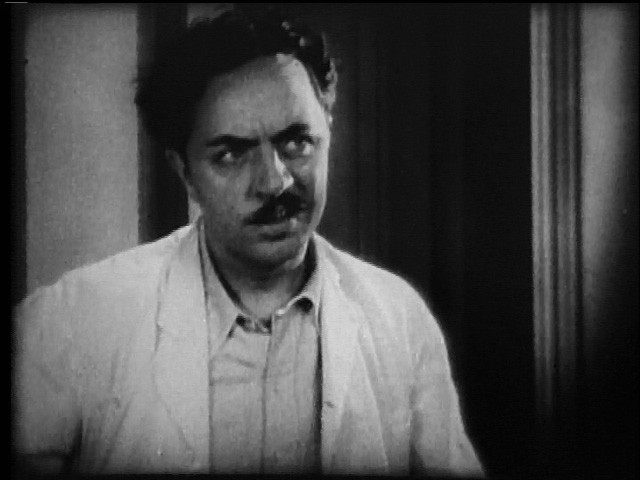 Bebe Daniels stars as a hypochondriac heiress who is threatened with a move to a ranch in Texas. She flees to what she thinks is a convalescent home but finds herself trapped on an island with a gang of rum runners– led by a pre-fame William Powell. Bebe doesn’t realize the danger she is in until it is too late. Will she be able to save herself and her only ally, Richard Arlen?

Everyone wants to feel her pulse!

Did anyone have a more varied career than Bebe Daniels? A child actress (she was the first on-screen Dorothy Gale to visit the merry old land of Oz), she branched into comedy as a teenager and found fame as Harold Lloyd’s leading lady.

From there, she jumped over to the Cecil B. DeMille camp and remade herself as a vamp, most memorably playing characters with names like Satan Synne and usually attempting to steal away Gloria Swanson’s husband. Then, Daniels returned to comedy, but this time as the star of the show.

Talkies were no challenge for Bebe. Her lovely singing voice ensured yet another successful career jump.

Feel My Pulse fits in near the end of Bebe’s career as a silent comedienne. Sound movies were still one year away from taking over the industry but the domination of the silent film was faltering.

Bebe Daniels specialized in making comedies that took a male-centric plot and reversed the genders. She was a lady Zorro in Senorita, had to squander a fortune in Miss Brewster’s Millions and abducted her man across the desert sands in She’s a Sheik, a feminized version of the Valentino hit. Feel My Pulse reunited Bebe Daniels with her She’s a Sheik co-stars, William Powell and Richard Arlen. It is not spoofing any particular film, though it shares a lot of plot elements with Reginald Denny’s comedy, Oh Doctor!

Bebe Daniels is Barbara Manning, an heiress whose father died when she was an infant. He left a very unusual will. Barbara is to lead a germ-free life for her first 21 years under the care of her fastidious Uncle Edgar (George Irving). Then, she is to live in the care of her Uncle Wilberforce (Melbourne MacDowell), a loud and proud Texan.

Barbara has grown into a full-fledged hypochondriac by the time Wilberforce comes fulfill his part of the will. Wilberforce believes that there is nothing wrong with Barbara that a little excitement and adventure won’t cure and he vows to take her to his Texas ranch. She, of course, has no intention of exposing herself to all those germs and decides to hide out in the island sanitarium that she inherited.

The problem? That island is located just outside the three mile limit. A gangster named Todd (William Powell) has turned the sanitarium into the headquarters of his rum running gang. Wallace Roberts (Richard Arlen) is the newest and handsomest member of this criminal enterprise. The gang is busy fighting off rival organizations and keeping a thirsty America well-supplied with hooch.

Before you can say “sounds like an unhealthy hospital!” Barbara shows up. She and Wallace immediately antagonize one another. She talks down to him and throws fits. He openly refuses to believe that she is sick. (Barbara claims to be a frail flower but is capable of climbing, jumping, sprinting… if she gets excited enough.) Todd, meanwhile, sees a chance to get his hands on her fortune.

Wallace, who doesn’t seem cut out for this criminal life at all, is worried about Barbara’s safety but she is oblivious. She busies herself dispensing medical advice to any gangsters she can find and exchanging her medicine for bottles of their, um, medicine.

Meanwhile, Todd has a plan to get Barbara’s money and he isn’t going to let anyone, especially not Wallace, get in his way…

I am a pretty big fan of Bebe Daniels. First, the woman just oozed talent. Second, she had this appealing independent streak but she was still able to play well with others. And, finally, she put out some lightweight little comedy gems. Feel My Pulse is one of her best available titles (many are lost or in vaults) and, while it is not a masterpiece, it still shows off what Bebe could do. She was lovely but was unafraid of taking pratfalls with the boys. She seemed dainty but had a tomboyish physical presence. And she could play kooky like nobody’s business.

Richard Arlen… I’m not gonna lie. The first time I saw him onscreen, my jaw dropped. He was just too handsome for me to process. I mean, like, wow. Most viewers will know him from Wings, which is unfortunate because I think he has been showcased better elsewhere. Like this film.

Mr. Arlen hit the big time in the mid-twenties but slipped from the top tier of stardom by the mid-thirties. Arlen’s acting gets very little respect from silent historians (even his IMDB profile as of this writing has a glint of snark).

Well, take a gander at Mr. Arlen in this film! He’s charming, heroic, mouthy… everything you could possibly want in a bootlegger (is is he?) hero. Added bonus: that fedora makes him look very much like a 20’s Indiana Jones. Hmmm, an idea…

William Powell is best remembered for his satin-smooth voice and his talent for comedy. His stint in villainy may seem odd in hindsight but without the benefit of that aforementioned voice, Powell could indeed have a villainous light in his eyes. Powell seems to be anticipating sound (the transition was in full swing in 1928) and plays the role in an understated manner. However, just because he is not melodramatic does not mean he is ineffective. I think villains who casually order murders are more frightening than the ones rant and rave. In any case, Powell seems to be having fun with the part, sometimes breaking the fourth wall to smirk at his own villainy.

Feel My Pulse was directed by Gregory La Cava, who would go on to direct William Powell in My Man Godfrey (Powell and La Cava both received Oscar nods for the film). La Cava had spent the ‘teens and early twenties directing short subjects. He still seems a bit raw with this film. The pacing could use some tightening (and the film is only an hour long!) and the cinematography is more utilitarian than anything.

After a punchy first act, the second act just meanders and features way too many intertitles that just aren’t that funny. Fortunately, the film is saved by a doozy of a climax that features a battle between bootlegger gangs, a daring escape and Bebe Daniels taking on the bad guys single-handed.

The silent era is known for its damsels in distress but the truth is far more interesting. Silent leading ladies were often smart, resourceful and sometimes even saved the day. A great example of this is the finale of Feel My Pulse. (Obviously, a spoiler warning is in place.)

How’s this for a plot?

A handsome but neurotic heir to a fortune is on the run from an uncle who wants him to find adventure and romance. He takes refuge in an island sanitarium, where he is befriended by a tough gangland beauty who is really an undercover newspaper reporter. The sanitarium is overrun by gangsters but when the leader of the gang tries to harm our hero’s newfound love, he overcomes his “illness” and defeats the villains single-handed!

Of course, you already know that this is the plot for Feel My Pulse with a male lead instead of Bebe Daniels. And you know what? It works.

That’s one reason why I like this film so much. The plot hinges on Daniels being a zany hypochondriac, not a zany woman hypochondriac.

Even better, the climax features the lady saving herself and her man!

Here’s the setup: Daniels exposes Arlen’s reporter identity to William Powell’s bootlegger to prove that he isn’t a traitor. Oops. Arlen gets bashed on the noggin and locked away for future disposal. At this point, Daniels loses her temper, dashes up the stairs and holds off the entire gang by throwing bottles and rolling barrels of their own hooch at them. Finally, she dumps a bottle of chloroform on the gang, knocking them out cold. When the police come, they find Bebe hacking down the door to Arlen’s prison with a fire ax. Nice work!

Some may argue that Feel My Pulse does not really feature an empowered woman since her acts of bravery were performed to catch a man. Again, I must emphasize the fact that this basic plot has been used again and again with reversed genders. The wimpy man finding courage and saves the day when his true love is in danger. I see nothing wrong with the ladies getting a piece of that action.

Another argument against the idea that Bebe’s character is empowered is the fact that she makes so many ditzy decisions. Again, I would argue that the ditziness is an essential ingredient to the basic plot. The hypochondriac and/or eccentric protagonist needs to have a hole to dig themselves out of. If they made level-headed decisions throughout the film, we wouldn’t have much of a comedy, now would we? And, again, the zaniness of Bebe’s character is based on her being a hypochondriac, not a woman.

Feel My Pulse does give in to one prevailing trope of its day: William Powell gets forceful with Bebe Daniels and Richard Arlen must rescue her. This is unfortunate but a very common way for filmmakers to build suspense. However, this does not detract from Bebe’s splendid performance at the finale.

So, next time someone says that the silent era was full of distressed damsels, pop in a copy of Feel My Pulse and marvel at a zany heroine saving a distressed dude.

On the whole, this is a cute and enjoyable comedy that showcases all three of its leads in the best possible light. Fans of William Powell will be especially interested in seeing his early villainy.

Feel My Pulse has been released on DVD-R by Grapevine.