French cameras capture winter scenes in Moscow almost a decade before the Russian Revolution would change the country’s culture forever. This unusually fine example of an actuality film was directed by Joseph-Louis Mundwiller, who would later successfully collaborate with Russian émigré filmmakers in France.

When discussing silent films with fans of the art, one observation is constantly brought up. Sometimes, the background scenery is more interesting than the film itself and the opportunity to travel back in time a hundred years or more is a large part of silent cinema’s appeal.

Moscow Clad in Snow is one of my favorite cinematic time capsules. It captures a place and culture that would be gone while the silent era was still at its peak. It’s a chance to see the Russia of the tsars before it was lost forever. (Moscow was a major city but not the capital of Russia at this point. St. Petersburg was the capital in fits and spurts and then a long run from 1732 to 1918.)

I should note that while actualities are not true documentaries (they are presented to share an experiences and are not really telling a story), modern reviewers—myself included—generally lump them into the documentary category for convenience. Moscow Clad in Snow has no particular narrative besides, “Look at the snow, the fish, the mushrooms!” but that’s very much in the style of the period. In that spirit, I will add a little tour guide commentary of my own along the way.

The film opens with shots of the Kremlin and then we get a glimpse of St. Basil’s Cathedral (and please stop mixing those two places up, people!) before being whisked away to see the Tsar Bell and the Tsar Cannon.

The Tsar Bell has never rung because it cracked during casting but it weighs 200 tons. Just a tiny little jingly bell, no big deal. Some people say it’s the heaviest surviving bell in the world but what do I know? (Casually polishes side of bell.)

The Tsar Cannon is similarly gigantic and similarly ornamental. Rumor has it that it was fired once to blast the cremains of False Dmitry back to Poland. (False Dmitry was the Perkin Warbeck of Russia.) This seems rather rude even if Poland did back a pretender to the Russian throne but we can take comfort in the fact that this is probably an embroidery on the historical record and that the cannon could not likely have reached Poland anyway, seeing as how it’s 600 miles or so from Moscow. That’s, like, 900 versts! 300,000 sazhen! Madness. If the story is true, the people with False Dmitry dust in their tea were probably other Russians. Sorry about that, guys.

Next, we see a marketplace with fish and mushrooms. The fish flash freeze in the cold and resemble planks as they are displayed by the merchants. The mushrooms are threaded onto strings and sold as bundles. Who could eat that many mushrooms? Russians, that’s who. Russia is a country of mushroom addicts and mushrooming is a national obsession. Not that there’s anything wrong with that.

Akhil Sharma traveled to Russia to experience the mushroom hunt and he returned with a wealth of anecdotes and colorful quotations about the mushroom culture.

“If you are normal, you search for mushrooms.”

“Those who need maps to find mushrooms, never find any.”

“When you quarrel, you go mushroom hunting and after an hour or two, you are friends again.”

Russia’s love of mushrooms is rooted in the quantity and quality of those tasty little fungi, as well as their usefulness as a meat substitute during Lent. The excitement of the hunt is certainly another factor and as no special equipment is required (beyond a mushroom guidebook), the activity is accessible to anyone who can make a trip to the country. As for the eating, I can highly recommend the traditional comfort dish of fried potatoes, mushrooms and sour cream. It’s heaven in a skillet and all for just 4,566,713 calories. But, seriously, try it. Yum!

The film continues with scenes from Petrovsky Park, a lovely forested area surrounded by cottages. It’s still there today and looks properly rustic, or as rustic as an urban park can be. As a conclusion, we get a shot of Moscow as a whole taken from some rooftop or other. (I’m afraid I am not familiar enough with the geography of Moscow to tell you exactly where I think the camera was located, though it looks a bit Kremlin-ish. So, “some rooftop or other” will have to do unless an expert on pre-Revolution Moscow is present.)

And that is our whirlwind tour of Moscow. I don’t know about you but I had a blast. The film has that charming scripted/unscripted quality found in many actualities. While the shots are carefully composed and the entire film has a professional sheen, the people captured on film behave the way everyone does when a camera is about. Some mug, some hide, some stiffly pose, some get into the spirit of things and some seem to lose interest before the shot changes. 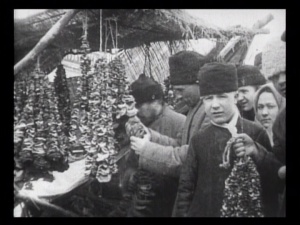 The film was shot and directed by Joseph-Louis Mundwiller, an Alsatian cinematographer employed by Pathé Frères, one of the few foreign studios to take an interest in Russia and its nascent film industry. Mundwiller would later work with the Russians who fled the 1917 revolution and settled in Paris. His work can be seen in Tales of the Thousand and One Nights, The House of Mystery, The Burning Crucible, and Kean. Likely, his stint in Russia helped make his collaborations with émigré filmmakers successful. (He also worked on productions with French directors, most notably The Chess Player and Abel Gance’s Napoleon. And he collaborated with Polish-born director Jean Epstein on whatever the heck Lion of the Moguls was.)

Moscow Clad in Snow is of enormous interest to history buffs, Russophiles and devotees of documentary films. It’s a priceless chance to take a tour of a lost world and I highly recommend seizing the opportunity.

Moscow Clad in Snow is available on DVD as part of The Movies Begin box set from Kino Lorber. The film is accompanied by Alexander Borodin’s In the Steppes of Central Asia. (Borodin was the illegitimate son of a Georgian prince. He was also a chemist, a cat rescuer and a women’s rights advocate. In short, a generally awesome man.)