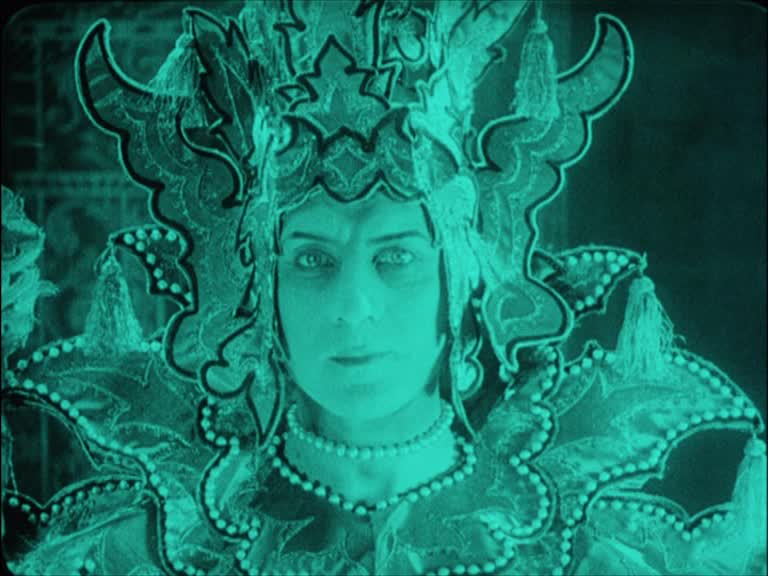 The Lion of the Moguls (1924) A Silent Film Review

Ivan Mosjoukine steps off the deep end in this genre mishmash. He plays a Tibetan prince who must flee his country and ends up in Paris where he becomes a film star. Speaking of stars, there is also a plot twist that we are most familiar with in Star Wars.

No, this is not a Louis B. Mayer biopic. I doubt he would wear the shorts.

Before we begin, a note to fans of director Jean Epstein: I’m afraid this review won’t be covering his work extensively. I have a large box set of his silent stuff and I have embarked on a leisurely journey through his career. The Lion of the Moguls is the only Mosjoukine film in the box and I would like to discuss it in the context of the star’s career rather than that of the director. However, do not despair. As I said, I have been I have been engaged in a bit of Epstein viewing and will be reviewing some of his pictures at a later time. (Yes, The Fall of the House of Usher is in play.)

As readers of this site know, I am a pretty big fan of Ivan Mosjoukine. A Russian actor who found wild success in French cinema, his films often accomplished that rare feat of being critically acclaimed crowdpleasers. The Lion of the Moguls was released at the height of his fame and popularity but it does not have a good reputation with modern viewers. Of course, this is an intriguing mystery for me and so I set out to see if that reputation is deserved.

The story opens in Tibet. The royal throne is presently occupied by a usurper who named himself khan. However, he fears the popularity of a palace guard called Prince Roundgito-Sing (Ivan Mosjoukine). The prince is beloved by the people and seems to have no interested in deposing the khan but then everything changes. The prince’s beloved (can’t remember if she had a name and can’t be bothered to check) is taken to the “tower of pleasure” by the khan and Roundgito-Sing rescues her. The khan’s guards pursue, the beloved is taken and the prince is forced to flee alone.

And so he stumbles to the ocean and books passage on a steam ship that is currently transporting a French film crew… Wait, huh? You see the film had established itself as kind of an Arabian Nights fantasy and now we’re in the real world? Why are the khan’s guards still using swords? If European ships are to be found a day’s journey away, why not trade some gems for some howitzers? Okay, I have been jarred but let’s continue.

The star of the production is Anna (Nathalie Lissenko) and the money man is Morel the banker (Camille Bardou). Prince Roundgito-Sing plays with the electric lights and then stumbles into a movie scene being played out on the ship. He doesn’t realize it is make-believe at first but Anna explains all because she can speak the prince’s language.

If you or I were to unexpectedly run into someone fluent in our native tongue while abroad, I think we would ask a few questions. Not the prince! He’s too smitten with Anna to ask even basic questions. She decides she will make him her co-star and let him design all the movie sets because that’s exactly how the movies work. (It’s amazing how often movies get the business of moviemaking all wrong.)

Morel the banker is jealous and so he tricks the prince into writing a bad check. The prince spends all his money on flowers for Anna and she claims that she is not interested in him as a lover, she just thinks he’s a good actor.

The movie finally jumps the shark after the prince is dumped and we spend an interminable ten minutes watching him feel depressed at a shady dive. It’s a frivolous scene, one that should have been done in one or two minutes. Stretched out to five times that length, it’s excruciating. Roundghito-Sing mopes and shouts and drinks and rinses and repeats over and over and over and over… And then the camera twists and twirls and Mosjoukine emotes and I want to kill everyone.

Morel is a villainous villain and he sees that the prince and Anna will surely get together soon and so he springs his trap, reporting our hero for writing rubber checks. His reactions are so over-the-top, his behavior is so villainous that I have the feeling mayhaps Mr. Mosjoukine was overdrawn at his financial institution when he wrote this screenplay. The prince and Anna go on the run and Morel follows, determined to destroy his rival because reasons.

After all this buildup, the villain is neatly dispatched by the prince’s convenient bodyguard and our hero is saved from a police sting thanks to a bellboy ex machina. And then things just sort of get crazy. (Spoilers ahoy.) Anna helps the prince disguise himself at a convenient masked ball and he asks her why she is helping him. Turns out she is the crown princess of the Moguls and she escaped a coup that killed her father and brother. But then the convenient bodyguard shows up and states that he hid the brother and disguised the prince… as a prince? Roundgito-Sing is really Anna’s brother.

(Spoilers continue apace.) Um, ew. So, the woman the prince has been chasing since he stepped onto that boat, the woman who sent him off on a drunken bender when she rejected him, is his sister? (Pours Listerine into mouth through funnel.) WHAT THE HECK, GUYS? Sheesh! Anyway, Anna and the prince return to their homeland, he apparently marries the chick he forgot about once he met his… (gags) sister and everyone lives happily ever after. The end.

The biggest problem with The Lion of the Moguls is its screenplay, credited to Mosjoukine. It simply tries to do too many things, be too many things, at once. We start with an Arabian Nights-style fantasy, classic orientalism, and then the film turns into a behind-the-scenes look at moviemaking whilst Mr. Mosjoukine is off playing at some kind of fish out of water comedy. Then it turns into a conspiracy picture, with Morel scheming to destroy the prince because mwahahahaha. Then it turns into a character piece about the prince’s descent into alcoholism. And then we’re back to conspiracies! And the Arabian Nights!

This mad, anything-goes style succeeded in The Burning Crucible (which Mosjoukine wrote and directed) but that film worked within the bounds of pulp spy/mystery conventions. It didn’t suddenly add in a scene from, say, a science fiction movie. The Lion of the Moguls doesn’t really know what it is and this causes big problems for the story as the audience is dragged out of one genre and forced to acclimate to another again and again. The whiplash proves fatal.

You see, in order to pull off this mad mix of genres, filmmakers need to be aware of how they can potentially confuse and/or annoy the audience and prepare for it. Meta humor, breaking the fourth wall, establishing a movie world played for laughs… these are all options. The Lion of the Moguls is just sort of glued together with chewing gum and string. It’s not a pretty sight.

Mosjoukine enters with a stack of notebooks.

Mosjoukine: Gentlemen! I have finished the new screenplay.

Epstein: Splendid! What sort of film will it be?

Epstein: But surely you can describe it. Which genre will it be?

Mosjoukine: All of them, my dear director, all of them.

I’m not going to be too hard on Mosjoukine as he proved to be a clever collaborator on many occasions. It’s just that we all have to fail once in a while and this is a rare case where his grasp exceeded his reach.

This leads to an interesting question: At what point do artistic flourishes descend into pretentiousness? As with everything else, it depends on your point of view but I do feel that the crazy quilt plotting did the film’s more daring sequences few favors. In comparison, Variety (1925) was a film that valued style over substance and it hung its brilliant camera work on a stale and clichéd plot. However, the filmmakers always understood they were making a drama of jealousy and they used this familiar story to give audiences a point of reference for the unchained camera. Variety was also better at consistently applying its artistic flourishes. As with everything else about The Lion of the Moguls, the stylistic tricks are employed in random, odd places.

Individual components of the film work but the whole thing has a rather Frankenstein quality about it. Epstein’s direction is simultaneously modern (for the time) and stodgy, with rapid cuts and graceful pans that don’t do much to elevate the mood or reveal the characters’ emotional states followed by static shots of big rooms. In one particularly odd scene, Morel and Roundghito-Sing spend the time looking one another up and down as the camera pans from their face to their feet and back again. I wanted to shout at the screen: “WHAT, WHAT is so important about their feet?” We never find out.

Mosjoukine’s performance is as erratic as the story and the direction. It’s like he’s trying to stitch together various acting exercises into one performance and it doesn’t work well at all. His character is too flighty and there’s no way to get a handle on what he is trying to do. One minute he is risking life and limb for the ostensible heroine and then he flees to Paris and forgets all about her in an hour or so. It’s bizarre.

However, as always, I like Nathalie Lissenko. She tended to be a more restrained, grounded performer than Mosjoukine and they play off each other well; her more down-to-earth performances provide an anchor for his flights of fancy. In this case, Mosjoukine flies to the sun and gets singed but Lissenko emerges as a calm and likable leading lady. For more examples of the Mosjoukine-Lissenko chemistry, check out The Burning Crucible and Kean. In both cases, Lissenko is the sensible half of the couple whose presence saves or damns Mosjoukine.

The Lion of the Moguls is a deeply flawed film. It’s interesting in a car wreck sort of way but the pretentiousness and genre hopping destroy its artistic integrity. Individual components work but in the end, the whole is less than the sum of its parts.

Available as part of an outrageously expensive Jean Epstein box set. While the film is so-so, the presentation is pristine. The excellent piano score by Mathieu Regnault does improve the experience considerably.