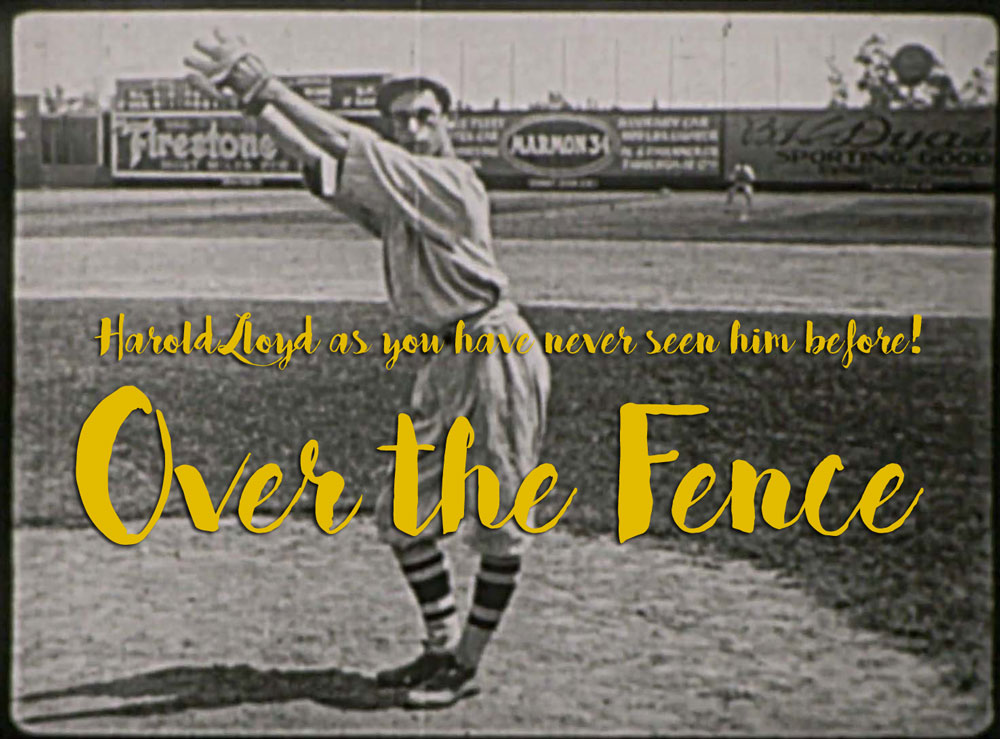 Harold Lloyd dons his famous spectacles for the first time and makes movie history as a boy who just wants to take his girl to a baseball game. Of course, Snub Pollard is in the way and chaos ensues but the real fun is seeing Lloyd’s evolution as a comedian.

This is my contribution to the CMBA’s Underseen and Underrated Blogathon. Be sure to read the other posts!

(A huge thanks to Christopher Bird for providing the film for viewing and for all his help in researching the review.)

As a moviegoer of 1917 to describe Harold Lloyd and they would instantly associate him with the Lonesome Luke series. Lonesome Luke was a goofy character who wore loud, striped clothing a few sizes too small, along with a dinky mustache. Lloyd had assembled a core cast with the teenage Bebe Daniels as his leading lady and Snub Pollard as his co-conspirator or antagonist. The shorts were successful. People like them. Great news for a young comedian, right?

And yet… Lloyd wanted more. (This is the point in a Disney movie where he would burst into song.) Like all acclaimed inventions, the credit for the Glass character is debated. Was it Lloyd all by his lonesome? Was it Hal Roach? Were the glasses spotted on comedian Earl Monahan first? In the end, what matters is that the creators of the Lonesome Luke series felt that they had taken him as far as he could go and were ready for a change. And by change, I mean glasses.

Pathe, the distributor of the Lonesome Luke series, agreed to allow Lloyd to try out this new character, though he still had to keep his old one going for a bit as insurance. According to Jeffrey Vance’s Harold Lloyd: Master Comedian, Lloyd’s first Lonesome Luke comedy had been baseball-themed and his new character would receive the same treatment as a good luck charm. And on September 9, 1917, at the age of twenty-four, Harold Lloyd released Over the Fence and introduced his new and improved comedy persona to the world.

Harold Lloyd is works in a men’s clothing emporium with Snub Pollard. (His character was originally called Ginger but the reissue print I viewed uses the more familiar Harold.) When Snub accidentally cuts off the tails of a customer’s coat, Harold discovers baseball tickets inside. The perfect date! He immediately calls Bebe Daniels to ask her to go with him to the game but what he doesn’t know (da-da-DUM) is that Snub has stolen the tickets from his pocket.

Harold ends up at the game with Bebe but without the tickets and without money to buy more. Snub take the opportunity to horn in on Harold’s romance and asks Bebe to accompany him inside. Now, you just know that Harold is going to do something about that!

Unable to enter through the front, Harold dashes in through the players’ entrance and is mistaken for an out-of-town champion player. He is sent out to pitch at once. (I had a great deal of fun looking at the vintage stadium advertisements in the background and I think you will too.) After some comical warmup moves, Harold gets down to business—and he’s fabulous! He’s so good that Bebe is cheering him from the stands. Next to Snub. Uh oh!

What comes next is an enthusiastic brawl in which Lloyd nearly loses his glasses. (Look closely, this is the closest you’ll get to seeing the Glass character with a naked face on the screen.) Of course, Bebe is a loyal girlfriend in the end and the happy couple reunite but I have a question: if Harold is so good at baseball, why the heck is he wasting his time working retail?

Lloyd was not a spontaneous comedian. That’s not an insult, just an observation of style. Nothing came to the screen by chance and he honed his product to perfection before embarking on his new venture. His new character’s glasses involved a long and arduous search to find the perfect size and shape. Lloyd’s careful planning paid off as the glasses became more than just eyewear.

Lloyd wrote: “The glasses would serve as my trade-mark and at the same time would suggest the character – quiet, normal, boyish, clean, sympathetic, not impossible to romance. I would need no eccentric make-up, ‘mo’ or funny clothes. I would be an average recognizable American youth and let the situations take care of the comedy.”

Lonesome Luke films are not terribly common these days but I can give you my impression of the ones I have seen and… they’re not bad at all. Solid slapstick. If Lloyd had kept making them, he would be fondly remembered but he would not be an icon. The crazy clothes and behavior of Luke limited the stories in which he could perform.

In contrast, Over the Fence is basically a classic Lonesome Luke plot but there’s something else going on, some little bit of movie magic. We never particularly cared if Luke won or lost but this new boy makes us care very much. Sure, he’s not as polished as he would be in his later films but there’s definitely something new at work.

You can also see shifts in Lloyd’s interactions with Daniels and Pollard. Previously, Pollard and Lloyd had been on equally weird footing but the Glass character’s more subtle appearance tips the scales and makes him seem like the sane one in the loony bin. And, as Lloyd said, this new character is not impossible to romance. His nerdy cuteness makes him downright appealing as a leading man and Bebe Daniels reflects this in her performance.

Over the Fence lacks the gloss of Lloyd’s later films but it is a chance to see film history in the making and to appreciate the evolution of this talented funnyman. Essential viewing for fans of silent comedy.

Over the Fence is available for free and legal viewing on YouTube courtesy of Christopher Bird, who has combined two prints from his 9.5mm collection for this release. There are other versions floating around online but they are blurry and/or missing a reel. While this is an abbreviated version of the film, you will find that the action is easy to follow.