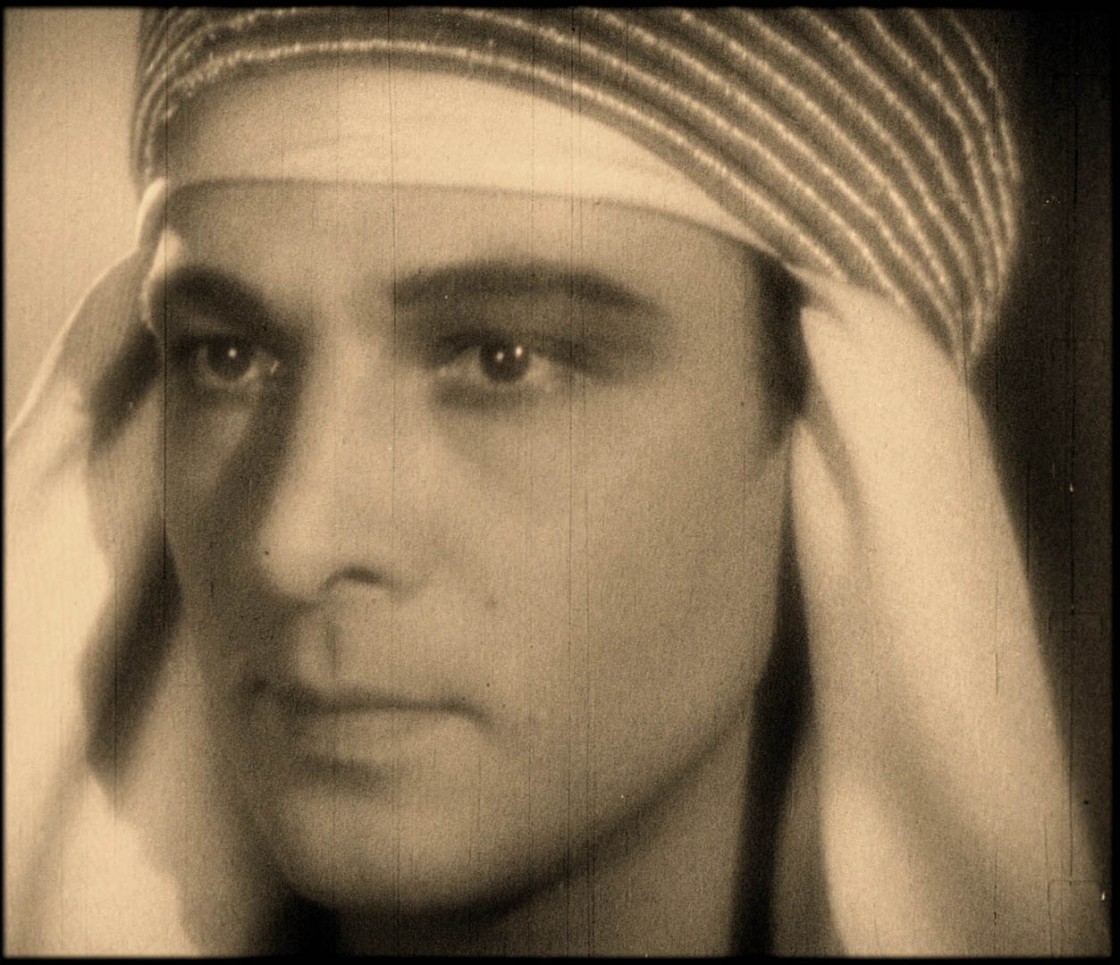 Unboxing the Silents: The Son of the Sheik on Bluray!

Unboxing the Silents by Movies SilentlyMay 17, 2017

Rudolph Valentino’s final film and one of his biggest hits, The Son of the Sheik has come to Bluray at last and I have all the details! Let’s take a peek at this highly anticipated disc.

As always, a huge thanks to Kino Lorber for providing a review copy of this release.

Please also note that this is a review of the edition of the film, not the film itself. (If you want to read that, just click right here. Enjoy!)

This film has many delights for fans of The Sheik. Agnes Ayres returns as Diana, Valentino plays his own father and we get more sandy rides across the desert. Of course, there are also improvements. Vilma Banky is a far better leading lady than Ayres, the costumes are more elaborate and sophisticated, George Fitzmaurice does a smashing job as director and Valentino’s acting has improved enormously. That being said, I still slightly prefer the hokey original to the sleeker sequel.

The Son of the Sheik is often described as tongue-in-cheek but I think that’s not quite the right way to put it. Rather, it’s self-aware and slightly winking but the dramatic scenes are meant to be taken seriously.

The Sheik and its 1926 sequel, The Son of the Sheik, will both be released by Kino Lorber on DVD and Bluray on May 30, 2017. You can read my unboxing of The Sheik here.

The opening title states that this edition’s source material is a reissue print from the Killiam collection (as was the case with the old Kino DVD) and I believe the film’s frames are a little tight as a result. It’s not a deal-breaker and the quality is generally excellent in this release. There are a few scenes with some slight blowout but nothing outrageous. The film is attractively tinted in gold, sepia and blue throughout to illustrate day and night scenes.

Overall, the movie looks great. But don’t take my word for it, have a gander yourself:

(All images are unaltered screen caps from the Bluray edition. I have cropped the pillarboxes but have not changed them in any other way.) 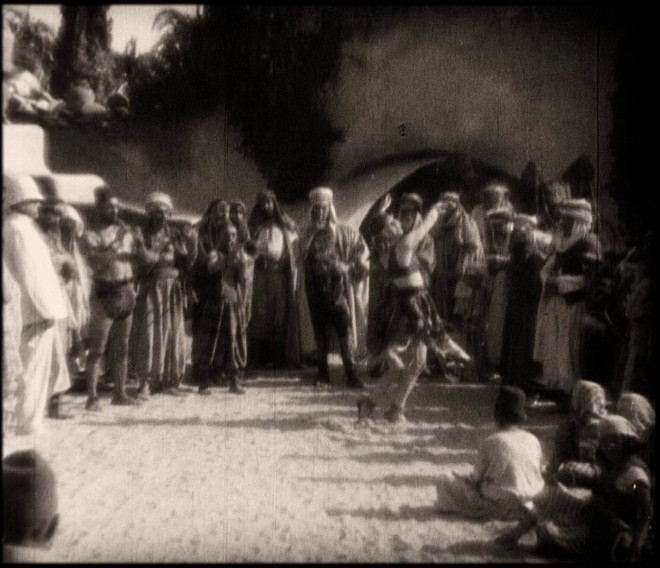 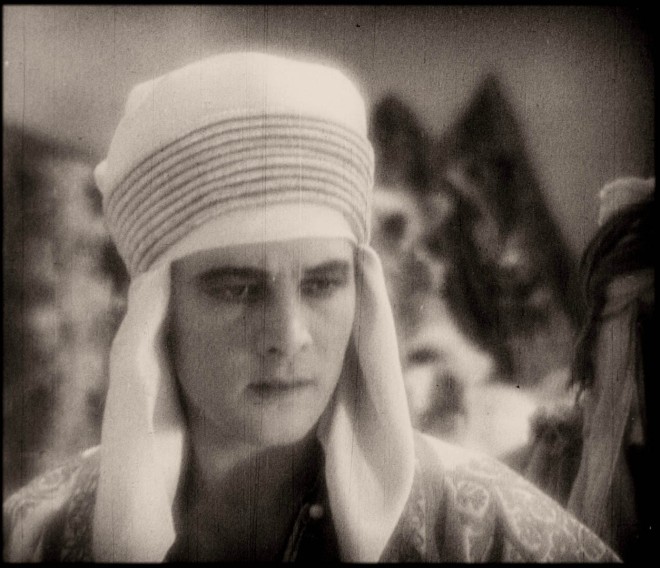 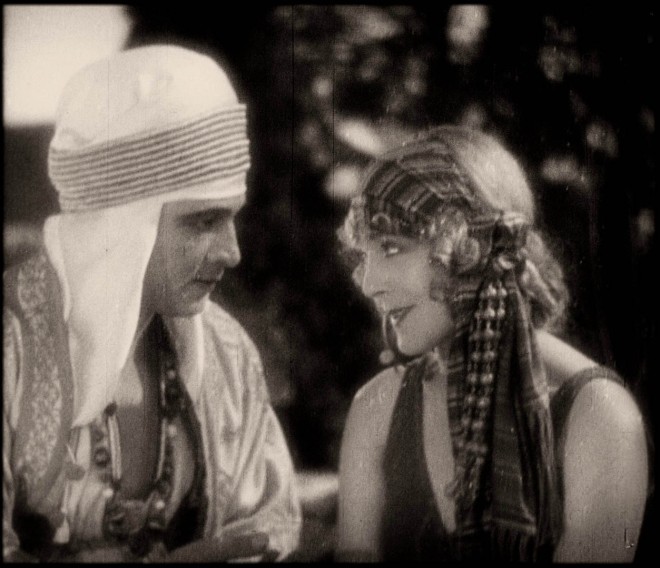 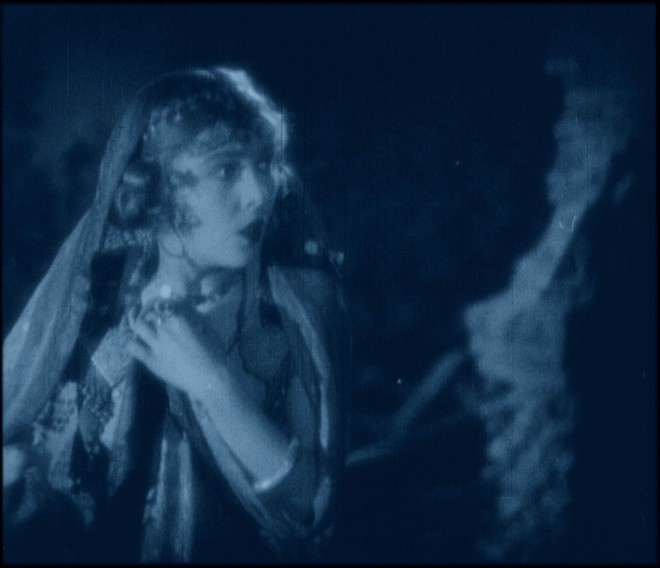 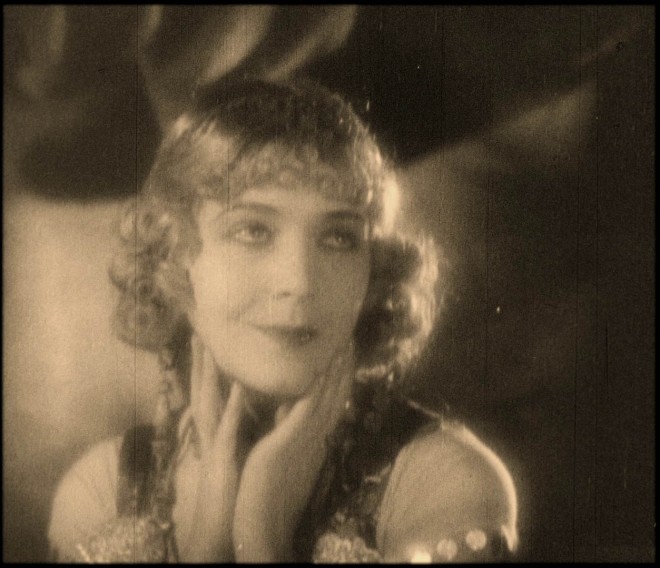 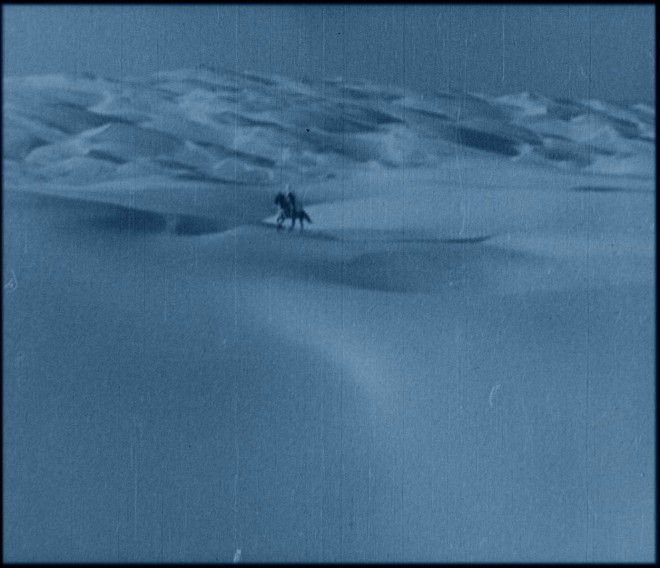 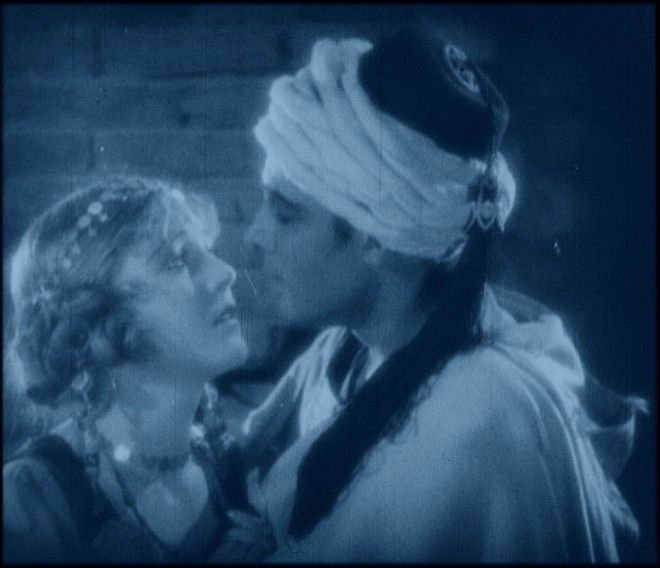 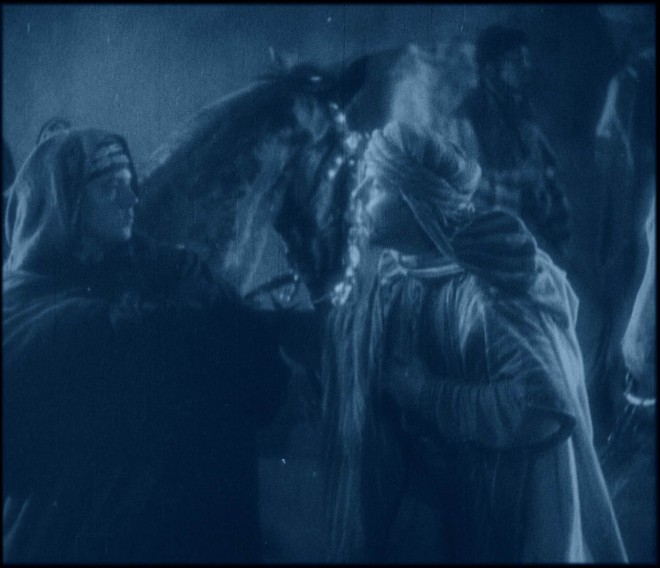 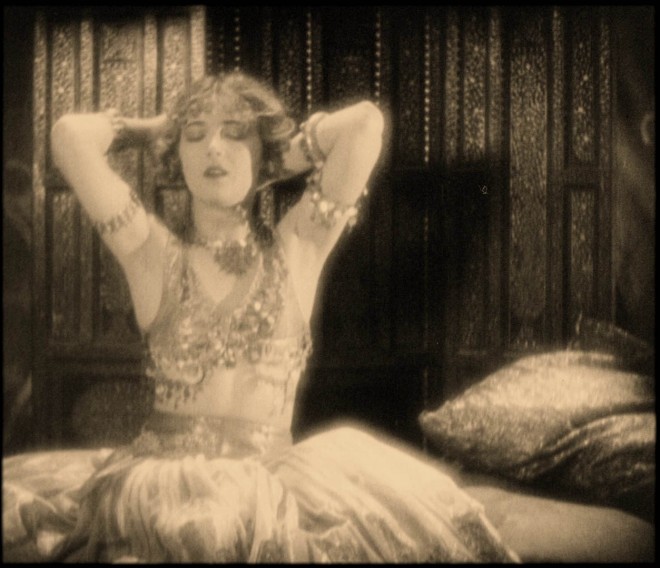 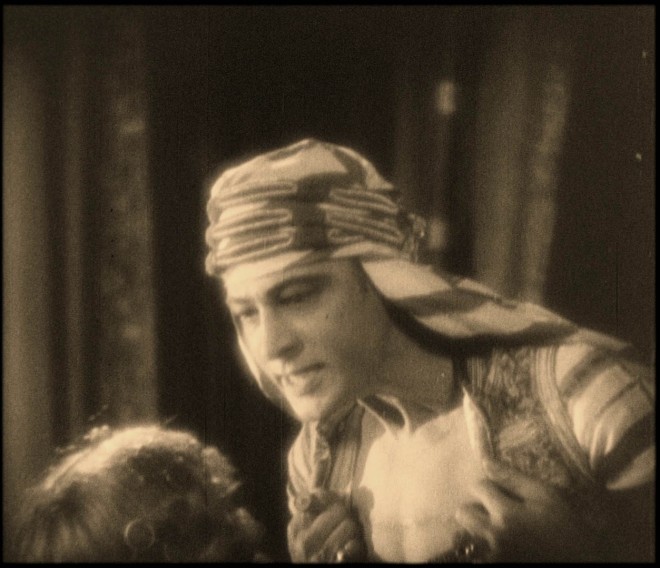 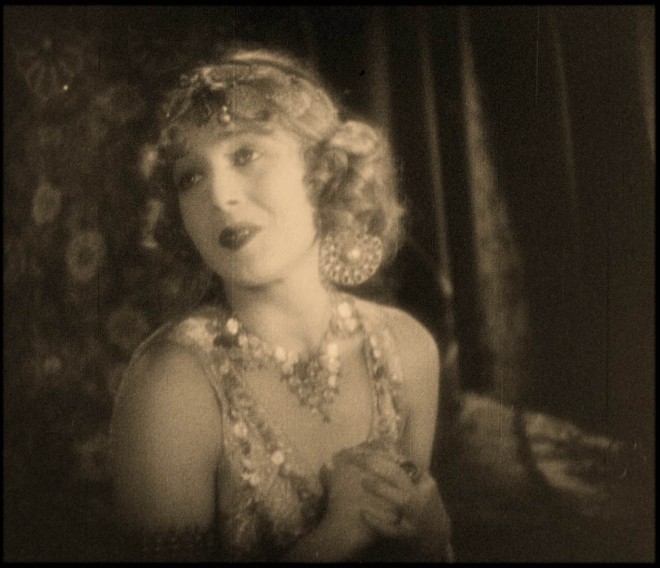 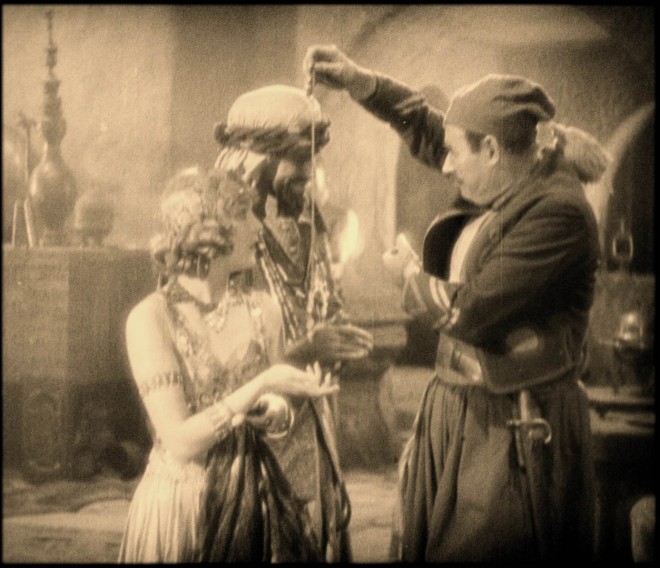 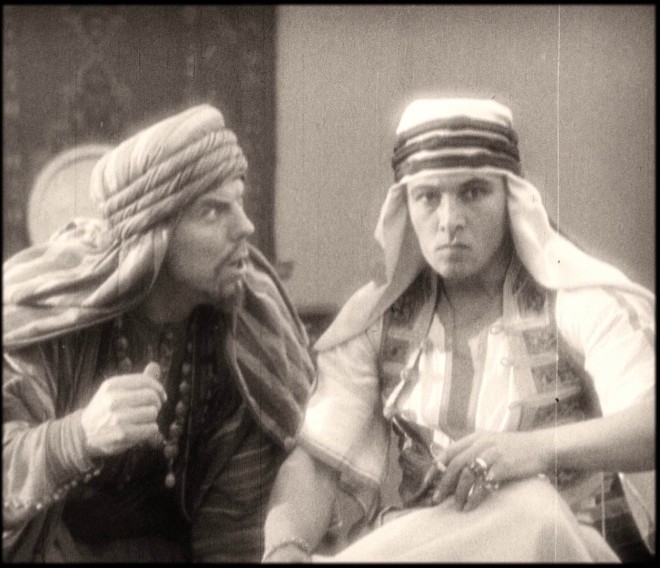 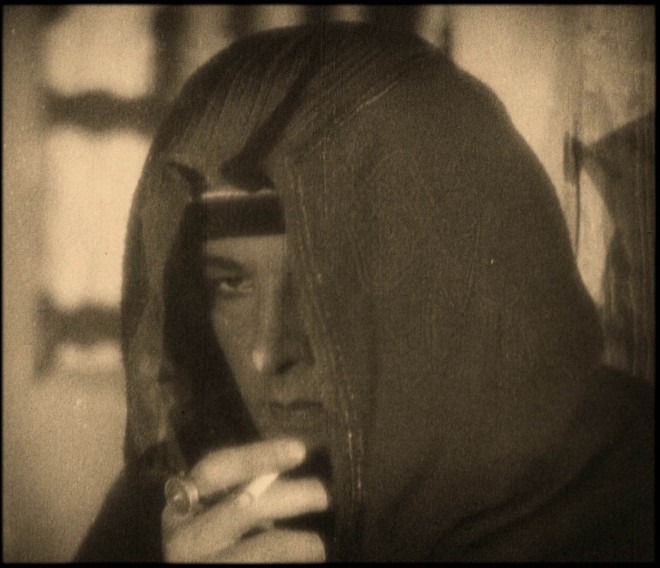 The film is accompanied by a score from the Alloy Orchestra and it is heavy on synths and percussion. (I don’t usually get too deeply into score stuff but I know it will come up in this case so…) I really enjoy the Alloy Orchestra’s work myself, I find it fresh and zippy with just the right touch of the exotic. However, I do realize that they are not everyone’s cup of tea. Here is a brief sample clip to give you an idea of what to expect:

I am absolutely NOT a purist when it comes to film music and I enjoyed the heck out of it but, of course, every silent movie fan has their own taste and preferences.

An intro by Orson Welles. It is of dubious scholarship (sorry, Orson) but there are some nice clips of early Valentino.

Valentino: His Life and Times, a mini-documentary made during the silent era.

The Sheik’s Physique, a short subject on you-know-what.

The Italian trailer for The Young Rajah, a lot film. Way to tantalize us!

A slideshow of newspaper headlines discussing Valentino’s final days, his illness and his death.

This release looks and sounds wonderful. It is definitely recommended to Valentino fans, especially ones with Bluray players. It’s available for preorder and definitely worth the purchase.