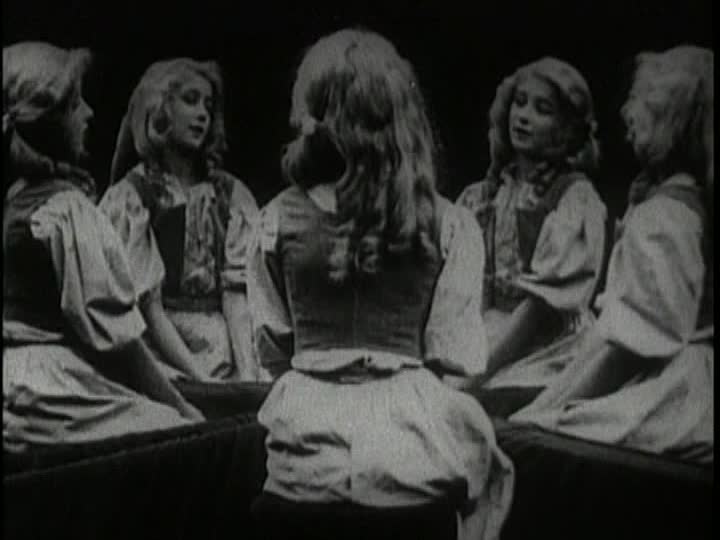 Oz was much more than just Dorothy and Toto. In this case, we have fairies, an enchanted cloak, soup-obsessed villains, men in donkey suits, bandits, evil leaping monkey things, strange coronation rituals and a heroine who goes by the name of Fluff. Say what you will about the land of Oz but it was never boring.

Home Media Availability: The film is available on DVD and on Blu-ray.

Is it possible to make a good Oz movie? The question may seem absurd today given the evergreen popularity of the 1939 Judy Garland version. In the thirties, though, it would have been seen as a very legitimate inquiry. You see, the merry old land of Oz had not enjoyed sterling success at the box office.

Some of you may be familiar with the disastrous Larry Semon version of The Wizard of Oz. (You can read my review here.) After campaigning for the rights to film Oz, Semon tossed out most of the original tale and substituted it with dubious comedy, racism and projectile vomiting ducks. The film didn’t bomb exactly but it wasn’t a big enough hit to justify its production costs. (And, contrary to popular belief, it did not take down its studio.)

Ah, but Mr. Semon’s mistake was getting rid of the original story! If L. Frank Baum had been alive and in charge, none of that would have happened. Creative control for the artist! Down with the Man! Power to the people, you dig? (And other assorted sixties-type phrases.)

The theory makes sense. Oz is a strange and wonderful place. Who could possibly do a better job of translating it to the screen than the man who created the fantastic land? Surely, he would understand the delicate balance needed to make an Oz film successful.

Well, a little-known fact is that Mr. Baum did make Oz movies. In fact, he partnered with composer Louis Ferdinand Gottschalk (not to be confused with the far more famous Louis Moreau Gottschalk) and formed the Oz Film Manufacturing Company in 1913 with the express purpose of bringing the Oz stories to the screen his way. (Baum had been contractually forbidden from providing creative input for the 1910 Selig Oz films.) The Magic Cloak of Oz (sometimes just called The Magic Cloak) was the very first of these films to be released.

The movie opens with a group of transparent fairies creating a magic wishing cloak under the gaze of a Melies-esque moon. Once they have finished, they are unsure what to do with the enchanted garment. (Psst! I think you’re supposed to figure that out before you make it.) The moon advises that they give it to the unhappiest person they can find. (Another bad idea. Unhappy people are not always deserving. Sometimes they are unhappy because they are mean and nobody likes them. I mean, Lavrentiy Beria, mass murderer and would-be Stalin successor, was pretty unhappy right before he was executed but I am not sure that giving him a magic cloak would have been terribly smart.)

Anyway, the hero and heroine of the story are siblings named Bud (Violet MacMillan, women playing boys was quite common) and Fluff (Mildred Harris, a few years away from becoming Charlie Chaplin’s first wife). Their father has drowned and they set off for the city with their donkey friend, Nickodemus (Fred Woodward). The fairy’s messenger hands the cloak over to Fluff along with the rules for its use. It holds one wish per owner but the cloak may only be given away. If it is stolen, it loses its power.

As it turns out, the city that Fluff and Bud are heading to is the capital of Noland, a nation that has just lost its king. There is no heir and so the royal council must follow the law of the land. They stand by a particular gate and the 47th creature to enter is made the new monarch. This plan is flawless! Although it seems to make as much sense as the genetic roulette that is monarchy by blood succession. “Oh dear, the king is dribbling again.” “Phooey, no state business today. The grand duke is playing with his dolls in bed.” “Don’t bother the king now. He’s executing his tutor. That will teach him not to give the royal student a C-.”

So Bud becomes the king of Noland and he and Fluff proceed to blow the entire royal treasury on toys. Hmm. Maybe the dribbling, doll-playing tutor-killers weren’t so bad after all… Nickodemus runs away and has unrelated adventures that take forever. There is also Queen Zixi of Ix (listed as Juanita Hansen, I am not convinced, the actress seems to have a much longer face), who plans to obtain the cloak by hook or by crook.

The main villains, however, are not introduced until near the end. They are the Rolly Rogues and they are described as having no judgment. This is borne out by the fact that they eat buttons and hairpins and are obsessed with soup. Finally! Characters I can relate to! I love soup too. Adore it. You should try my loaded baked potato soup. It is amazing, if I do say so myself. I also make a chicken noodle soup with caramelized leeks… oooo, I want soup!

Anyway, the Rolly Rogues spot Noland and decide that there must be a new kind of soup to be had there, so they declare war and attack. Well, it seems as good a reason for war as any. Noland immediately falls because, come on, their new king just spent the entire royal treasury on toys. Would a band of spherical soup fanciers really be worse rulers? Find out if you decide to watch The Magic Cloak of Oz.

And, yes, that was just as weird to watch as it was to write about.

Reviewers who are unfamiliar with the films of 1914 sometimes get excited about the supposed technical marvels of The Magic Cloak of Oz. “Impressive for the time,” they say. Nonsense! While I appreciate the sentiment, we mustn’t defend silent film by spreading falsehoods and misunderstanding. This movie is crude and audiences of 1914 would have recognized it as such. It may seem impressive compared to, say, The Great Train Robbery but that movie was made in 1903. 1914 was an exciting and fast-moving year for the movie industry. New innovations were being projected onto the screen every day.

Look at Fantomas, which was made a year earlier. Look at Cinderella, which was not the most technically proficient film of 1914 but still manages to be leaps and bounds ahead of The Magic Cloak of Oz. Our Oz film makes crude use of double exposure but it is unimaginatively framed and it aches for close-ups. The animal costumes look like something out of a school play. Maurice Tourneur’s 1914 confection, The Wishing Ring, puts this Oz to shame on these scores.

Worse, in Oz, the actors are constantly turning their backs to the camera. I’m not talking about that old trick where hams would try to turn their co-stars so that they had the frame all to themselves. All the actors in the scene turn around. It’s very distracting.

That being said, for all its crudeness, The Magic Cloak of Oz still manages to charm. The school play element of the thing is at least consistently applied and I liked Mildred Harris quite a lot. I also liked the actress who played Zixi, though I grow more and more convinced with each viewing that she is not Juanita Hansen.

It’s definitely crude going but there is a certain fascination in seeing the world of Oz as its creator wanted it to be seen, although the film clearly did not come out as intended.

The Magic Cloak of Oz was cut down from five reels to three before release and seems to have been a box office disappointment. Other Oz titles followed but the Oz Film Manufacturing Company was doomed.

While the film is not exactly masterful film-making, there is still much for fans of early cinema, fantasy and Oz to enjoy. It is certainly a darn sight better than the 1925 Larry Semon version, though that is admittedly setting a low bar.

The Magic Cloak of Oz has been released in several versions. I like the one included with the 2005 DVD set

of the 1939 film. It also has the other surviving silent Oz films. The Magic Cloak of Oz has a humorous organ score by John Thomas. There is also the budget Alpha release

but that version has a few minutes of missing footage.