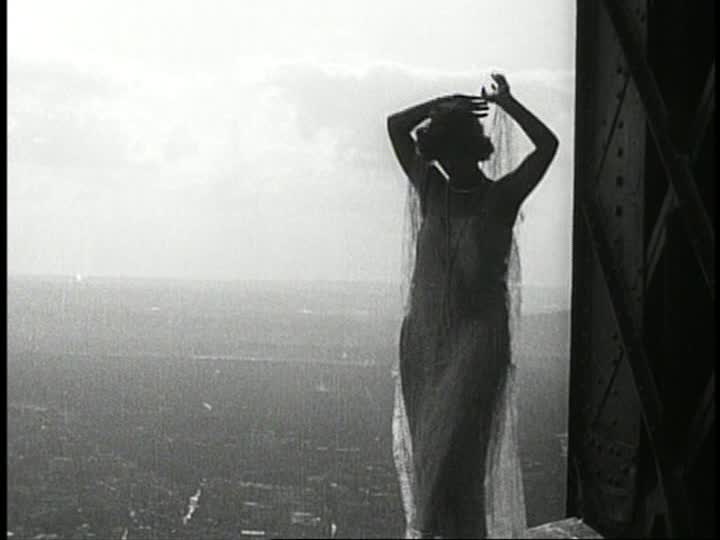 René Clair’s first film as director, this is a quirky little science fiction comedy about a mad scientist and a special ray that freezes the entire city of Paris. All of it except for the very top of the Eiffel Tower and the night watchman sleeping there. What will he do now that he is the king of a frozen city?

René Clair was one of the most sparkling lights of later French silent film and early talkies. His nimble, clever films are exactly the sort of thing I enjoy watching and reviewing but his reputation has tarnished a bit over the years. This means that he is right up my alley and so we are starting at the very beginning. Paris qui dort aka The Crazy Ray aka At 3:25 — whatever you call this picture, it was Clair’s very first as director. (The release date is also all over the place, ranging anywhere from 1923 to 1927. I shall take the earliest but the assorted names and dates of this picture did not make my life easy, let me tell you.)

I should note that the only version of this film that available on home media is a recut performed by Clair himself decades after its release. It runs only 34 minutes. (A 67-minute restoration has been screened at film festivals but, alas, I have not had a chance to view it.) As a result, I will not be commenting on the editing of this picture as it can rightly be viewed as anachronistic. (Charlie Chaplin gave many of his silent features the same treatment with The Gold Rush as the most drastic example. Archivists reportedly caught D.W. Griffith in the act and prevented him from doing too much damage to his older works. And then there’s George Lucas and his big pile o’ CGI junk… Directors can be a menace to the own legacy and I propose arming archivists with squirt guns so they can stop this kind of thing. At least Steven Spielberg repented and promised never to do it again.)

The hook is simple, high concept stuff:  the watchman of the Eiffel Tower (Henri Rollan) wakes up one morning to find that Paris is frozen. A policeman and thief with a stolen watch in his hand are frozen mid-pursuit. (The watchman takes the opportunity to exchange his timepiece for the better one that the thief stole.) Taxi drivers are frozen in their cabs. Diners are frozen in their chairs at restaurants. It’s eerie and terrifying.

(By the way, I’ve heard this described as one of the first science fiction films. Not even close, kids, not even close.)

Our watchman is not alone. A small plane lands and four passengers disembark: a thief (Marcel Vallee), a young lady (Madeleine Rodrigue), the pilot (Albert Prejean) and a rich man (Antoine Stacquet). They soon run into the watchman, who is thrilled to find other people are unfrozen. Whatever has frozen Paris must only affect people below a certain altitude, which is why the top of the Eiffel Tower and the airplane both escaped freezing.

As a surrealist, Clair uses science fiction trappings to explore human reactions to an absurd situation. At first, the five main characters are thrilled to find other people still moving about the sleeping city. Then they begin to realize the opportunities. Who will stop them from robbing banks, stealing fancy clothing or raiding fine restaurants? But this mischievous joy quickly turns into boredom and depression. (The arc reminds me of Groundhog Day.)

The characters are only mildly interested in the whys and hows of the frozen city, at least at first. Rather, they are like children with a new toy and no adult supervision. Paris is theirs for the taking and take they do. With even the watchman, ostensibly the voice of law and order, taking part in the criminal mayhem, it seems that society is just a thin veneer. (A very common theme in a world still recovering from the body blow of the First World War.)

While the cynicism is undeniable, so is Clair’s obvious affection for Paris. Even this drastically cut version allows the camera to linger on the city below. Clair may frame actors in the shots but we all know what his real focus is.

Clair later recalled that the film was shot on a shoestring and that even that meager budget was difficult to come by. Necessity truly is the mother of invention as some of the funniest gags and most striking scenes were also the cheapest. As the quintet begins to grow bored with their sleeping Paris, ennui sets in. The men gamble with real money, not caring much whether they win or lose, even cutting paper airplanes out of the cash. The lone lady drops the pearls of her necklace from the top of the Eiffel Tower one by one. These actions are perhaps the most imaginative but the stunning view of the city below lends poignancy to the scenes. (There are some stunning shots but the film has a choppy, jerking feel to it. Whether this was an aspect of the original cut or the result of Clair’s later tinkering, I cannot say without viewing the original.)

Anyway, the four men soon discover that there is only one thing that can interest them: the wooing of the lady airplane passenger. They follow her around the tower, much to her annoyance, and it seems that things will turn into a jealous brawl when they hear a voice on the radio. Someone calling for help, asking anyone who can hear to come to a certain house and look for a handkerchief in the window.

Our heroes discover a young lady (Myla Seller), the niece of an eccentric scientist (Charles Martinelli). He does not seem to comprehend all the trouble he has cause, it never occurred to him to simply turn off the ray. The ray is soon disabled and everyone is thrilled at first but then they learn that they must readjust themselves to an awakened Paris. Will they return to their lives as normal citizens? (It goes about as well as you might expect.)

This film is quite cute and accomplishes everything it promises, though I think that the ending drags a bit. One too many endings perhaps? An attempt to stuff too many gags and a love story into the final few minutes of the picture? In any case, the rest of the film is so quirky and fun that I can forgive a few pacing issues in the conclusion. It’s not profound, the pacing is curious and only some of the gags land. Still, I can think of worse ways of spending half an hour.

The Crazy Ray is rough—it feels like a first-time production—but it’s charm is undeniable. At only 34 minutes, it makes a pleasing appetizer before viewing something longer and heavier. Here’s hoping we will get to see the complete version soon.