The Wonderful Wizard of Oz (1910) A Silent Film Review

L Frank Baum’s American fairy tale hit the silver screens for the first time with this one-reel motion picture. Dorothy is whisked off to the land of Oz accompanied by a mule and a cow and Toto, who is transformed into a hellbeast… Yeah, it’s a pretty loose adaptation.

Lions and tigers and bears and cows and mules and camels…

When people talk about the silent version of The Wizard of Oz, they usually mean the disastrous 1925 Larry Semon vehicle. However, Semon was by no means the first person to make Oz films. Author L. Frank Baum, like so many creative people, was full of imagination and short on business acumen. One poor business decision resulted in the creation of the very first true Oz movie.

Baum himself would later make his own Oz films and what a spectacularly strange collection of motion pictures they turned out to be! I reviewed The Magic Cloak of Oz from 1914 and it was… different.

(By the way, I am heavily indebted to Oz Before the Rainbow by Mark Evan Swartz, which covers Oz adaptations on stage and screen before the famous 1939 MGM version. Excellent reading.)

Before we start the review of the 1910 film version of Oz, we must cover a little matter of firsts. The Wonderful Wizard of Oz is often called the first Oz movie, which is true even though there was another motion picture Oz released in 1908. As part of a campaign to sell copies of his novels, L. Frank Baum created a multimedia presentation entitled The Fairylogue and Radio-Plays, which included narration from the author, colored slides and brief snippets of performers acting out scenes from the Oz books. These motion pictures were hand-colored to further add to the lavish look of the presentation.

This was not a complete motion picture meant to stand on its own without accompanying slides and narration and, alas, all known footage seems to be lost. As a result, I am quite comfortable crowning the 1910 film as the very first Oz movie. 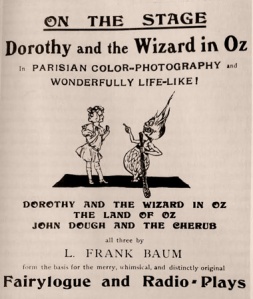 (The young lady who played Dorothy in the 1908 production—for the handsome sum of $5 per day— was Romola Remus, a Chicago girl whose father was George Remus, known as the King of the Bootleggers and possible inspiration for the character of Jay Gatsby. Now excuse me. This was a twentieth century pop culture overload and I need time to process.)

The Fairylogue and Radio-Plays was a lovely production by all accounts but it was not cheap and it proved impossible to sell enough tickets to cover expenses. In sort, it bombed spectacularly. Baum had borrowed money from the Selig Polyscope Company, a large Chicago-based studio, and used the film rights to some of his Oz books to ease his debt. And that is where The Wonderful Wizard of Oz comes into the story.

Now before we go on, I must say that the only thing that we really know about the background of the 1910 Selig film is that we don’t know very much. (We do know, though, that the film was NOT a recut of the Fairylogue footage, something that was rumored to be the case before The Wonderful Wizard of Oz was rediscovered in the 1980s.)

The picture was filmed in Selig’s brand-spankin’ new studio in Edendale, California unless it wasn’t. It was filmed in Chicago… maybe. Consensus seems to lean toward Edendale but it is by no means a sealed deal. Certainly, Hobart Bosworth—listed as a member of the cast but his exact role not named—was unlikely to have left California. A popular stage star, he moved west just a few years before for his health and loudly praised the superiority of California air.

Bebe Daniel, who had just turned nine, was also on the cast list and likely played the role of Dorothy. (The existing list apparently only named personnel and not the roles they played. However, the Dorothy role was really the only one that was clearly played by a child.) This means that Daniels can lay claim to the title of the first true onscreen Dorothy Gale.

(Romola Remus, you will recall, was part of a multimedia presentation and was not expected to carry a full Oz film. You might compare this to the James Bond franchise: Barry Nelson was technically the first actor to play Bond as he starred in a 1954 television version of Casino Royale but no one except lovers of gotcha trivia would seriously argue that he be placed ahead of Sean Connery, the first movie Bond. Not even Nelson himself, in fact.)

The Wonderful Wizard of Oz opens in Kansas, where Dorothy is hanging out with her pals, Toto the dog, a cow and a mule. They discover a sentient scarecrow and help him down from the pole upon which he was hanging. The quintet then realize a tornado is coming and take refuge in a haystack, which proves to be ill-advised as they are blown away to Oz, hay and all.

We are then shown the throne room of the Wizard of Oz but it’s really more of an excuse to include long shots of young ladies in pageboy tights. The wicked witch Momba is threatening the Wizard and no one knows what to do, help, help. The witch has Oz under her power (never you mind how) and so he issues a proclamation stating that he will give his crown to anyone who will rescue him and allow him to return to Omaha.

Meanwhile, Dorothy and Toto are walking though the woods when Glinda the Good Witch turns the dog into a giant whatsit—ostensibly as a protector for Dorothy. I think Glinda was just bored. The Cowardly Lion shows up and is immediately attacked by Toto. The Lion—understandably terrified to the mutant dog—surrenders and everyone becomes friends. The Scarecrow reads Oz’s proclamation and they all set out to… do something. The movie is not clear on this point.

On the way to somewhere, Dorothy and company find and oil the Tin Man and the cast is complete. Yay! This occurs just in time for everyone to be captured by Momba, who then makes the fatal error of giving Dorothy a bucket of water. I mean, if you took someone prisoner, would you issue them a bucket of battery acid to slosh around nearby? Didn’t think so. With the witch well and truly melted, Dorothy and the others journey to the Emerald City to claim the crown.

The Wizard is overjoyed and hands his crown to… the Scarecrow? But Dorothy did all the work! Sigh. Anyway, the Wizard makes a hot air balloon using union labor (?) and prepares to depart. One wonders why he could not do this before. Momba was not watching him every second. Why not just make the balloon in secret and fly away? So many questions… (Yes, I am sure all these questions are answered in the books but it has been forever since I have read any of them and, besides, this movie is supposed to stand on its own. If your answer to a flaw in storytelling is “Oh, read the novelization” or, worse, “It’s all explained in the expanded universe” then you are missing the point of making a movie in the first place.)

The Wizard flies away in his balloon, a camel wanders into the shot and the Scarecrow and the Tin Man dance. The end.

So, all in all, reasonably close to the original novel. The Wonderful Wizard of Oz makes use of the painted backdrops that were still popular in 1910 and its costumes draw heavily from the illustrations of the original book, as well as the successful stage production. In short, the film looks very much of its time and has the flavor of a filmed play. However, it is not without its charms.

For a start, the cast really threw themselves into their parts, dancing and leaping across the sets. (As there seems to be no listing for who played which role and since almost everyone wears either a mask or heavy makeup, it’s futile to argue about it.)

While the storytelling is choppy and episodic, it does manage to tell the basic story of Dorothy in the land of Oz. Some of the additions are odd (Why the mule and cow? Why turn Toto into a hellbeast?) but after surviving the terrible 1925 version, one becomes less picky. Oddly enough, the 1939 MGM musical version does the best job of following the original book.

This original Oz film is more valuable for its historic nature than it is for its artistry. It’s not bad, just pretty much par for the fairy tale film course in 1910. Rival studio Vitagraph showed far more whimsy and showmanship when they ventured into fairy tales but the Selig production is not bad. And, at only 10 minutes, it’s definitely worth your time.

The best version currently in print is included as an extra on the three-disc release of the 1939 MGM musical. You also get the 1925 Larry Semon film (ewww) and two of the 1914 Oz films produced by L. Frank Baum. A great bargain.