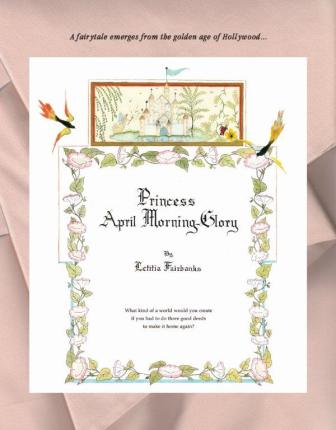 Sometimes I run across things that make the little 5-year old me inside leap for joy. Princess April Morning-Glory is one of them.

I know what you are thinking. “Why is she reviewing a kids book on her silent movie site?” Well, Princess April Morning-Glory has an impeccable silent movie pedigree!

It was written and illustrated by Letitia Fairbanks, the niece of Douglas Fairbanks and Mary Pickford. She started work on it as a tribute to her uncle following his death in 1939 and completed it in 1941. That in itself would be enough to draw my attention but there are even more exciting secrets contained inside. You see, Letitia drew on her Hollywood connections as she created her story and the book is a fascinating who’s who of Movieland, circa 1930-40!

That guy, is that John Barrymore? Did I just spot Greta Garbo? Wasn’t that Irving Thalberg? Letitia Fairbanks did not leave notes so (with a few exceptions) there are no right or wrong answers. This means that Princess April Morning-Glory is a magical puzzlebook for fans of classic Hollywood.

Availability:Released in print and as an ebook.

One thing that has always annoyed me about works aimed at children in general (and girls in particular) is that independence is often equated with willingness to engage in violence. There are damsels and there are warrior princesses and there is not much in between.

I’m not saying that women are forbidden from being warriors but surely there must be a way to portray an empowered female character without asking her to split heads.

When I was young, one of my favorite books was The Paper Bag Princess by Robert Munsch. The heroine sets off to rescue her prince from a dragon using her smarts. She then discovers that maybe marriage to a handsome prince is not the answer. 5-year old me loved the illustrations and the dragon, yes, but I also loved the fact that the heroine was intelligent and self-reliant. This was especially wonderful since I grew up in the golden age of the Smurfette Principle.

As you can see, the plot is 100% pure Hero’s Journey, which means that the story is on solid ground. Letitia Fairbanks was also very clever about both fulfilling and subverting the audience’s expectations. There is no romance for April Morning-Glory herself but there is a fairy tale love story concerning the Lonely Princess in the tower and Prince Chivalry. However, rather than the prince rescuing the princess solo, April Morning-Glory slips a Mickey to the entire palace allowing the prince to make off with his beloved.

April Morning-Glory is also allowed to rescue herself at the grand climax. Her father provides her with his wand, which she uses to defeat Misery (non-violently!) and return home again. One might argue that the help from her father weakens April as a character. However, I would point out that even though her father provided her the tool for her escape, she had to make use of it herself.

So, as you can see, the story contains an extremely positive message and its moral (do three good deeds) is certainly one that all children, boys and girls, can learn from. And it manages all of this without being preachy or dull! Hats off to Letitia Fairbanks!

Any picture book is going to be judged by its illustrations.

There is no denying that Princess April Morning-Glory is stunning. Each page has lavish paintings and whimsical illuminations. The entire book features calligraphy that is beautiful and quite readable.

As I said before, the book is soaked in the spirit of classic Hollywood. The influence of Gulliver’s Travels is quite clear, as is the work  illustrator Jessie Willcox Smith. However, Letitia Fairbanks has her own unique illustration style. Her images are delicate and airy, which contrasts beautifully with the dark, ornate calligraphy.

Adding to the personal nature of the book, Letitia used herself as a model for some of the pictures. Kelley Smoot Garrett of Sandramantos Publishing graciously shared her reminisces with me (Letitia Fairbanks was her step-mother and the publication of the book is very much a labor of love) as well as a wonderful comparison shot showing the resemblance between Letitia and the Lonely Princess. In fact, the Lonely Princess (along with Prince Chivalry, who was based on Douglas Fairbanks Jr.) is one of the few characters whose identity was confirmed by Letitia herself.

As a young woman, Letitia Fairbanks was pressured to marry (since the view of the time was that women should settle down into housewifery– no career for you, young lady!) but she wanted someone like her refined cousin. However, men like Doug Jr. do not grow on trees (more’s the pity). The Lonely Princess symbolizes her feelings of longing at the time.

The costuming is based heavily on the 1922 Douglas Fairbanks version of Robin Hood ratherthan the later version. Letitia would have been 9 years old when her uncle’s blockbuster film was released and she would be watching it with even more enthusiasm than the average movie-goer. Who wouldn’t want to have Robin Hood as an uncle? It clearly made quite an impression! If you have not seen the 1922 version, Enid Bennett was a gorgeous Maid Marian. To make for a more epic plot, the film introduced elements borrowed from Sir Walter Scott’s Ivanhoe (most of the knight and king stuff), some of which have been carried to nearly every version since!

Back to the technical aspects! Fairbanks had never published a picture book before and she created her art book-style, that is, back-to-back, which led to bleed-through. For publication, the artwork was painstakingly restored, pixel-by-pixel in some cases. Further, the color printing technology of the time (early 1940’s) made the cost of printing prohibitive.

As a result, the publication of Princess April Morning-Glory is the first time that this unique book has been widely available as its author intended.

If you are interested in learning more about the art of Princess April Morning-Glory, be sure to check the book’s blog. The tale is being annotated page by page with details on the possible influences for the illustrations. The blog also covers the efforts Letitia Fairbanks made to remain her own woman in a time when that was frowned upon.

*** Disclosure of Material Connection: I received a copy of this book for free for the purpose of reviewing it on my blog. I was not required to write a positive review. The opinions I have expressed are my own. I am disclosing this in accordance with the Federal Trade Commission’s 16 CFR, Part 255: “Guides Concerning the Use of Endorsements and Testimonials in Advertising.”