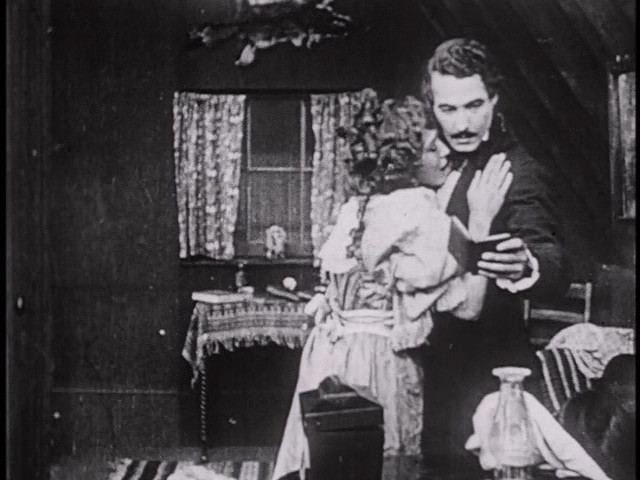 D.W. Griffith tackled the Gold Rush and experimented with close-ups in this tidy little drama. Mary Pickford is a shady lady living in a gold rush town. When she gets dumped by her duded-up suitor, Henry B. Walthall, she seeks comfort in the burly arms of Lionel Barrymore. But who will get the girl?

Before going on, I have a little confession to make. After enduring Birth of a Nation and Intolerance, I was ready to write off D.W. Griffith as “for historical purposes only” and move on to more enjoyable fare. However, I decided to give Griffith one last chance and watch the films that had made him popular in the first place: His one and two-reel (meaning about 12-30 minutes long) Biograph productions. He made over 400 of them between 1908 and 1913 and they were widely considered to be the best in the land.

Reader, I loved them. This was the cinematic magic I had been looking for! The stories seemed simple but had hidden depths. The pace was snappy and the acting astonishing. Griffith was writing the textbook for narrative film-making and the thrill of discovery crackles onscreen. While Griffith did not actually invent many of the techniques he used, he honed them and used them with a flair that had never been seen before.

Part of what makes the Biograph films so enjoyable is the massive pool of actors that Griffith was able to draw from. More casual film fans still remember names like Blanche Sweet, Lillian and Dorothy Gish, Mae Marsh, Henry B. Walthall, Harry Carey, Lionel Barrymore, Robert Harron… But there were also talented performers who have since been forgotten by all but historians and film buffs: Elmer Booth, Arthur V. Johnson, Dorothy Bernard, Claire McDowell… And each of these actors could be called on to be a hero one week, a villain the next, an extra the week after that.

Friends comes near the end of his Griffith’s career of, as he put it, making sausages. It starred Mary Pickford (only twenty at the time), who was also on the brink feature film super-stardom. Pickford would leave Biograph the following year for the second and last time.

Mary Pickford plays Dora, one of the few women living in the mining town who, it is hinted, is no better than she ought to be. She is mad for Dandy Jack (Henry B. Walthall), a dapper miner. However, Jack goes where the gold is and the gold is up north. Finding herself dumped, Dora descends into a dark mood.

Jack is pals with a couple of miners who are panning out by the river, Bob Kyne (Harry Carey) and Grizzley Fallon (Lionel Barrymore). Fallon heads into town for a drink and some socializing. Dora, meanwhile, is still moping over her lost love. The other men in town are more than willing to fill Dandy Jack’s shoes but she will have none of them. Fallon falls head over heels for Dora and his sincere courting eventually wins her over and they become engaged.

It looks like a happy ending but then Dandy Jack returns. Dora is at first cold but finally confesses that she still loves him. Jack spots Fallon’s photograph on Dora’s dressing table (it has replaced his own picture) and Dora tells him that he is her fiance. Rather than hurt his friend, Jack dumps Dora yet again. She is left alone to contemplate.

Much has been made of the fact that Griffith reused the same footage for the opening scene and the closing scene of this film: Dora sits at her vanity, dressed to go out but staring ahead pensively. Griffith loved symmetry in composition, scenario and structure. The double use of the scene makes sense when you take a look at the story structure of the film:

The performances are, as usual, spot on. Mary Pickford (much more womanly than she would be allowed to be later in her career) is excellent as a lonely person recovering from a breakup. Unlike other Biograph actresses, Pickford refused to indulge Mr. Griffith’s, er, eccentric view of femininity. As she put it, “I would not run around like a goose with its head off, crying ‘oooooh… the little birds! Ooooh… look! A little bunny!'” Instead, she shows Dora’s sadness by slowing down her movements, every step languid. Even walking across the room takes effort. Fallon coaxes her out of her funk and she slowly returns to a more natural way of moving but it is only when Dandy Jack returns that she becomes fully alive again.

Lionel Barrymore, who had been knocking about motion pictures for a few years, is likable as Dora’s second choice. It’s fun to see him as a romantic character. In a few years he would be relegated to playing fathers, uncles, eccentrics and villains. (Though he played those very, very well.) Thirty-three years old when Friends was shot, Barrymore’s burly frame and scruffy appearance make him look older.

Modern audiences may find his eyes to be a bit… wild. There is a reason for this. Lionel Barrymore had blue eyes and blue eyes sometimes did not register on the movie film used in 1912 (and up until the early twenties). Other actors who had trouble with dead eyes included Conrad Veidt, Mary Miles Minter and Stan Laurel. The deranged appearance helped Veidt (who was usually cast in evil roles anyway) but was very troublesome for Minter and Laurel.

Henry B. Walthall does good work as Dandy Jack but, let’s face it, this was the kind of role he could do in his sleep. However, his character is a bit troubling. It’s not his fault, it just reflects the film-making of the period (and even today to some extent).

Dora is not allowed to have a say in her own future. Jack dumps her, comes back over her objections and then dumps her again. It is clear from his body language at the beginning of the film (he ignores her pleas to come up to her and continues to whoop it up at the bar) that he does not respect her. Later, when he returns for her, he enters her room  and refuses to leave when he is told to. His final break-up with her is based completely on his friendship with Fallon, she is not considered.

In short, Dora is treated like she is the last french fry at lunch. “Oh, you eat it.” “No, I couldn’t possibly, you eat it.”

This treatment of Dora as an object that can be passed between friends is, sadly, a reflection of attitudes and film-making of the time. It is still common for female characters to be treated as a living football to be fought over and negotiated for.  I should emphasize that Griffith did often include strong female characters (women in danger are not necessarily damsels in distress), which makes this particular story all the more disappointing.

So, in spite of good direction and excellent performances, Friends cannot be called one of the best of Griffith’s Biograph period. The scenario (penned by Griffith) just comes up short.

For another take on this film, check out 11 East 14th Street’s fabulous post.

Where can I see it?:

Friends has been released on DVD in the set Biograph Shorts as part of Kino’s Griffith Masterworks series with music by Robert Israel.