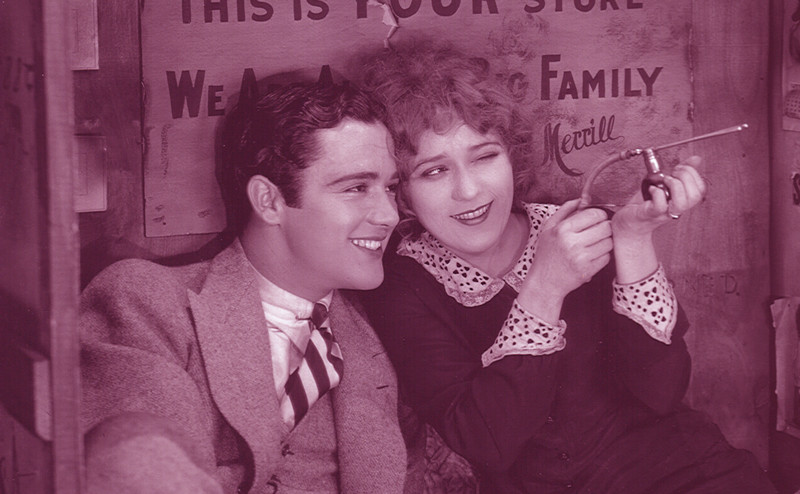 When an innocent romance springs up between a lowly shop girl and an incognito chain-store heir, can it survive interfering parents, a hidden identity, and a secret engagement? This was Mary Pickford’s final silent film and she works opposite her future husband, Buddy Rogers.

Mary Pickford spent much of the twenties trying to escape her greatest success. Her audience loved to see her playing little girls with golden curls but Pickford (as was understandable for a woman in her mid-thirties) wanted to play grownups. However, box office receipts did not lie. Grownup Mary? They liked her well enough. Child Mary? That was who made the cash.

It’s worth remembering that, while Mary Pickford is best known for her child roles, what started her down that path was the 1918 film, The Poor Little Rich Girl. Prior to that, she had played heroines and romantic leads in every flavor, from feisty to dainty. In this, her final silent film, Pickford chose to play an adult. This is a refreshing return to the kind of romantic role that had originally made her a star. It also results in a very accessible romantic comedy.

Pickford plays Maggie Johnson, a lively dime store shop girl who falls for Joe Grant (Buddy Rogers), a newly-hired stock clerk. And who could blame her? Rogers is adorable!

But he has a secret. You see, Joe is in fact the son of the owner of the dime store chain, Robert Merrill (Hobart Bosworth, always a welcome presence). He took the job in the stock room in order to prove that he did not need family connections to win a promotion. Maggie is a great help to him in his goal, she happily shows him the dime store ropes. Joe is falling for Maggie. And this in spite of her eccentric (and needy!) family.

The problem is that Joe is already engaged to Millicent Rogers (Avonne Taylor), a girl from his own social circle. Joe’s mother is eager to announce the engagement. What will Maggie do when she discovers Joe’s real identity? And how can Joe reconcile his newfound feeling for Maggie with his engagement to Millicent? And what will his family say? I think we can all guess how this is going to turn out but getting there is all the fun.

The love scenes between Pickford and Rogers are natural and sweet. In one particularly charming sequence, Joe takes Mary to his grand home as a good-natured joke. He announces that they should be allowed to eat at their boss’s home and then walks in like he owns the place. Well, he does own the place but Maggie doesn’t know that. Then Maggie and Joe have fun playing Mr. and Mrs. Merrill complete with a grand dinner. Maggie uses all the wrong forks, eats the ice out of her cocktail glass, and is generally adorable in her unsophisticated ways.

Later, when Maggie is struck with a bad case of Noble Idiocy. She tells Joe that she was just playing with him and that she is really a red hot jazz mama. Yes, this is exactly as funny as it sounds. Of course, it’s not giving much away to assure readers that all ends with romance and reconciliation.

All in all, My Best Girl is a breezy romantic comedy that makes the most of its talented leads. Well worth seeing.

My Best Girl was released on DVD by Milestone.