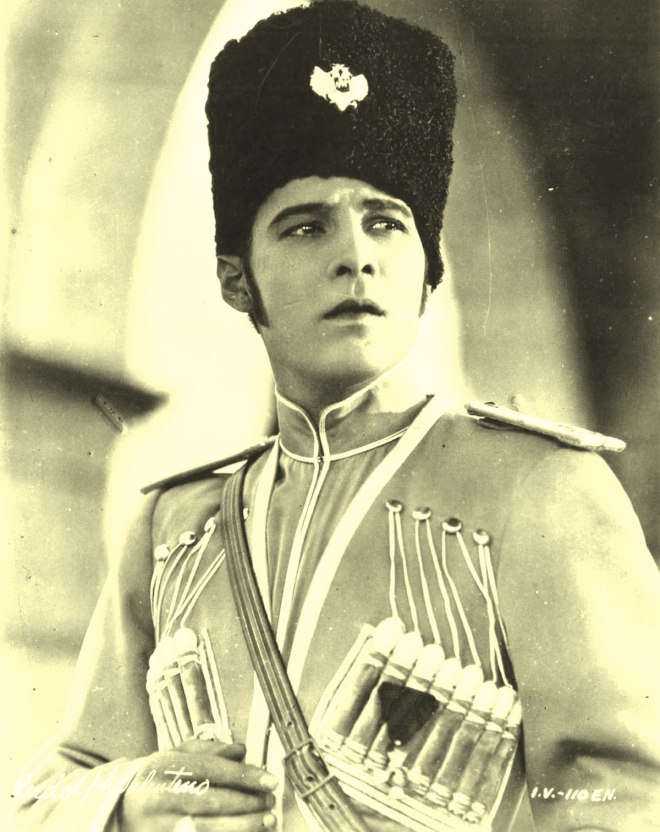 Rudolph Valentino finally came up with the perfect movie formula in this 1925 hit: Action Lover. Valentino is a fun-loving Cossack who turns down the advances of the Czarina. Forced on the run, he takes the opportunity to seek revenge against his father’s enemy. And wouldntcha know it, that enemy just happens to have a beautiful daughter.

Come 1925, Rudolph Valentino was in a pickle. His career was not doing as well as he had hoped. After a hiatus from Hollywood and a change of studios, he found himself still looking for the perfect movie formula. Women still went wild for his Latin Lover shtick but he had a hard time drawing male moviegoers.

The Eagle provided the solution. Armed with enough Fairbanksian action to satisfy even the most macho viewer, it also packed in some red hot romance to please Valentino’s fan base. Add a liberal dash of humor and what resulted was a much-needed hit. It also served as a prototype of sorts for The Son of the Sheik, Valentino’s final blockbuster.

Set in Russia during the reign of Catherine the Great,The Eagle opens with Lieutenant Vladimir Doubrovsky (Valentino, looking smashing in his Cossack gear) saving a runaway carriage. The carriage contains the beautiful Mascha Troekouroff (Vilma Banky) and she is charmed by her handsome savior.

She’s not the only one. Czarina Catherine (Louise Dresser), a notorious man-eater, spots Vladimir and decides to add him to her list of conquests. What follows is a hilarious reversal of the usual Valentino film. Catherine summons Vladimir for a private meeting and proceeds to pitch woo most aggressively. Valentino is horrified at being treated like an object rather than a soldier.

Anyway, against the advice of his friend, he walks out on the czarina. Hell hath no fury and Catherine is bent on taking Vladimir’s head for the insult. But Vladimir has bigger problems than the spurned czarina. His father is dying. On his death bed, he tells Vladimir that their lands have been seized by Kyrilla Troekouroff (James Marcus). Surname sound familiar? You guessed it! He’s Mascha’s father.

Vladimir vows revenge and taking on the persona of the masked Black Eagle, he goes about striking at Kyrilla in the accepted Robin Hood/Zorro manner. But Mascha is truly the main challenge. Vladimir is in love. Will he take his revenge or give it up for the girl? It’s Valentino. What do you think?

The Eagle is one of Valentino’s very best films. In Vilma Banky he has a leading lady with enough pluck and charisma to stand up to him. Further, Miss Banky was an accomplished actress and she brings out the best in her co-star. Clarence Brown provides confident direction. The action scenes are exciting, the love scenes are sexy and the flirting scenes are adorable.

It is Louise Dresser, however, who deserved credit for putting the movie over.

Catherine the Great is one of those historical figures who is actually more interesting than any of her fictional portrayals. Her romantic exploits are legendary and she had a particular taste for soldiers. Dresser captures Catherine’s aggressive flirtatiousness in a way that is both funny and empowered. It is quite amusing to see Valentino’s character squirm when faced with the same behavior that he displayed in films such as The Sheik. Dresser would return to Russia in the Dietrich/von Sternberg film The Scarlet Empress, in which she played Empress Elizabeth to Marlene Dietrich’s Catherine. And, yes, Dresser stole the show there as well.

With such excellent talent in front of the camera and behind it, Valentino shines. Too often obscured by bad direction, shoddy production values and silly scripts, The Eagle’s breezy pace and fun story allow him to enjoy himself. As a result, the audience enjoys him as well. From his action scenes to his Scarlet Pimpernel-esque foppery, Valentino displays the charisma and sense of humor that would serve him so well inSon of the Sheik.

The Eagle is highly recommended for people who think they don’t like Valentino. It just might  change their minds.

The Eagle is available on DVD and Bluray.

Sometimes movies can improve when paired with one another. In this case,  we have The Eagle, the Valentino classic and The Scarlet Empress (1934), a collaboration of Dietrich and von Sternberg. Both films concern the world of Catherine the Great. In The Eagle, she is a supporting player. In The Scarlet Empress, she is the main event.

Both films take a complicated period of Russian history and turn out splendid crowd-pleasers. The Eagle accomplishes this through romance and adventure. The Scarlet Empress succeeds with intrigue and double entendre.

The Scarlet Empress succeeds on many levels. Any film directed by Josef von Sternberg is sure to be beautifully shot and he rarely had more interesting subjects to film. The set design and costumes are delightfully grotesque, almost to the point of self-parody.

The acting is excellent across the board. Marlene Dietrich has great fun playing her innocent-turned-tramp role. Louise Dresser consumes large helpings of scenery as Empress Elizabeth. Sam Jaffe, a personal favorite of mine, smirks and lurks through the Kremlin with aplomb.

The stylized acting fully compliments both the look and sound of the picture. I also liked the effect of having the Russian characters speak with broad American accents while the German characters spoke with their (usually native) German accents. It gave the illusion of two separate countries without subtitles or overdone Russian accents.

The result is a somewhat sick, rather wacky film that was probably ahead of its time in 1934. But I have always been a sucker for sick and wacky and, as a result, this is my favorite Dietrich/Sternberg collaboration. The Eagle, on the other hand, is not attempting anything as artistic. It is just out to give its audience a good time and it thoroughly succeeds.

It’s worth noting that while The Eagle was a hit, The Scarlet Empress tanked at the box office. It has since found a following. Both films would make a great movie night double feature. Their different takes on the same period of Russian history would make them a particularly good choice for history geeks. And the presence of the talented Louise Dresser as two different lusty czarinas makes the double bill a fun one for film buffs. As both Catherine and Elizabeth, she is a real scene-stealer.

For another classic take on young Catherine, try Alexander Korda’s The Rise of Catherine the Great (1934). Elisabeth Bergner is a rather too nice Catherine but Flora Robson is delicious as Empress Elizabeth and Douglas Fairbanks Jr. gives what is possibly his best performance as the mad Grand Duke Peter. He flirts, charms, threatens, twitches and generally steals the show.

It lacks the boldly imaginative production design of the von Sternberg film but it is probably more realistic to what the Russian court probably looked like when young Catherine arrived. That being said, I must admit that I prefer the gothic barbarism of the American production.

As stated before, Bergner’s Catherine is a very nice woman. Too nice, in fact, for us to believe her actually capable of seizing power. Fairbanks, though, is such a marvelous villain that (much though I like Sam Jaffe) I wish he had acted opposite Marlene Dietrich in her version. What a wonderful thing that would have been!

In general, the film is mannerly and veddy veddy British. I think a wilder take on the tale is required. Worth seeing but not as good as either of the films reviewed above.