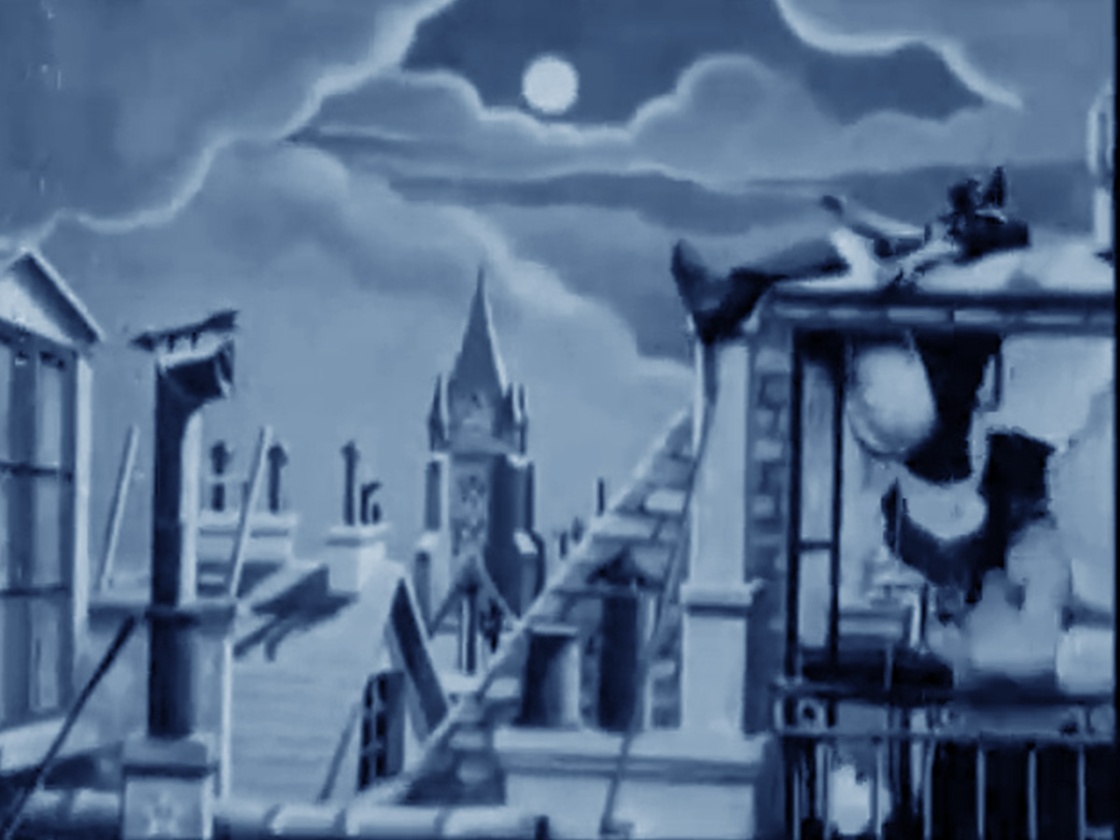 An early example of a staged comedy built around sets designed for the purpose, this crime caper from Georges Méliès shows a pair of burglars getting the best of a bumbling cop, a popular humor trope.

Before the Keystone Cops…

Georges Méliès had been a busy man since his motion picture debut in 1896. He had recreated his own popular magic act, he was dabbling in horror, actualities and he would soon fully embrace the reenacting (“faking” is too strong a word) of real-world events.

Comedy had been present in the movies since the very beginning—see The Sprinkler Sprinkled from 1895—and Méliès often incorporated elements of humor into his other films but On the Roofs was not a trick film with comedy but a pure comedic production with the humor enhanced with the sets built for the picture.

The film, which runs for about a minute, has a simple but clear premise: a pair of burglars invade a rooftop apartment and toss the lady of the house off the balcony. A policeman (looks like Méliès himself played the part) sees what is afoot and tries to ambush the burglars but ends up falling through, posterior-first. The burglars tie the strap of his belt to the balcony railing and make their escape, one of the criminals pausing to steal the unfortunate policeman’s boots.

On the Roofs is framed more tightly than many of Méliès’ more famous later films, likely because the set itself was physically smaller. It’s a simple affair with a city nighttime skyline backdrop and the balcony/apartment area. The victim of the crime is dispensed with quickly and comically so that the film can focus on the main event: the silly policeman who falls into his own trap.

This picture also shows how far film comedy had come even in the brief period between The Sprinkler Sprinkled in 1895 and On the Roofs in 1897. While neither film contains any edits for narrative purposes, On the Roofs has a faster pace, fitting multiple gags into its brief runtime. Now, quantity does not always equal quality but the timing and pacing of On the Roofs are likewise superior. Filmmakers were learning their craft and improving it at lightning speed.

The “you gotta hand it to them” approach to criminal activity can be seen in the early productions of most major filmmaking countries, On the Roofs is just one of the earliest examples. Edwin S. Porter’s The Great Train Robbery (1903) and its subsequent spoof, The Little Train Robbery (1905), reflected his boyhood admiration of the James gang. R.W. Paul’s The “?” Motorist (1906) features a couple who run down a traffic cop in their car and escape into outer space. Lubin’s The Bold Bank Robbery (1904) follows the exploits of a criminal gang with little to no condemnation. In Denmark, The Anarchist’s Mother-in-Law (1906) ends with the title character being blown to smithereens by her exasperated son-in-law.

This was not unique to cinema. After all, Britain had Raffles, a gentleman crook, and France had Arsène Lupin, a cunning thief. Print antiheroes soon found their way onto the screen as well, with criminal mastermind Fantômas becoming an icon of French cinema. (Obviously, the hero-criminal is far, far older than this but I am focusing on the character’s popularity just before and during the rise of projected cinema.)

Of course, there were white hat, black hat films as well. The early hit Rescued by Rover (1905) shows a nasty band of kidnappers being outthought and outmaneuvered by a genius collie. Burglar on the Roof (1897) shows the bad man of the title foiled by apartment building residents armed with brooms. There was room for both Robin Hood types and more nefarious villains foiled by lawmen and citizens. And collies.

Popular, criminal films may have been. But they were an early target for film censors, who worried that children would learn both criminal techniques and a contempt for authority from such pictures. The popularity of cheap movie houses (nickelodeons in the United States) brought rumbles of censorship to fruition with police enforcement and formal film boards cropping up in multiple cities in the mid-to-late-1900s. (Vigilante religious action against films has been recorded as far back as 1897 with Episcopalians trying to smash Coney Island Mutoscopes.)

Crime and violence were listed as primary concerns to the exclusion of sexual content at times. (This is an interesting fact for U.S. viewers as the modern ratings system is far more concerned about sex, swearing and smoking than, say, dismemberment.) The Hollywood production code, which was a direct descendent of these early censorship ideals, frowned on films allowing criminals to get away with their lawless acts, as well as showing these acts in detail.

As put in the 1927 version of the code, filmmakers were cautioned to be careful in portraying “Theft, robbery, safe-cracking, and dynamiting of trains, mines, buildings, et cetera (having in mind the effect which a too-detailed description of these may have upon the moron).”

Even films that portrayed the police as heroic were subject to bans. Chicago appointed a police lieutenant as the nickelodeon theater and dance hall censor and one of the forbidden films in 1907 was the Pathe production The Police Dogs, which, as the title suggests, was about heroic police dogs chasing down criminals. However, the ample display of crime was considered serious enough for the picture, along with thirteen others, to be banned from screening, lest it “lead some child or man with a weak mind into an evil path.” Same tune, different singer.

With that context in mind, films like On the Roofs can be seen as a silly version of the kind of film that would likely have invited a ban ten years later. It certainly mocked an authority figure, a particular source of censorship bodies put in place by authority figures. On the Roofs is also an important building block for the kind of comical cops and robbers films that would become iconic at Keystone and which is still popular to this day. The sets are simple compared to the kind of ornate production values we usually associate with Méliès but nothing is wasted and everything has a comedic purpose. It’s a tidy, well-planned comedy that packs multiple gags into its brief one-minute runtime.

Every surviving Méliès film tells us a bit more about the filmmaker and his times. This goofy little film is unusually enlightening.