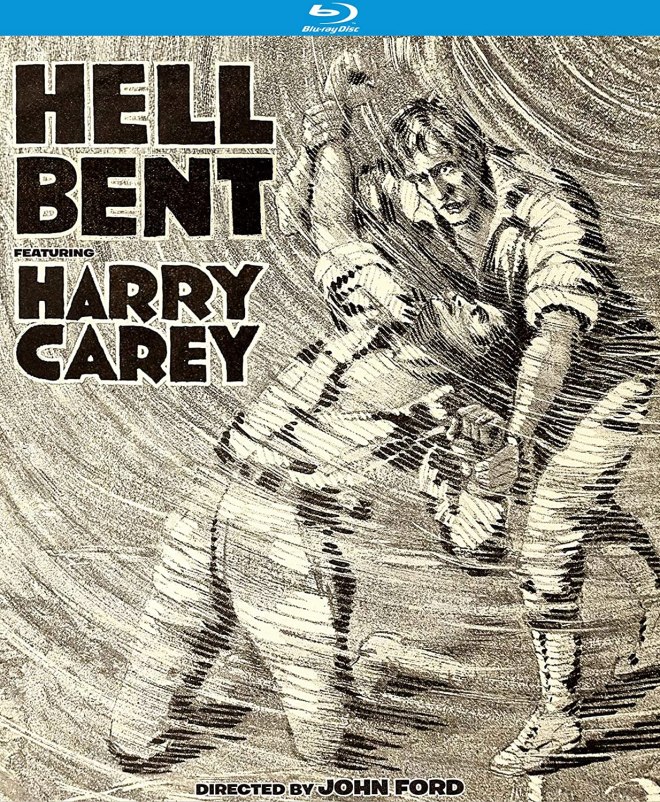 Unboxing the Silents by Movies SilentlyAugust 27, 2020

Part of Universal’s ongoing series of silent restorations, Hell Bent was one of many westerns director John Ford made with star Harry Carey. (And one of the few to survive intact.) This is its HD home video debut.

Thanks to Kino Lorber for providing a review copy.

This is a 4K restoration of the 1918 five-reel release. It can be ordered on DVD and Bluray here. (Disclosure: I receive a small commission from sales made through affiliate links.)

Unfortunately, my screencapping software has been misbehaving, so I won’t be able to offer any visual content this time but if you want to see the kind of restoration work that Universal has done for its silent series, check out my piece on 20,000 Leagues Under the Sea, which also made its HD debut.

I was very excited about this film being released because I am an enormous fan of Harry Carey. Usually, when Harry Carey is mentioned these days, it is framed through the “he inspired John Wayne!” thing but Carey was very much his own thing and deserves appreciation on his own terms. In the first place, he was a helluva actor and could glide between hard-bitten western antiheroes, likable goofballs and coldblooded villains with ease.

Unfortunately, Carey’s westerns are not so easy to find on home media. I love Straight Shooting (also released on HD by Kino and Universal), Soft Shoes and Beyond the Border and Carey was easily the best thing about The Trail of ’98. But I always want more, so Hell Bent was a welcome addition to my collection. This was kind of a big deal to me, in other words.

I mean, look at the ad, for heaven’s sake!

The restoration is as good as the others released by Universal. There are slight signs of the film’s age but the image is clear and crisp. The picture is presented in black and white but it was likely tinted upon its original release, as was the case with 90% of silent films at the time.

This is a real, quality restoration and the probably film looks better than it has in 100 years.

The score is a jazzy one written by Zachary Marsh and performed by a small ensemble.

If you are a John Ford fan, you probably already have this on your wish list. But if you are a Harry Carey fan or are looking to become one, this is an important release and recommended. It’s a darker film in Carey’s canon (more on the lines of a William S. Hart picture), which should make it pretty friendly to modern viewers who tend to like their westerns grim.

It’s a high quality release of an overlooked film starring one of my favorite performers, of course I am delighted! Very highly recommended.