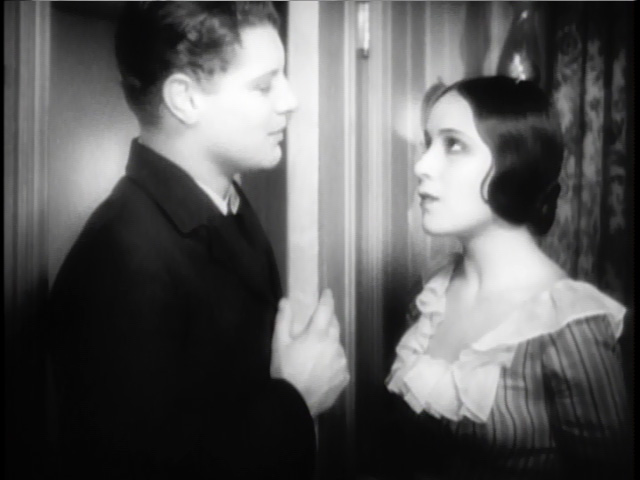 The chaotic year of 1928 was the last gasp of the silent epic. The film industry was converting to sound but many larger films were already in production during the talkie revolution. Soon the realism and grit of silent epics would be replaced by the glossy sheen of the studio-bound talkies but the silents reigned for one more glorious year.

There’s gold in them thar snowdrifts!

The most famous film about the Alaskan gold rush is Chaplin’s 1925 comedy entitled, oddly enough, The Gold Rush. The Trail of ’98 is a straightforward melodrama but I think it would have gotten more attention if it had been released just a year earlier. You see, those final silent epics tend to get lost in the historical shuffle of the talkie transition.

This Clarence Brown-directed film follows the adventures of a ship full of would-be prospectors, a motley crew of eccentrics and misfits. Oh, and the villainous miner who plans to make a bundle in claim-jumping.

It is 1898 and gold has been discovered in Alaska. The news spreads like crazy, first in San Francisco and then in the entire country. The film (rather confusingly) opts to introduce absolutely every character in the first few minutes. It’s very hard to keep track of everyone (especially since major characters are introduced alongside people we will never see again) so I will limit my list to the people who actually drive the plot.

Berna (Dolores del Rio) is a young woman who hopes to help open a restaurant for hungry prospectors.

Larry (Ralph Forbes) is a handsome stowaway who falls for Berna.

Jack Locasto (Harry Carey) is a sleazy profiteer who has already made a fortune and is going back for more. He also has his eye on Berna.

Lars Peterson (Karl Dane) is a tall, strong Swedish immigrant who hopes to make his fortune.

Samuel Foote (George Cooper) is also known as “the Worm.” He grifts and scams to get ahead.

Okay, that’s the main cast. There are a dozen or so other characters but these are the ones who matter.

The ship arrives in Alaska with Berna and Larry in love and Salvation Jim, Lars and Samuel forming a triple partnership. Locasto is biding his time, waiting for the right chance to make Berna his.

But before the gold fields is a journey across the chilly Alaskan wilderness. The trek across the frozen tundra and whitewater rapids are justly the most famous sequences in the film.

The snowy wasteland scenes have a distinctly Soviet flavor. The chorus in the background, the stark black and white, the ragged actors… Splice this into any Russian film of the 40’s-60’s and I doubt anyone would realize it was out of place. Since a picture is worth a thousand words…

The boat ride over the rapids was all too realistic. The cold weather iced up the safety harnesses that the stuntmen were to grab onto. With the icy loops all but impossible to use, four stuntmen were killed in the freezing river. Two of the bodies were never recovered. The boating scene is impossible to watch without a sad acknowledgement of its price in human life.

The party arrives at their destination, a small mining town, but they soon discover that the gold rush is not all it is cracked up to be. Most of the gold has already been found. There is no work and little food. Berna wants to leave but Larry has a bad case of gold fever. Finally, Berna thinks she has convinced Larry to take the next boat home with her. She is quite relieved as she is afraid of what Locasto will do to her if she stays.

Then word comes: Another gold strike in the mountains! Without a second thought to Berna’s safety, Larry heads out with Salvation Jim, Lars and Samuel. How will Berna hold up? And just what is Locasto up to?

The Trail of ’98 has its share of hits and misses. In general, the movie works better when the plot and the leads do not enter the equation. This is no slam at Dolores Del Rio, she goes above and beyond the call of duty (more on that later). It’s just that the lavish scenery has been used on a rather mundane romance.

I will say this, though: the climax delivers! (Spoilers, obviously.)

Up to this point, the film had been a pretty routine epic, albeit one with exquisite scenery. You know, Berna subjected to a Fate Worse Than Death, goes a little mad, Larry comes back, tries to win her over, Locasto chuckles… We have all see this before.

With Larry back in town and everything is out in the open, we get our usual bare-knuckle fight. Silent movies did so love their bare-knuckle fights and, unlike the battles of the talkies, they were allowed to include enough blood to make things very, very realistic. Harry Carey’s clever acting comes into play here. He carefully moves the furniture out of the way, buttons his coat… and then sucker punches Larry. The fight is on. Well done but pretty routine stuff until Locasto takes out a revolver and starts shooting Larry and Larry grabs a lamp and…

There’s no other way to put this. He sets Locasto on fire.

I actually gasped. And the flaming man effects were extremely well done. I hope the stuntman was okay because he did a heckuva job.

After that, requisite clutch, a few jokes from Salvation and Lars and The End.

My enormous love for Tully Marshall and Karl Dane make this film particularly fun. Here we have two of the best character actors of silent Hollywood doing what they do best. Tully is a fanatic bible-thumper with a underpinning of mischief. Dane plays his usual part: A good guy, dumb as a brick and strong as a bull. I just wish that the title writers had done without the “yumpin’ yimminy” dialect title cards. I offer apologies to my Scandinavian readers.

Harry Carey, who was a 19-year veteran of the movies in 1928, does good work as the villain of the piece. Locasto was written as your standard-issue lusty cad and bounder but Carey underplays, lending the part more dignity than it might otherwise have had.

Ralph Forbes, on the other hand, is out of his depth. He mugs shamelessly, his eyes bulging at every emotional revelation. The young actor is not helped by the fact that his character is pretty unlikable. Larry’s gold fever is what puts Berna in peril. What would he have done if the screenwriters had not decided to let him strike it rich? I will say this in the character’s favor, though: He knows he was wrong. Too many silent leading men become sanctimonious toward their fallen lovers (looking at you, Red Lily) but all Larry can do is beg for forgiveness.

Dolores Del Rio is beautiful, of course, but she also infuses her character with depth and dignity. Like Harry Carey and Ralph Forbes, she is saddled with a character straight out of a Victorian melodrama. Berna is poor but she has a queenly bearing. Her performance is subtle (considering the material), she mainly acts with her eyes. This subtly pays off when her character finally breaks down. The emotional torrent is all the more effective for all the restraint that was shown earlier.

Del Rio would, of course, transition to talkies easily. In 1938, she was named in the infamous Box Office Poison article. (Miss Del Rio was in good company, she shared the dubious distinction with Marlene Dietrich, Katharine Hepburn, James Cagney, Fred Astaire and Greta Garbo, among others.) She would later make a triumphant return to Mexican cinema, where her ageless beauty and sophisticated acting helped create some of the great classics of Mexico’s golden age.

The Trail of ’98 is enjoyable and epic but it falls short of being a masterpiece. While the scenery and camera work are top notch and there are several excellent performances, the film is undone by stock melodrama characters and situations. I still recommend it but wish the script had been a little more original.

The Trail of ’98 released on DVD-R by Warner Archive with its original synchronized score.