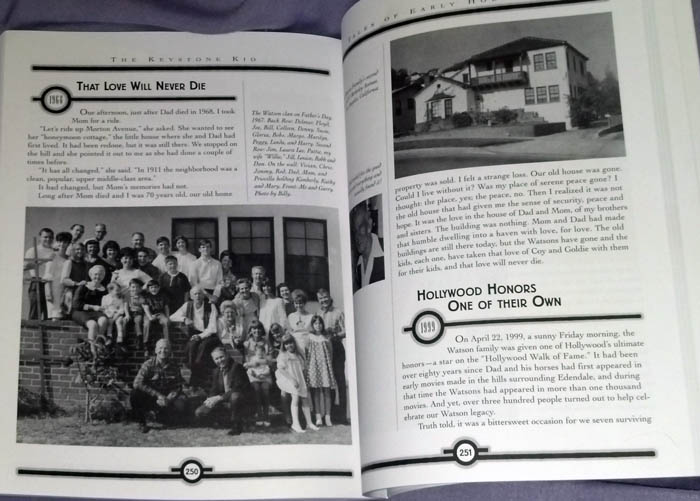 If you are a fan of classic films, you have probably seen one of the Watsons in a movie. Mother, father and all nine children were involved in the motion picture industry from the moment it came to California.

Coy Watson Jr. was the oldest of the Watson siblings and he made his acting debut in a Keystone comedy at the tender age of nine months! His siblings were (in birth order) Vivian, Gloria, Louise, Harry, Billy, Delmar, Garry and Bobs. Between them, the children appeared in over 1,000 films!

The Keystone Kid: Tales of Early Hollywood is the story of a family in Hollywood and a young actor who grew up along with the motion picture industry.

Availability: Out of print but widely available used.

Writing style: Watson is an enthusiastic narrator. He has a lot of great stories to tell and he conveys them with charm, optimism and wit. It is a refreshing to read a book about Hollywood that is not bitter, vengeful or catty. Watson was almost ninety when The Keystone Kid was published but he seems to have maintained his good humor and sense of wonder at the motion pictures.

Watson does not assume that his audience has any knowledge of the movie industry or silent films and he explains the terms that he uses. He also details how movies used to be made, giving special emphasis to the role of the director and the technicians. As a child actor who made the transition to sound, he explains very clearly why so many silent actors had trouble with the talkies: making movies in the cold silence of a sound studio was stressful, especially to children.

Highlights: The Watson family worked on so many films that movie anecdotes are inevitable. Here are a few charming ones:

Coy Jr. got a bit part in Lon Chaney’s The Hunchback of Notre Dame. During the filming of the pillory scene, one of the torch-bearing actors lost the drawstring to his tights, his pants dropped and he fell face first into the crowd. From then on, the joke on the set was to call out “Light your torches and pull up your tights!”

Coy Jr.’s father, Coy Watson Sr., was the one and only piano wire technician in Hollywood for a while. He was the man who helped Douglas Fairbanks ride a magic carpet in The Thief of Bagdad and slide down a ship’s sail in The Black Pirate. Fairbanks, ever the performer, took to performing gymnastic tricks on the wires between scenes. Coy Sr. loved working with Fairbanks but was terrified he would push his luck too far.

Coy Jr. and his friends playing “movie making” on Sennett’s Studio property. Mack Sennett himself happened upon the children and rather than scolding them, he offered to direct their “movie” for them! He gave them permission to play on the sets whenever they liked and bought them doughnuts when the game was over. Aww!

Pictures: The book is chock-full of family photos, behind-the-scenes shots, vintage ads and stills. The large format of the book means that there is lots of room for all the images. It is a truly beautiful book!

Goodness knows child stars could have it hard in early Hollywood. However, it is wonderful to read the adventures of the Watson family. The affection that they had for one another spills out of the book. The loving parents raised their beautiful children in a happy and healthy environment that just happened to include work in the motion pictures. This sunshiny book is an ideal read for when you are feeling down. I highly recommend it.