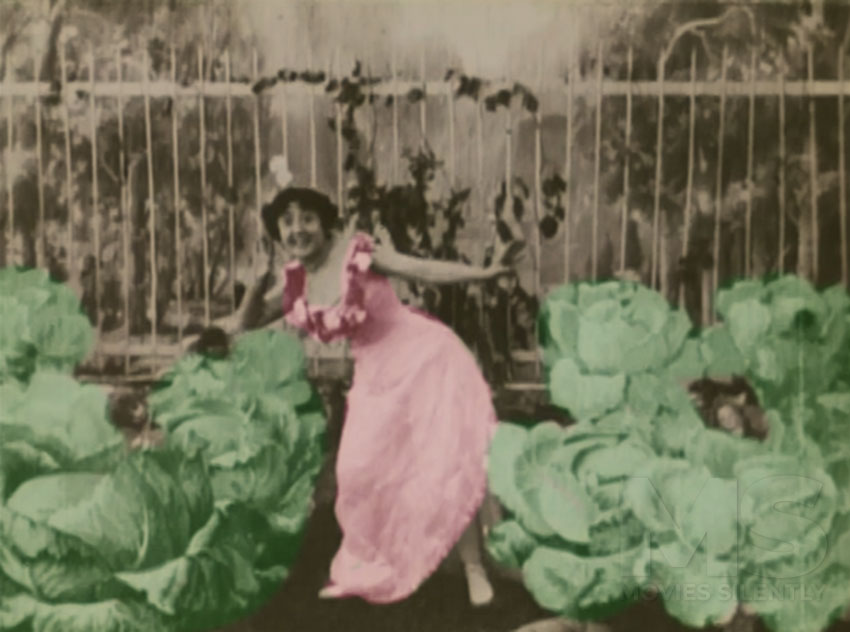 And then Mommy kissed Daddy, and the angel told the stork, and the stork flew down from heaven, and put the diamond in the cabbage patch, and the diamond turned into a baby!

The Birds and the Bees

Alice Guy was on a roll by 1900 and was directing a dizzying array of pictures, from trick films, to comedies, to dance pictures. The Cabbage Patch Fairy (La Fée aux Choux) was typical of the fantasy and trick films of the period: a charming vignette amongst painted background and props. But for a less than one minute runtime, this little picture has created its share of controversy.

As detailed in Pink-Slipped: What Happened to Women in the Silent Film Industries? by Jane M. Gaines, Guy stated that she made a movie with this title in 1896 but the extant picture we are discussing today has been pretty authoritatively dated as 1900. With silent film veterans, it is always best to enjoy their personalities and quietly take what they say with a grain of salt until more information is uncovered. That’s not what happened.

Intrepid internet sillies decided instead to date the 1900 film as 1896 and pass it off as an earlier work. This happens all the time with silent film research, due more to poor reading comprehension and wishful thinking than actual malice. I am still cleaning up the mess of people thinking Jetta Goudal’s first name is pronounced “Zah-hetta” because someone didn’t know that a ZH in an English-speaker pronunciation key means “soft J sound” and not Z-H. And don’t even talk to me about Florence La Badie.

To misquote F. Scott Fitzgerald, Guy’s memories were the spark that lit up Cabbage Patch Fairygate, the internet was the torch. What little things they are to have caused all that trouble.

That’s not to denigrate either Guy or the film, rather that it has become rather more of an issue than it really has any right to be. It’s a cute little production.

The Cabbage Patch Fairy is very much along the lines of Guy’s 1899 comedy Wonderful Absinthe. That is to say, it does not endeavor to explain but rather showcases something that would have been a common part of the audience’s life and illustrates it in a light, amusing manner. In the case of Wonderful Absinthe, it is the fact that absinthe tastes terrible unless it is diluted. Here, it is the common folktale that babies are found in cabbage patches or under cabbage leaves.

As stated before, this is an extremely short film and despite claims of it being the first narrative film (blame that 1896 film again) there is no story. An actress dressed in fairy garb and with impressive tight-lacing on her corset picks babies up from painted cabbages and sets them down again. There is some amusement to be had in that this reproduction fairy seems to have absolutely no idea of how to hold babies. And I say that as a complete baby non-expert.

I do, however, think it would be a stretch to claim that Guy was making any kind of statement on reproduction or anything like that. Film production was going at a furious pace at this point and digging into the folklore and pop culture of Belle Époque France was very much standard practice.

Me being me, I decided to take a peek and see if I could tease out just how ubiquitous this “found in a cabbage patch” saying was. It was certainly found in American parlance of the time. However, research into the topic is always a challenge because the notoriously hideous 80s fad dolls, the Cabbage Patch Kids, tend to suck all the air out of the room and flood any search results. (I was given one by a well-meaning relative. The doll was a boy with pale green overalls and the absolutely jaw-dropping name of “Ramsey Herman.” The dolls were issued with adoption certificates, you see.)

To further add to the problems, I have never heard the phrase “in the wild” so to speak. Thanks to science books above my age level and a healthy obsession with National Geographic television specials, I had a first grasp on the basics of reproduction at an extremely young age. (I can’t imagine what my mother thought when I asked for clarification on the mechanics of it.)

However, literature came to my rescue. I dug around and found the phrase used in the works of Honoré de Balzac and Leo Tolstoy. With the former, I accepted the use at face value seeing as how the picture being reviewed is as French as Balzac. With the latter, I was curious as to whether the phrase was used in Russia or if it was an English idiom substituted for a different Russian one. I checked with a Russian friend and received confirmation that, yes, this is a common and known phrase and concept. (A huge thanks to Maria for the assistance!)

So, “found in a cabbage patch” is pretty highly international, folks. (Do share if you know of other regional or national uses of the phrase.)

Finally, cabbage patch and stork stories were roundly criticized in the 1914 American book Teaching Sex Hygiene in the Public Schools by E.B. Lowry. Lowry considered such obfuscating to be damaging to the trust between parents and children:

“If you want your child to come to believe that you are an untruthful or an unreliable person, or that you are not conversant with the things that you should know, begin to tell him falsehoods and evade the truth when he is small. When your child of four or five asks you where the baby came from, tell him some fanciful story about the stork bringing it or that you found it under a cabbage leaf. He will find out soon that you have lied to him and will not bother you with other questions.”

The question remains: why cabbage patches? Well, I am going out on a limb here but I think it’s simply because cabbage was (and remains) an essential cornerstone of many European diets. Everyone had a cabbage patch or would have at least been familiar with the sight of one. And, remember, cabbages in the field are not the neat little spheres that we see in supermarket produce departments. They have a halo of large leaves that are sliced off before being presented to the public. I would wager that farmers would spot baby rabbits or perhaps the farmhouse cat concealed under these leaves fairly regularly. It would have been just a hope, skip and jump to add “And that’s where your baby brother came from.”

The Cabbage Patch Fairy may not be the first narrative film or made in 1896 but it is a good deal of fun and it showcases the kind of “for the public” entertainment that was the cornerstone of Alice Guy’s popularity.

Released on DVD as part of the Gaumont Treasures box set.