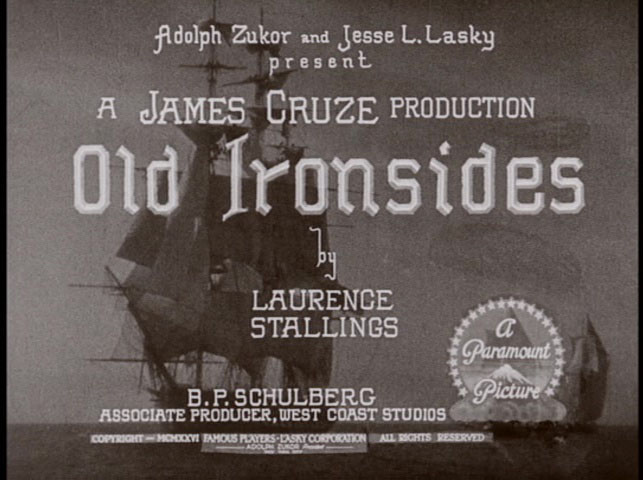 Unboxing the Silents by Movies SilentlyJanuary 18, 2019

I know a lot of you have been looking forward to this one! Old Ironsides, beloved adventure film, makes its DVD/Bluray debut after only being available on VHS for years.

Kino Lorber’s release features a commentary, booklet and a piano score adapted from the original release score by Rodney Sauer.

The film is available as both a DVD and a Bluray.

Old Ironsides is a proper rip-snorter of an adventure, by the way, with an absolutely impeccable cast: Charles Farrell, Esther Ralston, Wallace Beery and George Bancroft. It was one of many “real big real ship” movies that silent era Hollywood put out and one of the most popular. Definitely a must-see.

Now I know there is a slight kerfuffle because the film is not shown at sound speed and not interlaced but is progressive. (If you don’t know what any of this means, give thanks to heaven and keep it that way.) I absolutely hate interlacing and I hate silent films run at sound speed when they were clearly shot at a different speed so, in my opinion, Kino took the best option and I have zero interest in discussing this matter any further.

(I made the same decision to use progressive for my own DVD release.)

This is a most welcome release and I am very glad to have it in my collection.