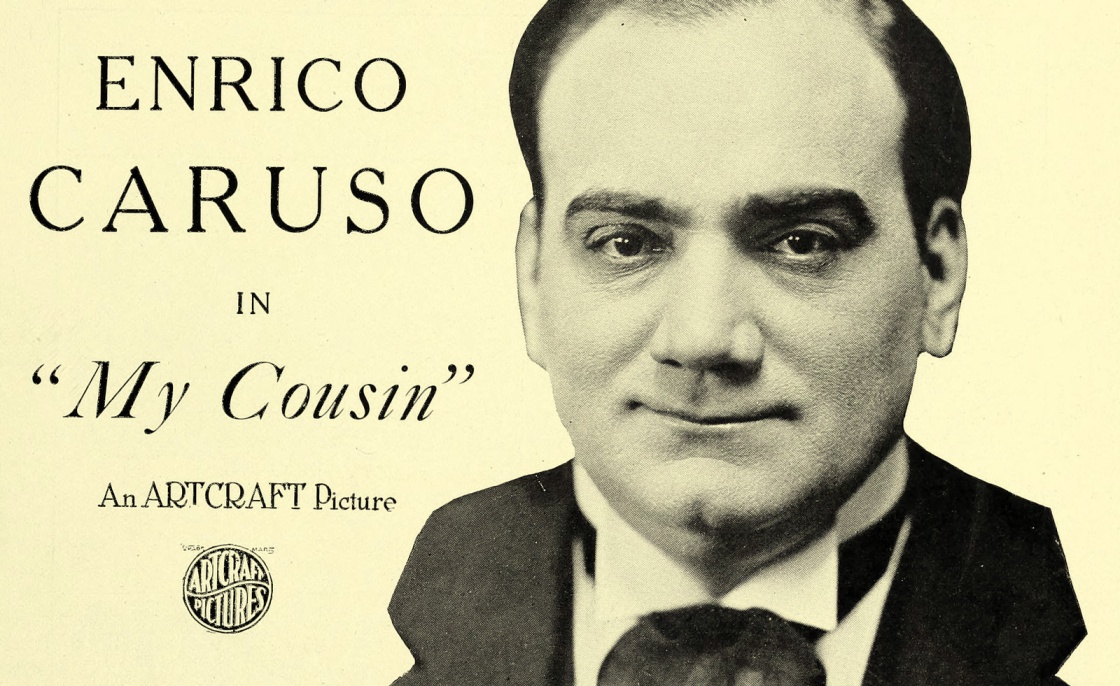 Opera legend Enrico Caruso tried his hand at being a movie star in this film. He plays two roles: a penniless sculptor and a famous opera singer.

Enrico Caruso needs no introduction, he’s one of very few celebrities from the late 19th and early 20th centuries who still has name recognition. One of the first bona fide recording stars, he was a fixture of the Met, a proud Italian and a happy adopted New Yorker. But did you know he was in silent movies?

It may seem a little odd for someone noted for their voice to star in a silent film but it’s no stranger than a model appearing on a radio show or podcast. In any case, the box office returns of soprano Geraldine Farrar’s Carmen showed that it could be done and done very successfully.

Famous Players-Lasky paid the handsome sum of $100,000 per picture to secure the services of the great Caruso and the first of these films, My Cousin, was released in late 1918. And just to add value, Caruso played not one but two roles in the story.

It’s the story of Tommasso (Caruso), a poor sculptor who works in plaster and dreams in marble. He gets a certain amount of respect around Little Italy because he claims to be the cousin of Caroli (also Caruso), the famous opera star. Tommasso is courting Rosa (opera singer Carolina White) but her father wants her to marry Lombardi (Henry Leone), a rich grocer.

The main—only, really—conflict of My Cousin comes about because Tommasso runs smack into Caroli and neither man acknowledges the other as family. How could he not recognize the cousin he has not seen since he was a child? (Don’t answer that!) I think it’s actually stranger that Tommasso did not recognize a famous and extroverted celebrity whose picture would have been all over magazines, postcards and posters, especially considering the patriotic pride that Caruso/Caroli inspires in the Italian-Americans featured in the film.

Rosa refuses to marry Tommasso if he isn’t the cousin of Caroli and leaves our hero high and dry. This seems like a pretty silly reason to break up and a petty reason to fall in love. I knew someone who swore up and down they were a cousin of Elvis Presley but you didn’t see me trying to marry into the family and I LOVE Elvis. I mean, they could have been, I have no idea, I just didn’t hang any matrimonial plans on it.

Anyway, it’s up to Caroli to act as a fairy godfather for our Cinderfella and sort these matters out. Will Tommasso win back Rosa? See My Cousin to find out!

The big question: How is Caruso. The answer: Pretty good. I could have done without the Keystone Cops mustache on Tommasso but in general, he does very well. Caruso was clearly an exuberant gentleman and that comes through on film but with minimal mugging, which is much appreciated.

Tommasso is obviously the more interesting character as he is the one with the struggle (minor though it is) and the low point. Caroli is basically there to swoop in and fix everything. The opera singer shares most character traits with the real Caruso, including a talent for drawing caricatures, and was intended to be Caruso at first. The fictionalization into Caroli was done at Caruso’s own request and I definitely understand his hesitation at having his real self interpreted by cinema. (For an example of a very strange, alleged biopic, check out Babe Ruth in Headin’ Home.)

Of course, all the rough edges are sanded off. The real Caruso threw himself into everything, including womanizing, and he had quite a temper. None of this is presented in the film and, frankly, it would have been surprising if it had been. One doesn’t pay $100,000 for a music star and then try to bring up the (whispers) monkey house incident.

(In 1906, Caruso was accused of pinching women’s backsides while they were watching the antics of the monkeys in the Central Park Zoo. The police claimed that he had slit the pockets of his overcoat to facilitate this behavior. Caruso claimed he was framed and grew enraged whenever the incident was brought up later. Most sources seem to agree it was a frameup but, then again, most sources are men.)

The plot of My Cousin is so slight that it could blow away if anyone were to sneeze on it. There are no real stakes other than a snotty neighborhood chick whose affection for Tommasso is based entirely on her believing his cousin is famous. Also, there was no real point to the dual roles as there is never any confusion about the identity of the two Carusos. This wouldn’t necessarily be a problem (after all, Alec Guinness played many, many more roles in Kind Hearts and Coronets with nary a mistaken identity) but when the plot is so very thin, I like to see a film make the most of its resources.

Film Daily praised the film lavishly and then makes a statement that may sound curious. “Most everyone will want to see Caruso on the screen, but likewise most everyone will feel that he will not be good.”

To understand this, we must discuss the way motion pictures were viewed in the mid- to late-1910s as opposed to how they had been viewed before. Famously, the movies were considered a step down for any stage star during the nickelodeon era but as the art gained in prestige and respectability, the lure of money, an easier schedule and worldwide recognition lured many a stage star to try their hand at the movies.

We’ve already discussed the phenomenal success of Geraldine Farrar but a great many of the stars who passed through the motion pictures simply didn’t catch on. Reading through trade papers of the period, we see ad after ad crowing about the casting of this or that star of the stage, opera or vaudeville. Look at their filmography and we see that they made a year or two’s worth of films as a lead and either returned to the stage or continued in the movies as a supporting player. (For an example, check out Rita Jolivet, who was presented with great fanfare in 1915 and never quite managed to become a film star.)

So, Caruso’s success was by no means assured, opera superstar or not. That being said, despite the positive notices for My Cousin, Caruso’s second film for Famous Players-Lasky was apparently shelved. The Splendid Romance (1919) had the same ingredients as My Cousin with Margaret Turnbull writing the scenario and Edward José directing. My Cousin seems to have been a flop (no solid numbers but circumstances do support this belief) and Caruso was apparently dissatisfied with his appearance on the screen and did not care to appear in more pictures.

(By the way, Edward José is probably best remembered as the Fool in Theda Bara’s vamp picture A Fool There Was.)

Caruso was certainly no Wallace Reid but he is appealing and likable onscreen, I just think he needed a meatier role. Lasky had introduced Geraldine Farrar to the screen in an adaptation of Carmen, one wonders if it might have been a better idea to give Caruso a shot at Canio in Pagliacci, his signature opera.

My Cousin is as light as light can be but it does put across the personal appeal of Caruso and is a chance to seem him move when you might have only heard him sing. It’s no masterpiece and desperately needed higher stakes but it’s an agreeable enough picture if you know what you’re getting.

Released on DVD by RCA as part of a set that includes a short documentary on Caruso and a CD of his recordings.