I cannot improve upon the original ad: “The story of a singer who at the height of his career loses his voice through the hypnotic influence of an evil, designing rival, and later adopts the films as a means of livelihood and becomes a great star.” You know, as one does.

(A huge thanks to Dan for assisting with this review!)

Readers of this site know that I adore the World Film Corporation, a 1910s Fort Lee-based studio that was home to Maurice Tourneur and Frances Marion, among others. The studio’s films have a sheen of quality and rare beauty and the performances are generally excellent.

The Stolen Voice has been on my radar for a while because, well, it’s insane. Take a gander at this ad and tell me you aren’t dying to see it: 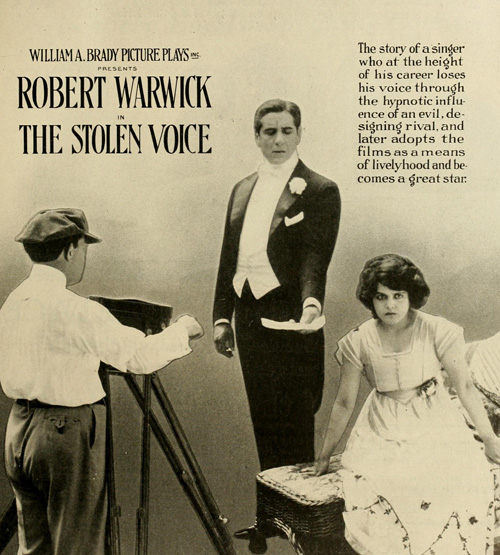 So let’s get started. Are you sitting down? Because this story is absolute madness! I hope I do it justice.

Gerald D’Orville (Robert Warwick) is a successful opera singer, the idol of many a lovely lady. One of these ladies is Belle Borden (Violet Horner), an adventuress who is the object of affection for Dr. Von Gahl (Giorgio Majeroni). Now the good doctor just happens to be a hypnotist. I’m sure nothing will come of THAT.

The other lady in this story is Marguerite Lawson (Frances Nelson), a shopgirl who loves the opera in general and Gerald in particular. Gerald’s other fan is Dick Leslie (Bertram Marburgh), an alcoholic actor who stops by Gerald’s dressing room for drinkie money.

As Gerald and Belle hit it off and Marguerite pines from afar, Dr. Von Gahl is being driven mad—mad, I tell you!—by Gerald’s charm and his singing. At last, he can take it no more. Gerald is singing and playing the banjo when the doctor strikes! He uses his hypnotic powers to take away Gerald’s voice, both singing and speaking.

The trick works like a charm and Gerald is ruined. Belle gives him a snotty kiss off. Nobody will hire him and so he is forced to (sob!) go into the movies! Now movies were not so maligned in 1915 as they were five years before but it would still have been a step down for an opera star. (Geraldine Farrar was told as much when she signed on with Lasky the same year.) The punchline? Even the movies don’t want him.

Fortunately, Dick is sober thanks so the good advice Gerald gave him earlier in the picture and he’s the boss so he hires both his old friend and the shopgirl Marguerite. They’re a hit! Gerald even gets to save Marguerite when her canoe goes astray while filming a wilderness picture. This is very important to the plot and not an excuse to show Robert Warwick in a loincloth.

Spoiler: Gerald is so successful on the screen that when Dr. Von Gahl goes to one of his films with Belle, he bursts into a frenzied rage, has what seems to be a seizure in the middle of the movie theater and falls down dead. And with that, Gerald gets his voice back and proposes to Marguerite. Bravo! Bravo! A standing ovation! That was… ah! (Kisses fingers.)

If you are here for logical storytelling, look elsewhere. Ditto if you want high art. But if you want a madly entertaining piece of Hollywood (well, Fort Lee) storytelling, then you have come to the right place.

I mentioned Geraldine Farrar earlier. I wonder if this film was in part inspired by her upcoming motion picture debut (due officially to the need to rest her voice). I mean, besides the obvious Gerald/Geraldine thing, the dates line up. The earliest reference I can find is a $25,000 offer from Metro in April of 1915. The Stolen Voice was released in August of that year, so plenty of time between the announcement and production. Farrar would sign on with Lasky, be teamed with DeMille and the rest is history.

Whatever the inspiration, the highlight of the film is the utterly mad and overbuttered Dr. Von Gahl. Giorgio Majeroni is utterly over the top and I am surprised that there was a stick of furniture left after he was done chewing the scenery. I am absolutely not complaining. No, I applaud him. When one is given such a mad role, one is almost obligated to engage in a bit of mustache twirling. His death scene is particularly fine with lots of mad arm flailing but his hypnotism scenes are also great.

Moving Picture World’s review stated that they wished the hypnotism scenes had been given a more “scientific aspect” and Motion Picture News states that “we are inclined to doubt the credibility” of the scenario. Boo! Hiss! They’re no fun at all!

There is something really beautiful about a film with a mad premise that owns itself and boldly plays it out with a straight face. It’s not easy to do and there are remarkably few films like The Stolen Voice (though, as I stated before, they seemed more common in the silent era). This is a treasure, a gem to be prized. (For the record, my other bonkers favorites include Tempest and The Soul of the Beast.) Oh sure, you can have “good taste” and “artistry” if you want or you can have a jazz-talking elephant and a Russian revolutionary who looks like Alfred E. Neuman.

Plus, we get the bonus of more behind-the-scenes shots of World’s Fort Lee production center (you can see even more of it in A Girl’s Folly) and an interior shot of a 1915 movie theater, so this film is a treasure trove for cinema history geeks as well.

I should also mention that Robert Warwick is as appealing as ever and brings both dignity and gravity to a very silly role. Frances Nelson is similarly captivating and also cleverly plays things with a light hand, leaving the scenery chewing to the mad hypnotist.

This is the first time I have seen the work of director Frank Hall Crane but I will be certain to keep my eyes peeled for his films in the future. I see that he directed a 1914 short version of Jane Eyre and his obvious aptitude for peculiar and eccentric subject matter would make him an ideal choice. It seems that the George Eastman House, which holds a copy of The Stolen Voice, also has Crane’s adaptation of The Moonstone by Wilkie Collins. Swoon! Want!

In a great blow to the motion picture industry, it seems that screenwriter Paul McAllister did not pen another screenplay after this but did enjoy a career as a character actor. He played Noah in Michael Curtiz’s Noah’s Ark and had supporting roles in Beau Geste, She’s a Sheik, The Winning of Barbara Worth and Manhandled. He also acted in World’s adaptation of Trilby, a far more famous tale of hypnotism, which was released a month after The Stolen Voice but I wager it still wasn’t as much fun. (Fortunately, we may find out. The picture survives in several archives.)

I love this movie to death! It is exactly the sort of bonkers story (combined with gorgeous craft) that made me fall in love with silent films in the first place. It’s a darn shame that it hasn’t been released on home video because this melodrama is a treasure.

The Stolen Voice used to be available for streaming on the George Eastman House website but no longer. There is an edition for sale that blurs out the GEH logo (while adding its own watermark) and plays havoc with the projection speed. I cannot recommend it, especially given its rather steep price tag.