After the Silents, Talkie Review by Movies SilentlyMarch 30, 2017

Welcome back! In this series, I discuss the careers of silent movie personnel during the talkie era. Today, our subject is a favorite movie from my childhood: The Great Race.

This review is part of the Jack Lemmon Blogathon hosted by Wide Screen World and Critica Retro. Be sure to read the other posts!

After the review, I’ll be covering the work of a silent veteran in the film’s crew. Set decorator George James Hopkins was only twenty-one in 1917 when he designed the costumes and sets for a little movie called Cleopatra. Yes, that Cleopatra. 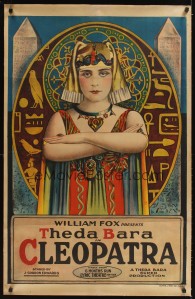 Home Media Availability: Released on DVD, Bluray and via streaming.

It’s the early 1900s, women don’t have the vote and the world is in love with daredevils and their wild stunts. The biggest star of the stunt world is the Great Leslie (Tony Curtis), a sparkling good guy-type whose teeth glisten almost as much as his white suit. He is assisted by Hezekiah (Keenan Wynn), his faithful bald-pated valet.

Leslie’s greatest rival is Professor Fate (Jack Lemmon), who conspires to steal his opponent’s crown by any means fair or foul. Usually foul. He is assisted by Max (Peter Falk), his goofy henchman, who does not seem to have this “henching” business down yet.

The rivalry reaches the boiling point when Leslie proposes a cross-continental race from New York to Paris. Fate vows to win and prove that he is the greatest.

The ringer in all this is Maggie Dubois (Natalie Wood), a Suffragette reporter who enters the race on behalf of her newspaper in order to send back exclusive stories and photos from the event. This naturally causes issues as Leslie and Miss Dubois immediately begin to set off sparks. Things only get wilder as the race zips around the world, first to a western town, then to the frozen north, then to a Prisoner of Zenda-esque kingdom with a ruler who looks suspiciously like Professor Fate! Who will win the race? You’ll have to watch the movie to find out!

Directed by Blake Edwards after he completed a pair of Pink Panther films, The Great Race was an expensive, arduous shoot. While it wasn’t beloved by critics on its initial release, it was a financial success.

Curtis, Falk. Wynn and Wood are all delightful but the standout is Jack Lemmon. He takes to his villainous role like a duck to water and has a grand time chewing at the scenery and shrieking, “Push the button, Max!” Lemmon is equally fun as the campy Prince Hoepnick, lush and pug fancier. Both characters are over the top but in completely different ways, a testament to Lemmon’s versatility even in the most exaggerated roles.

Most of the gags land exactly as intended and the spot-on Zenda spoof is the highlight of the film. Where else would you get two Jack Lemmons, a swashbuckling duel and a pie fight? 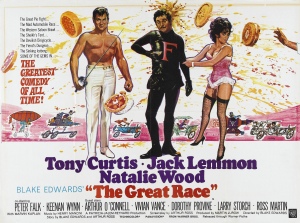 The pie fight took five days to film and was challenging because Edwards opted to use real baked goods. Spoiling projectiles were smelly but what no one realized was that real pies were also heavy. Jack Lemmon claimed he was knocked out several times because the pies landed as heavily as cement. Natalie Wood choked when a pie hit her in the mouth. All in all, a dangerous bit of business, especially since pies had grown in size since Charlie Chaplin’s Behind the Screen days.

(Needless to say, real pie fights– as opposed to a single pie in the face– were rare in silent films. Silent comedians threw everything up to and including the kitchen sink at one another, why limit themselves to just pies? And Professor Fate is not based on any silent movie villain but is more of a spoof of Victorian and Edwardian melodrama villains.)

That’s not to say that the film is perfect. It’s too long, certainly. The “Nyuk nyuk, aren’t Suffragettes a scream?” jokes were old when Anita “I got mine, nuts to you” Loos was telling them. I could have done without the cliched lake-bath-peepshow. Still, all in all, this is a fun, goofy picture that has aged better than most Blake Edwards films, at least in my opinion.

The Great Race is one of the best of the mid-century comedy extravaganzas and Jack Lemmon is an utter delight in his dual roles. It’s not perfect (what film is?) but it’s grand fun, especially for classic movie fans.

Availability: Released on DVD, Bluray and via streaming.

Future four-time Academy Award winner George James Hopkins was a young sprout of twenty-one when he received the assignment of a lifetime: Design sets and costumes for the lavish Fox production of Cleopatra starring vamp queen Theda Bara. Money was no object. A thousand dollars a yard for that jeweled fabric, you say? Buy it!

This is a case of too much of a good thing being perfect. Take a gander: 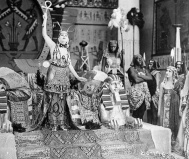 Hopkins became an integral part of Bara’s team, designing for Salome (NOT the one with Nazimova) and Du Barry, as well as numerous other Bara vamp flicks. 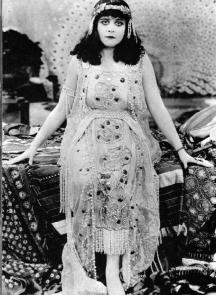 During the 1910s, Hopkins seemed determined to try out every job on the motion picture lot. He acted, worked as a production manager and wrote (most notably The She Devil, a 1918 Bara vehicle). His main interest and talent, though, lay on the design side of things and his glorious work is still admired by movie fans the world over.

Hopkins was a player in the scandal surrounding the William Desmond Taylor murder (we’re not going into that here because GIVE IT A REST, PEOPLE!!!) but such a talented designer could not be sidelined for long. He signed on with Warner Brothers and decorated the sets for Casablanca, Mildred Pierce, Life With Father and A Streetcar Named Desire. Those films are all well and good but what about the razzle-dazzle? We demand razzle-dazzle!

The extravaganza craze of the 1950s and 1960s suited Hopkins to a T and he was able to indulge in the sort of lavish confectionery that he had enjoyed employing during his salad days. Auntie Mame, The Music Man, My Fair Lady, Hello, Dolly! and, of course, The Great Race all showcased his lavish sets.

The talent and versatility of George James Hopkins is universally acknowledged but let’s also take a moment to remember the wet-behind-the-ears kid who designed a pair of bejeweled pasties and set the movie world on fire. We salute you, Mr. Hopkins!