Wallace Reid and Harrison Ford team up as a pair of buddies trying to cross Central Europe with a satchel full of cash and a revolution brewing. Considerably less fun than it sounds, thanks to the protagonist’s xenophobia and a script peppered with morons.

This movie was a bit of a slog for me. Rarely have I run into a silent film protagonist who annoyed me more. (Well, not since The Boob or Peck’s Bad Boy… It’s been a bad year, okay?) But when the viewing schedule gives you lemons, you make lemonade in the form of a very vicious review. I shall have my revenge!

Hawthorne of the U.S.A. is one of the surviving films of Wallace Reid, a boyish, outdoorsy sort of actor who was one of the top stars in American cinema at the time. His untimely death (stemming from a drug addiction) has overshadowed his accomplishments on the screen but at his best he could charm like no one else. This movie is not his best.

We meet our heroes in Monte Carlo, where proud American Anthony Hamilton Hawthorne (Wallace Reid) has broken the bank, that is, won more money than was on the table. He and his friend, Harry Blake (Harrison Ford, no relation), pack up the cash and continue on their European road trip.

However, the two men are being watched. Hawthorne makes some rude remarks about icky old European monarchs within earshot of Colonel Radulski (Charles Ogle, the screen’s original Frankenstein monster), a military man with a taste for revolution. He is from Bovinia (We’re going to really milk that one, eh? Get it? Get it?) and overhears that the Americans will be passing through his country. Surely the Monte Carlo jackpot could be of use to the revolution…

The merry Hawthorne and the nervous Harry race along the road and soon are booking it through Bovinia when, wouldn’t you know it, Hawthorne loses his hat and jumps over a wall to fetch it. And so we meet our heroine, Princess Irma of Bovinia (Lila Lee). She’s a grown woman but she also still plays with dolls and has imaginary friends. An infantilized heroine? Oh goody, oh joy.

Hawthorne and Irma get along swimmingly, of course, and so he contrives to stay in the country over Harry’s objections. (Harry’s fiancée is just over the border in a far safer country.) One problem is that Irma never told Hawthorne she is a princess. That little omission is about to cause some problems.

Colonel Radulski has reported to his fellow conspirators that Hawthorne is in the country and carrying a fortune in cash because, apparently, banks are un-American. At this point, we are positively flooded with new characters. There’s bearded weirdo Nitchi (mislabeled in the title card as Tully Marshall; he isn’t), cabinet minister Count Henlow (Guy Oliver) and Prince Vladimir (Edwin Stevens), the mastermind who also plans to marry Princess Irma.

While Harry is preparing things for the arrival of his fiancée, Hawthorne does a bit of snooping and finds a meeting of the conspirators. They are overjoyed to see Hawthorne and tell him that they would like to use his money to pay the army—the soldiers are threatening mutiny over back pay—and take over the country from the despotic king. Hawthorne remembers Irma’s torn slippers and immediately agrees.

Um, generally speaking, it’s best to do a little bit of research before agreeing to finance a revolution. Just a thought. (Hawthorne is not very bright.)

And now we meet the king of Bovinia, Augustus III. The title card claims he is played but Jack Brower but it is clearly Tully Marshall. Does this mean that Nitchi is played by Jack Brower? And how did the title cards get so muddled? Methinks that this is a reissue print (no one in the silent era could mistake Tully Marshall). Even the AFI catalog has this info wrong. Sigh.

Anyway, Augustus is a sweet guy but the revolutionaries are quite correct: the army has not been paid in ages. Instead of, you know, attending to matters of state, Augustus spends his day eating walnuts and trying to mooch cigarettes from his private guard. Um, okay then.

Here’s the deal: a nice monarch who lacks brains and savvy is just as harmful to his nation as an evil monarch. If your surgeon has a great bedside manner but isn’t smart enough to realize that your heart is no longer beating, you’re just as dead as you would be if a malicious surgeon intentionally killed you. I mean, it’s lovely that Augustus has a pleasant personality but that doesn’t do his impoverished people a bit of good.

Hawthorne meets Irma again, gets the scoop on her royal parentage and gets the royal brush-off when she discovers he doesn’t have a title. Most people would move on the Hawthorne is nothing if not determined. However, he has already signed on with the revolution, which somewhat threatens his attempts to join the royal family.

Meanwhile, thanks to Harry’s work, a small-scale application of Keynesian economics and a little fraud, Bovinia’s economy is booming. And after a little thought, Hawthorne decides that monarchy is just lovely as long as the royal princess is hot enough.

Glad we got that settled. Hoo boy.

Wallace Reid was a charming actor but there’s not much that can be done about the role of Hawthorne. Basically the personification of the Ugly American, Hawthorne spends the entire film smirking at his European surroundings and backs up his attitude with snotty little gestures like deliberately dropping money on the floor so that the innkeeper will have to bend down to pick it up.

Further, the movie will not let us forget for a moment that the hero is American. In the first few seconds of the film, we are informed that Hawthorne the American broke the bank at Monte Carlo and then we are given a title card informing us that our hero is in fact from the U.S.A. Thirty seconds later (I timed it) Hawthorne informs a reporter asking for his name and title that he is “Hawthorne, citizen of the U.S.A.” I’m not exactly sure what the point of this is but since it seems so important to them, I will be sure to refer to people by their nation of origin whenever I talk about them.

Of course, there’s absolutely nothing wrong with an American protagonist. In fact, an American or English protagonist is practically required in these Ruritanian romances. I just don’t appreciate having my intelligence insulted every ten seconds. I got it the first time, thanks. Oh, they’re telling me again. I guess I didn’t understand after all. Poor silly old me. (I think if I met Hawthorne in real life, I would pretend to forget his citizenship. “Oh yes, you’re the Australian! No? Canadian? Irish? Filipino? Cambodian? You’re American? Funny, you really seem more Moldovan to me.”) 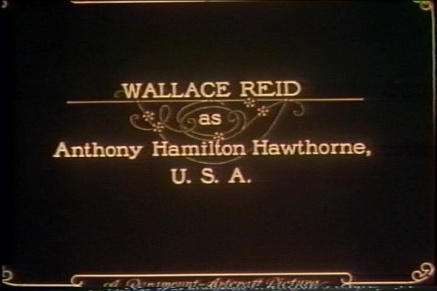 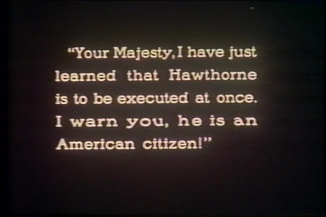 Harry is the more appealing character by far and the only one of the heroes who seems to possess any common sense. In fact, while Hawthorne is off insulting the locals and generally being a pill, Harry is the one who actually gets stuff done or is left to do the boring/dirty work.

Hawthorne breaks the bank and brags. Harry goes and gets a satchel for the loot. As they are leaving with that satchel of gold, Hawthorne loudly announces their intended destination while Harry tries to shush him. A real rocket surgeon, is this one.

Hawthorne manages to lose their passports (what kind of idiot keeps passports in his hat while he’s speeding in an open top car?) and has to vault over a wall to get them back. He then wastes scads of time canoodling with a princess, leaving Harry high and dry guarding their sack of cash.

Harry wants to cross the border to a safer nation to see his sorta-fiancé but Hawthorne overrides him and demands they stay in an unstable country with a fortune in cash because he met a really cute chick.

I could go on but I think there is enough evidence. The prosecution rests. Um, why are these men friends again? And can we switch heroes? We want Harry, we want Harry!

Lila Lee is similarly stymied by her ridiculous character. The film falls victim to the bizarre notion (most often found in the films of D.W. Griffith but he was not the only culprit) that charming young ladies must act like hyperactive and somewhat dim children. Lila, dear, you’re eighteen. Stop having imaginary friends. This is not Drop Dead Fred.

As for the baddies, well, it’s really hard to comment because there are so many of them. There’s the guy who’s a cabinet minister, the corrupt prince, the other cabinet minister, the hair guy… We basically have four characters doing the work of one, which is particularly noticeable in such a short film. Even the screenwriters seem to have gotten bored with their bevy of villains as near the end of the film, they focus exclusively on the prince and the hairy guy, sort of forgetting about everyone else. If they don’t care then why should I?

For reasons outline above, the script is absolutely awful. Too many characters, not enough motivation to go around and a very unlikable hero. As the final insult, the film drops its pretentions of democracy and equality. At the end of the film, Bovinia becomes a Central European banana republic with a puppet king under the sway of one rich foreigner and the film treats it like it’s some lovely thing. Yay?

Hawthorne of the U.S.A. is a Ruritanian bust. Harrison Ford is the only reason to see the picture and even he seems fed up with it. Who can blame him? The hero (did you know he is an American?) is irredeemably obnoxious, the plot relies on everyone passing around the idiot ball and the screenwriters seem have been confused by these things we call “editing” and “a second draft”. Director James Cruze doesn’t seem to be in control of the plot and the whole is a huge mess. See it if you must but I found it to be a chore to get through.

Hawthorne of the U.S.A. was released on DVD by Grapevine.