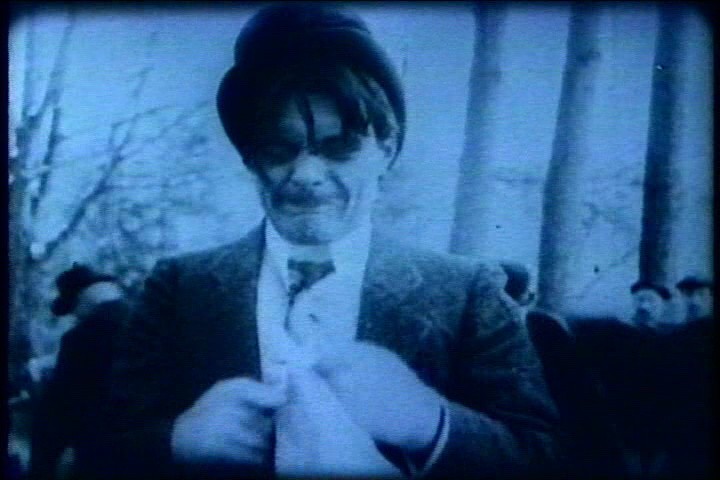 French charmer Max Linder is in trouble again! This time, he is trying to have a bit of winter fun with his ice skates. Silly Max. It’s fun to see a groundbreaking comedian in one of his earliest films as his signature character.

This is part of the Winter Sports Blogathon. Be sure to read the other posts!

Where would we be without Max Linder? The pioneering French comedian brought sophistication and a light touch to silent comedy years before Mack Sennett, the king of slapstick, ever set foot on a movie set. Linder’s balletic grace and charm made him one of the very first international superstars.

Max Learns to Skate is a significant film in Linder’s career. He had been making films since 1905 but it was in this film that he introduced his Max character, a dapper little man whose emotions get the better of him and land him in ridiculous situations.

(Max Learns to Skate is sometimes listed as a 1905 film but this is generally considered to be a mistake and the 1907 date is the correct one. Also, any claim of being “the first” during this period must always be taken with a grain of salt. So many films from the first two decades of cinema are lost that it is all but impossible to back of claims of this nature, a situation that some earlier filmmakers have used to their advantage as it allowed them to pad out their resume.)

Now I must issue a word of warning. While Chaplin described Linder as his professor and he is generally praised as an important pioneer, it has become stylish in some circles to bash the poor man. “Okay for his time,” they sniff, “but nothing compared to Chaplin or Keaton.”

Yeah, well you know who weren’t making movies in 1907? Chaplin and Keaton. In fact, the only name brand silent comedian I can name who was active in 1907 was Ben Turpin. Put that in your pipe and smoke it.

But Linder’s appeal is not just in his status as a trailblazer. While his early movies reflect the filmmaking techniques of the 1900s (Show the feet at all costs! People pay to see the whole actor!) his pep, personality and… well, I guess the word is sparkle, come across loud and clear.

The story of Max Learns to Skate is simple. Max, a dapper man about town, visits a frozen lake, confidently rents some skates and then goes out on the ice. Skating, however, is far more difficult in practice than it is in theory. Max’s clumsiness on the ice ends up causing a brawl and he is forced to retreat in humiliating defeat. The film’s lone close-up is reserved for Max’s sobbing face.

What is interesting to see is how well Linder was able to project his character’s persona to the audience. Silent films of the 1900s were a challenge because the performers had to have an instinctive grasp of the differences between stage and screen (not too broad!) but they also had to find a way to make themselves distinct, likable and appealing while the camera stayed at a distance (not too subtle!). The key to Max Linder’s success was his natural ability to play just right to the audience and overcome the technical limitations of 1900s cinema.

Just watch Linder as he approaches the skating rink. We do not see his face distinctly but his jaunty walk and broad smile tell us everything we need to know. The Max character was fun-loving but often found his search for amusement to be thwarted. Once he gets on the ice, Max’s confidence is gone, as is the spring in his step. He flails and falls and grabs at the legs of his would-be rescuers. Even though his character is ostensibly clumsy, if you watch Linder silhouetted against the ice, you can see how graceful he was, how controlled his movements were.

Max Learns to Skate lasts for only five minutes but it is a valuable look back at one of the most important comedians of the silent era. Eleven decades after his movie debut, Max Linder proves that he still knows how to charm an audience.

Max Learns to Skate is available on the Comedy of Max Linder DVD from Grapevine.