Who were the most popular stars a century ago? Once again, Motion Picture Magazine gives us a clue. In 1913 and 1914, they held popularity contests to discover the top stars in the eyes of their readers. In 1915, the magazine did things a little differently. They held the Great Cast Contest. Readers could vote for performers in various categories instead of voting for everyone in a huge lump.

Here is the announcement detailing the contest and the twelve voting categories:

And the voting coupon: 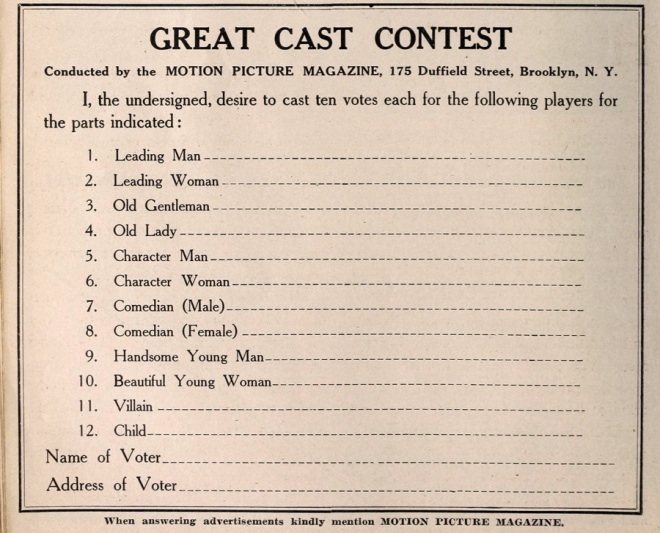 And prizes were offered to the top performers (more on them in a bit).

I am intrigued by the $50.00 Mexican rug. No details are given. A mystery. The rest of the prizes are weirdly random. Like the editors just went to a garage sale and saw what they could get.

But who were the victors in this contest? Well, the magazine publishes it two ways. First, the winners for each category. Next, the overall winners by total votes. 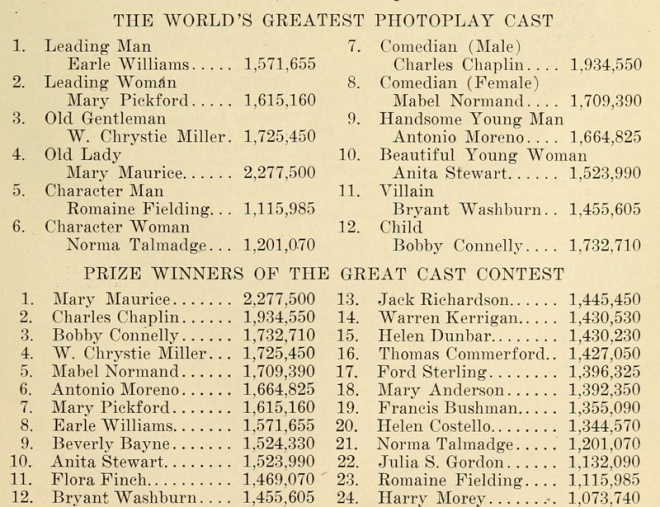 Notice something about this year’s list? Recognizable names! (It’s also the first year in the series in which a woman tops the contest.) Here are the top 15 winners by votes in 1915:

As you can see, Charlie Chaplin has jumped from zero to #2 between 1914 and 1915. Mary Pickford slid down a few spots but from what I have seen of her 1914-1915 output, that’s not surprising. She would hit her stride a few years later.

Of the top five, both Chaplin and Mabel Normand are familiar faces but what about Mary Maurice, Bobby Connelly and W. Chrystie Miller? Well, Maurice and Miller were both in the “mature” category of performers while Connelly was a child actor. Sadly, all passed away within a few years of this contest. Maurice died in 1918 and Miller and Connelly both died in 1922. (Young Connelly was only thirteen.)

Mary Maurice’s performances are hard to come by (though not as rare as 1913 victor Romaine Fielding). Her Vitagraph short A Helpful Sisterhood is available on DVD as part of a Norma Talmadge collection

W. Chrystie Miller is an oddity. His filmography drops off after 1915. Presumably, his status as a D.W. Griffith regular sealed his selection. Griffith’s Biograph films were phenomenally popular and remained in circulation for long periods.

Little Bobby Connelly was only six when he won the honor of being the top child performer. Modern audiences will likely know him from the 1920 Olive Thomas vehicle

As for Normand and Chaplin, you can see them anywhere. If you want to see the work that made both of them so very popular on this list, I recommend the box set Chaplin At Keystone: An International Collaboration of 34 Original Films

For your reading pleasure, here is the complete contestant list. This was assembled from an earlier round of voting so the tallies will be a little different. Note that one player can be voted into multiple categories. Also note that Chaplin was nowhere to be seen in this early round. This illustrates his rapid rise to the top as his films spread across the nation.

Whew! But what about those crazy prizes? Who took what?

The motion picture star system was beginning to solidify and take on the shape that many silent movie fans will recognize. Still, it is intriguing to know that three of the top five were a mature lady, a mature gentleman and a little boy.

(Thanks to the Media History Digital Library.)