Snubbing like it’s 1929: Who got left out in the cold during the first Oscars?

The very first Academy Award ceremony (they weren’t called the Oscars just yet but I’m using the term because it’s short and I’m lazy) was also the last one to include silent films exclusively. Hollywood was still in the throes of the talkie revolution, though the victor was already obvious. Still, the 1929 ceremony gave silents one last chance to shine. It would be over eighty years before a silent film swept up major awards again.

The 1929 awards also ran on a different schedule. Rather than honoring the films of January to December of 1928, the eligible films had to have opened between August 1, 1927 and August 1, 1928. In another touch we may find odd, actors were honored for multiple roles.

Finally, one of the biggest differences between the first Oscars and the modern version was that the Best Picture prize was split in two. Essentially, it was divided between a crowd-pleaser (Wings) and an art film (Sunrise). I wish they still did this but let’s move along to the snubs.

Oh, and I should note that I will only be considering Hollywood features for the shoulda woulda coulda. Yes, there were brilliant films made throughout the world but the original awards stayed in America and so I will too. This article is strictly a matter of opinion. There are no right or wrong answers.

Also, it goes without saying that any speculation on who should have won in 1929 will have to take into consideration the fact that many silent films are either lost or locked away in vaults. In short, there is no way we modern viewers can replicate the experience of the original Academy voters.

However, considering that current Academy members freely admit to not watching all the films they cast votes for, I would say we are in a pretty good position to argue our points. (Why don’t these Academy members—some of whom have not worked in the industry in decades—watch the films? A variety of reasons but one memorable dolt stated that viewing the ten best picture nominees is just too haaaaard.)

Heck, I think the well-informed silent viewer is probably in a better position to discuss the merits of these films than your average doddering Academy member.

So, the original Best Picture winners. I agree with the artsy award going to Sunrise. Nothing against The Crowd but I happen to think Murnau’s 1920s fable was the perfect melding of Germany and Hollywood. The Man Who Laughs really deserved a nod but films with macabre and horror elements just weren’t getting any respect at the time.

As for the other film… 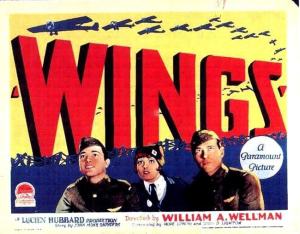 I don’t hate Wings. I really don’t. It has its moments, the flying scenes are excellent and Clara Bow is a doll. However, it is also as clichéd as anything—these plot devices were old in 1907, let alone 1927. I saw it once but I really have never had an urge to see it again. In the end, it’s a nice crowdpleaser but not the best of the best.

As for the other nominees, The Racket is okay and 7th Heaven is a bit treacly for my taste.

My two choices weren’t even nominated but both are real corkers. Chicago is, of course, the tale of Roxie Hart and her attempts to get away with murder. It’s saucy, sly and I dare you to leave the film without grinning. Where Wings has cliché and tedium, Chicago has spice and spunk.

The Cat and the Canary is not a perfect film. It’s a dark little horror-comedy with a bit too much comedy for some people’s taste. What I love about it is how jovial and merry it is as it pokes fun at the old dark house genre before it had really taken off. It’s also one of the most beautiful comedies of the silent era, with director Paul Leni’s wonderful imagination running wild.

Such a pity that Show People is a few months out of the date range. Sigh.

Now we come to the performers. Who should have won those statuettes?

Who should have won: Gloria Swanson (Sadie Thompson)

Gaynor wasn’t bad in her roles, quite the contrary, but she did not have the fire that Swanson brought to her performance. We believe in the colorful, flawed Sadie and we want her to succeed in building her new life. Swanson gives her all and it shows. 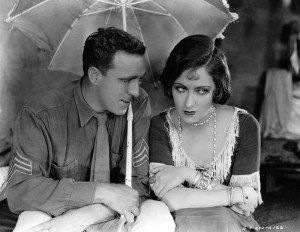 PS, The Wind misses the eligibility period or Lillian Gish would have swept this. No pun intended. Or was there?

The Best Actor statuette went to Emil Jannings. I don’t care much for the man personally but I am hard pressed to think of anyone who deserved it more. The eligibility period just misses the Lon Chaney performances I would have selected and while John Barrymore had some good appearances, he doesn’t match Jannings. Oh, and not nominating Conrad Veidt for his work in The Man Who Laughs? Now THAT was a snub.

(There is a rumor that the Academy members originally voted for Rin Tin Tin. They loved their Germans, no? It’s a funny story but I can find no evidence of it happening. Sounds like a fish story concocted after the fact.)

Talk about a snub! Supporting actors were given no award of their own until the categories were added at the 1937 ceremony. Let’s have a bit of fun and speculate as to who should have been nominated and who should have won back in 1929.

Louise Dresser (The Garden of Eden) Sly, smart, world-weary and maternal. What a range!

Martha Mattox (The Cat and the Canary) Creepy but creepy done very well.

Olga Baclanova (The Man Who Laughs) The vamp of the hour. Also amusing to hear people say, “Isn’t that Madonna?”

And the Oscar goes to…

Louise Dresser. A brilliant actress of wonderful range in one of her most charming performances.

Harry Carey (The Trail of ’98) Our western hero turns to evil and does a smashing job of it.

And the Oscar goes to…

Louis Wolheim! What a mug! What an actor!

No nomination for F.W. Murnau? You know, the guy who directed Sunrise? Nothing for Paul Leni? Good grief. I can’t even. I can’t.

This is my contribution to the 31 Days of Oscar Blogathon. Be sure to read the other posts!