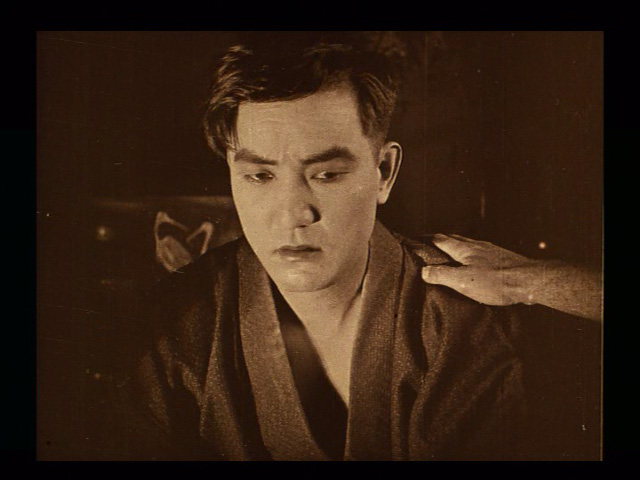 Sessue Hayakawa headlines a story of art and madness. It’s all about a crazy painter who dreams of finding his princess– and the problems that arise when he finally does win her. Made by Hayakawa’s own production company and co-starring his talented wife, Tsuru Aoki, The Dragon Painter is yet another once-lost silent film that has been rediscovered.

Casting Japanese actors in Japanese roles? Why, it’s so crazy it just might work!

Sessue Hayakawa’s career is both astonishing and unlikely. Born in Japan in 1889, he became a popular Hollywood star of the early feature film era.

What he was working against:

Hayakawa started his film career in an America where something called the Japanese and Korean Exclusion League was not only a thing, it was a socially-acceptable thing. Teddy Roosevelt had negotiated the so-called “Gentlemen’s Agreement,” which was designed to prevent Japanese immigration. Chinese laborers were forced to bury their dead in potter’s fields in Los Angeles and were subjected to racist policies in San Francisco.

On the artistic side of things, white actors would regularly portray Asian characters. (How common was this? Enough to fill 300+ pages in the academic study Hollywood Goes Oriental.) The stereotypes conveyed were quite offensive. Speaking in broken English intertitles and sometimes with “no tickee, no washee” spelling, Chinese or Japanese characters would shuffle about and worship Buddha (?) while smoking opium. Even when they were heroic, Asian characters would generally fall into the love-a-white-character-and-then-heroically-die-to-avoid-any-questions-of-an-interracial-match cliche.

By the way, someone is going to ask this so I may as well answer it now: No, I do not like Broken Blossoms. At all. I just cannot stomach that particular kind of violence. Oh boy, am I ever going to get in trouble for typing that. (Bolts door.)

But back to Sessue Hayakawa and Asian stereotypes.

Before we modern viewers pat ourselves on the back, just think of how many East Asian stereotypes still exist in mainstream Hollywood movies. Asian men can be wise mentors, martial arts masters or scientists. Lovers? Well… Asian women are cast doctors, action babes, or dragon ladies. Tong, Kkangpae or Yakuza connections a plus. Progress! There are exceptions, thank goodness, but not nearly enough of them.

And these are just the stereotypes that plague Japan, China and Korea. We have not even started with Southeast Asia, the Indian Subcontinent, Asiatic Russia or the Middle East.

And yet, amidst all this racism and acceptance of non-Asians playing Asians, Sessue Hayakawa managed to thrive.

What did he have on his side?

I am going out on a limb but if you cornered me and forced me to name the best actor of the ‘teens, I would have to say Hayakawa. He possessed the rare gift of being able to underplay intensity. He was virile, he was dignified. He was certainly one of the handsomest actors of his day.

Hayakawa ran into some of the issues that would stymie other foreign-born and minority performers: What obligation did he have to speak for his country of birth? Would accepting villain roles damage race relations? How far can an actor be separated from his roles? How far can nations be separated from actors in the popular imagination? There are no easy answers.

You see, Hayakawa played his share of villains. His breakout role in The Cheat was pure Yellow Peril but his performance was groundbreaking in its subtlety. Japanese-American activists understandably took exception to a Japanese character being portrayed in such a way. Hayakawa maintained that he was just playing a part.

Tired of the same old same old, Hayakawa formed his own production company. This is where The Dragon Painter comes in. Co-starring Hayakawa’s wife, Tsuru Aoki, it attempted to bring the real Japan to an American audience.

Relatively few of Hayakawa’s silent films survive. The Dragon Painter was thought lost for decades but then resurfaced in a French archive. It is now praised as one of Hayakawa’s finest offerings. Let’s see if its reputation is deserved.

The story concerns Tatsu (Sessue Hayakawa), a wild young man who paints and draws in the mountains of Japan. The local villagers are afraid of the unpredictable and sometimes violent artist. He is living under the delusion that his beloved princess was turned into a dragon and he searches for her, all the time painting pictures of nothing but dragons.

Meanwhile, renowned artist Kano Indara (Edward Peil) is bemoaning the fact that he has no son to pass on his skills. His daughter, Ume-Ko (Tsuru Aoki), just won’t do and no would-be apprentices have shown the necessary skill. Kano has fallen into a depression because of this. See where the patriarchy will get you?

Kano’s friend, a surveyor named Uchida (Toyo Fujita), has been assigned to the very mountain where Tatsu lives. He finds some of Tatsu’s paintings, recognizes his skill and immediately tries to persuade him to see Kano. Tatsu only agrees because he is told that Kano knows where the princess can be found.

Once he meets Kano, the depth of Tatsu’s genius is clear. You see, he claims to only paint dragons but his picture are all of mountains, trees and lakes. Where is the dragon? Sleeping at the bottom of the lake, of course.

Tatsu does not want to stay but changes his mind when he sees Ume-Ko, whom Kano has dressed as a fairy tale princess. Tatsu demands to marry her but Kano says he will only agree if the young man becomes his apprentice and proves himself worthy as a son-in-law. Tatsu agrees even though he has to (shudder) live indoors and (gasp) wear clean clothes.

This may seem like a raw deal for Ume-Ko. (“I found this crazy, dirty guy who paints real good. Daughter, meet your husband!”) However, she quickly falls for Tatsu so it’s all right. In any case, this is a fairy tale.

Tatsu and Ume-Ko are married and he is overcome with bliss. However, Ume-Ko and Kano are horrified to discover that Tatsu can no longer paint. His genius was fueled by his longing for his princess. With the woman of his dreams always beside him, he can think of nothing but her. Ume-Ko feels she has destroyed a divine gift.

Her husband was inspired to paint by his loneliness and longing. Ume-Ko is ready to sacrifice her life to ensure that his talents are restored…

The Dragon Painter is notable for its mostly Japanese cast, a rarity at the time. Sessue Hayakawa is his usual wonderful self in the lead. His early wild scenes are all right but his gifts really manifest themselves when he finds himself faced with losing his princess once more. Hayakawa dominates his scenes with intense close-ups, using his eyes to tell the story of his pain.

Hayakawa’s wife, Tsuru Aoki, is every bit his equal in talent. She has a fascinating face, full of character and she makes her challenging character believable. The concepts of self-sacrifice and balancing the cosmic scales are quite common in Japanese cinema (check out the wonderful Red Beard to see what I mean) but these characteristics had to be packaged and sold to an American audience. Aoki is a marvel. Her movements are subtle and she moves with great grace but she has a will of iron. Tatsu’s talent is more important than either one of them and her fierce determination to restore it is touching.

Toyo Fujita brings a light touch as the surveyor Uchida. He has an eye for talent but is not an artist himself and so is able to observe the artistic temperaments of Tatsu and Kano with great amusement. Fujita even manages to steal away a few scenes, no easy task with both Hayakawa and Aoki on the job.

The lone Caucasian actor in a major Japanese role, Edward Peil uses minimal makeup and does not stoop to the weird shuffling mannerisms and lip puckering that often mar such performances. While it would have been better to have an all-Japanese cast, I really have no complaints about Peil considering when and where this film was made. He is respectful and dignified.

Director William Worthington creates an elegant and sophisticated film. His compositions (particularly his extreme long shots) are gorgeous and his use of light and shadow is equal to DeMille and Tourneur. The film itself is a lovely thing, tinted and toned (at the same time in certain scenes).

The Dragon Painter was based on the 1909 novel of the same name by Mary McNeil Fenollosa. (The book is in the public domain and may be read online.) Fenollosa had lived in Japan and was married to Ernest Fenollosa, who was one of the most acclaimed authorities on Asian art and had been appointed official arts commissioner by the Emperor of Japan. It should come as no surprise that the story Fenollosa wrote would capture the ephemeral nature of creative inspiration and portray accurately the need for conflict in order for art to flourish.

In many ways, the lesson of the film is an eloquent defense for the art of silent film itself. The lack of his princess drives Tatsu to be far more creative than he could ever be otherwise. The lack of voices also forced silent film creators to come up with more innovative ways of telling their stories in a purely visual format.

On the narrative side of things, the story is lean, not an ounce of fat. It runs just under an hour in length but still manages to tell its story. Frankly, it’s quite refreshing for someone living in a time when even the thinnest plot is deemed worthy of a three hour+ film. Bring back the 55-minute feature! Or at least the 80-minute feature.

Viewers must answer this for themselves. Whatever you decide, you will probably agree that The Dragon Painter is a fascinating film on many levels. It subverts audience expectations of what a silent film should be, it treats its Japanese cast with nothing but respect, it contains strong performances from its leading couple and it tells an intriguing tale of artistic inspiration. In short, it’s wonderful.

Milestone has released The Dragon Painter on DVD along with the early Hayakawa/Aoki collaboration, The Wrath of the Gods. The movie is accompanied by a Japanese-themed score by Mark Izu. It is generally very good but occasionally makes use of annoying and inappropriate sound effects.