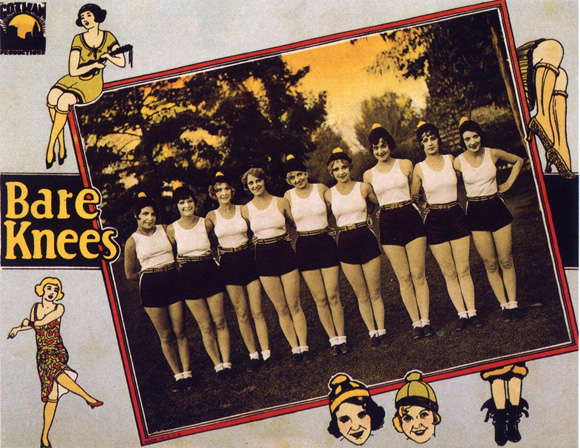 What do you do with a kid who just wants to have fun? Virginia Lee Corbin is a madcap, fast-driving, baseball-playing beauty (complete with bare knees, marcelled hair, makeup and lingerie) who gives her square sister fits with her wild, flapper ways. But which one is really wild? It does not get much more twenties than this!

God bless her. And dress her!

Some film genres are so much of their time that any attempt to make them in later periods would be ridiculous. They capture the zeitgeist and then disappear like a dream. The flapper movie genre was that kind of style. Hard-partying gals and the boys who loved them; perfect for the Roaring Twenties but the roar turned into a whimper with the economic collapse and soon flapper movies had gone the way of the dodo.

I suppose that it is almost impossible for someone who has not experienced the era to fully appreciate flapper films in context. The best we modern viewers can hope for is to watch the images move before us and bask in the faded shadows of another era.

But isn’t that what being a silent film fan is all about?

Meet Billie (Virginia Lee Corbin). She is a proud flapper, complete with beads, makeup and, of course, bare knees. Billie goes to live with her prudish sister, Jane (Jane Winton), and her equally prudish husband John (Forrest Stanley, last seen skulking through The Cat and the Canary). John is not only a prude, he is hopelessly unromantic.

John and Jane aren’t sure what to do with the jazz baby in their midst, especially when she starts to spread her hard partying ways to their staid little town. Soon, the women’s baseball team has traded in their bloomers for short shorts, Jane is considering wearing shorter skirts and Billie has the eye of every man in town.

The apple of Billie’s eye, however, is Larry (Donald Keith), an old-fashioned kinda guy who would like nothing more than to settle down into marriage with the young lady. Billie likes Larry too but she doesn’t feel the urgent need to marry. Too much life to live!

John continues to be appalled by Billie’s wild behavior and tries his best to block her from having the thrills and fun that she is seeking. What he doesn’t realize, though, is that patient, gentle Jane has had enough of his wet blanket attitude and she is preparing to leave him for his best friend, Paul (Johnnie Walker). Billie catches the eloping pair and realizes that for all her wildness, she is the better behaved of the two. But when John shows up unexpectedly, what will Billie do?

Bare Knees is, by all accounts, a fairly typical flapper picture. The basic plot of many of them is that flappers may act wild but they are old fashioned girls underneath it all. That’s all very well and good but by this time the formula seems a little threadbare.

That’s not to say that Bare Knees is not an amusing film. It is quite charming, mostly through the efforts of Miss Corbin, a former child actress who traded her pinafores for cloche caps and short skirts. While she does overact the coquette, she is thoroughly likable and her lively performance certainly makes her one of the more appealing screen flappers.

The rest of the cast is all right, if a little dull. In all fairness, though, Forrest Stanley’s cuckolded character was meant to be a bit of a noodle. Donald Keith has no such excuse. Clara Bow’s frequent co-star during her early days, Keith has always underwhelmed me and Bare Knees does nothing to change this impression. I am not entirely sure what Billie is supposed to see in his character.

Though the film suffers through a dull supporting cast and one of the more contrived endings I have seen lately, it is still a light and charming film. At just over an hour, it has a breezy pace and a pleasant atmosphere. Director Erle C. Kenton would go on to direct The Island of Lost Souls, a tale of mad science, vivisection and mutilation. Quite versatile, eh?

Bare Knees is a charming little period piece, a celluloid reminder of a world that was crumbling even as the film was being made. The terrible year of 1929 was just around the corner and soon the flapper would be gone forever. Except on film. She remains immortal there.

Grapevine Video has released a DVD of Bare Knees. It also features a short from the same year entitled Danger Ahead.

❧
Like what you’re reading? Please consider sponsoring me on Patreon. All patrons will get early previews of upcoming features, exclusive polls and other goodies.