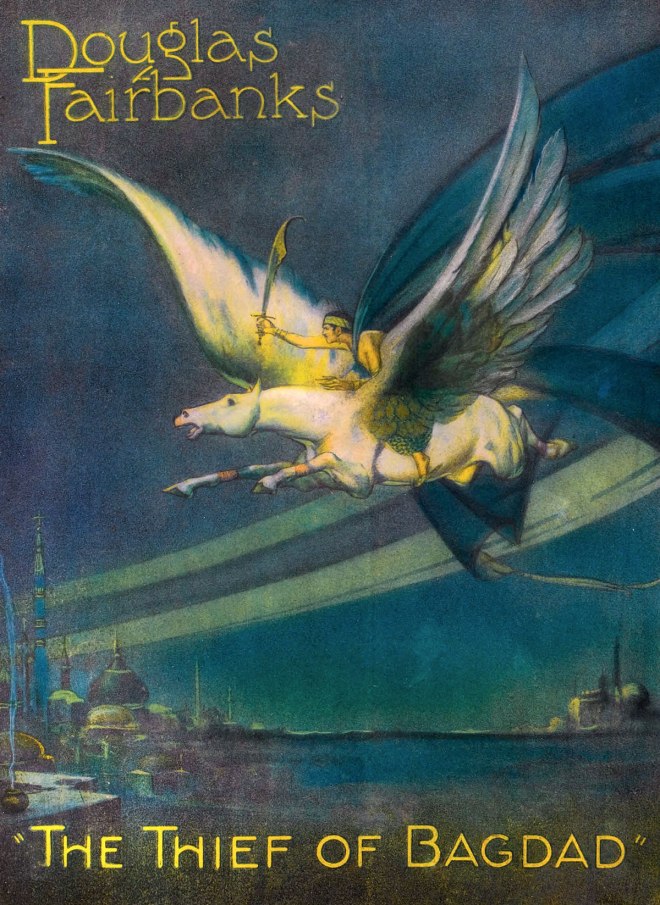 The Thief of Bagdad (1924) A Silent Film Review

Douglas Fairbanks is a spunky thief who uses his burglaring ways to win a princess, defeat the Mongols and generally save the day. Scenery, sets and costumes? Gorgeous. Pace? One may safely describe it as, er, stately. Pluses: An appearance from Anna May Wong and much Fairbanksian leaping.

Home Media Availability: Released on DVD, Blu-ray and via streaming.

Bonus: I will also be reviewing the 1940 talkie version starring Sabu and Conrad Veidt. Click here to skip to the talkie reviews.

Happiness must be earned. But a magic carpet sure helps.

Douglas Fairbanks is all about stunts in the minds of most movie fans. But in the 1920s, he also meant spectacle. After the rousing success of his gargantuan film version of Robin Hood, Fairbanks set about topping himself.

Writing under a pseudonym, Fairbanks himself devised the scenario for an Arabian Nights-style fantasy complete with magic carpets, flying horses, evil warlords and, naturally, a beautiful princess.

Fairbanks plays a street thief in Bagdad. Enraptured by his life of crime, the thief rejects religion, law and anything else that stands between him and what he wants. After a successful outing during which he manages to steal a magic rope, the thief and his associate (Snittz Edwards) decide to try for bigger game. The Princess of Bagdad (Julanne Johnston) is to be married and suitors have gathered from all over Asia in order to win her hand. That is sure to mean valuable gifts that can be snatched.

That night, the thief and his friend sneak into the palace. Once inside, the thief finds himself in the bedroom of the Princess herself. The thief is so enchanted by her that he forgets to steal anything at all except for her slipper.

The thief is in love and, like everything else he has ever wanted, he feels that the best way to get his way is to steal the object of his desire. Meanwhile, the Mongol Prince (Sojin) is conspiring to take Bagdad for himself. The marriage of the Princess has given him an idea. He will go and win her hand. Then he can claim the city easily for himself.

The Princess watches her suitors approach with dread. Each one is worse than the last. Then another man arrives. The thief has disguised himself as a prince in order to sneak into the palace. The Princess watches him from her balcony and knows that he is the one for her.

The thief, meanwhile, feels himself changing. He can’t bring himself to abduct the Princess. He must try to win her love fair and square. The Mongol Prince feels no such scruples and actively works to make sure that he is the one to claim the Princess.

That night, she officially chooses him to be her husband. But the Mongol Prince is not one to give up easily. He exposes the thief as an imposter. He is flogged and thrown out of the palace but not before he hears from the Princess that she loves him anyway. With her husband of choice gone, the Princess must choose again. In order to buy time, she sends her suitors on a quest for the most wonderful treasure in the land. Whoever can bring it to her will win her hand.

The thief hears of the quest and, aided by a friendly holy man (Charles Belcher), he sets off to find his own treasure.

But the Mongol Prince is not one to fight fair and he has a spy in the Princess’s inner circle (Anna May Wong). He means to win the Princess and the city no matter what.

Buried under a pile of glitz…

The Thief of Bagdad continued Fairbanks’s departure from the breezy adventure/comedies that had sustained him during his early career. While he still has the humor and the stunts that make all his movies enjoyable, there is a definite self-consciousness about the film.

From the high-falutin’ intertitles (“This is the meaning: Thou wilt wed the suitor who first toucheth the rose-tree in thy garden.”) to the gigantic sets, The Thief of Bagdad is all about pomp and ceremony.

What I miss is the old, hyper Douglas Fairbanks. At two and a half hours,The Thief of Bagdad has too much movie and not enough plot. An hour shaved off would have improved the film immensely.

Much of the time is spent lingering lovingly over the huge sets, which would have been tempting. They are big and beautiful. A sort of Roaring Twenties version of Arabian Nights as painted by Maxfield Parrish.

While The Thief of Bagdad is an amazing motion picture accomplishment and a feast for the eyes, the film is not my favorite Fairbanks picture. I prefer his more sprightly presence in The Mark of Zorro, where he is ably backed by the lovely Marguerite de la Motte.

The Thief of Bagdad is widely available on DVD, Blu-ray and via streaming. The recently-released Cohen version features an orchestral score by Carl Davis, which makes heavy use of Rimsky-Korsakov’s Scheherazade. The beautiful print and fantastic score makes this version the one I choose.

Ladies and gentlemen, in this corner we have Douglas Fairbanks’s big-budget blockbuster, The Thief of Bagdad. And in that corner we have the 1940 British remake.

Which Arabian Nights fantasy will be named champion?

The Talkie Challenger: The Thief of Bagdad

Life is pretty good for Ahmad (John Justin). He is the ruler of Bagdad, he has a loyal vizier who does most of the hard work and he has his every whim catered to.

At the urging of vizier Jaffar (Conrad Veidt, in color for the first and only time!), Ahmad disguises himself as a commoner to learn the thoughts of his people. What he learns is not pleasant. He is viewed as a despot.

Before Ahmad can get back to the palace, he is arrested by Jaffar’s men, accused of being a mad imposter and thrown into prison. No one believes his protestations that he is the real sultan. Fortunately, he is not alone for long. Abu (Sabu) is a young thief sentenced to death. He seems rather unconcerned at his fate but Ahmad soon sees why: Abu has stolen the key to their cell. Abu takes Ahmad under his wing and they escape together.

Ahmad is determined to take back his throne from Jaffar but his path leads him to the palace of a beautiful princess (June Duprez). Ahmad is smitten. So too was Jaffar. The Princess’s doddering old dad is more interested in toys than parenting.

Secretly a powerful sorcerer, Jaffar is bribing him with magical toys in order to win the Princess’s hand in marriage. Ahmad is not about to let that happen but before he can save the Princess, Jaffar blinds him and turns Abu into a dog. Jaffar lays a curse on them both: they will stay in their enchanted state until he holds the Princess in his arms.

Looks like the heroes could use a little magic of their own. And they find it, thanks to the special effects department. A genii, a magic carpet and a seeing stone are soon called into play in a desperate attempt to save the Princess from the requisite Fate Worse Than Death.

And the winner is…

While both films display the best special effects for their times, feature top-notch casts, as well as gorgeous sets and costumes, the 1940 version is the clear winner.

First, the talkie has better pacing. At a spry 106 minutes, it manages to fit in a more complicated plot than the silent version, which runs for a numbing 154 minutes. The time difference also makes the 1940 film much friendlier to younger viewers.

Second, the characters are more interesting. Douglas Fairbanks is a charming screen personality but his thief’s conversion from evil to good in 2.5 seconds is less than convincing. Sabu, on the other hand, is more of a mischeivous boy who is unfairly sentenced by the despotic Jaffar. A far more appealing character overall.

While the hero and heroine of the 1940 version are fairly wooden, their lack of pizzazz is more than made up for by the marvelous acting of Conrad Veidt.

Veidt often played so-called turban roles in his silent German career. See The Indian Tomb for an excellent example. It’s great to see him revive his old persona one last time. Veidt really has no rival for screen presence in the film except for the adorable Sabu. His cold ferocity blows his less-experienced co-stars (Justin and Duprez) off the screen. Veidt clearly understood that his role called for old school villainy and he played the part with Continental flair.

The only thing I can’t understand is why the Princess is so dead set against marrying him. Let’s see, capable ruler with magic powers or spoiled kid who needs to be led around by the hand…. Hmmm. Plus, it’s Conrad Veidt!

One last point, fans of a certain full-length animated feature may notice some similarities between names and characters, plot and even costumes. Whether or not the cartoon is a homage to or a copycat of Thief of Bagdad is, of course, a matter of opinion.

Availability: Released on DVD and Blu-ray.