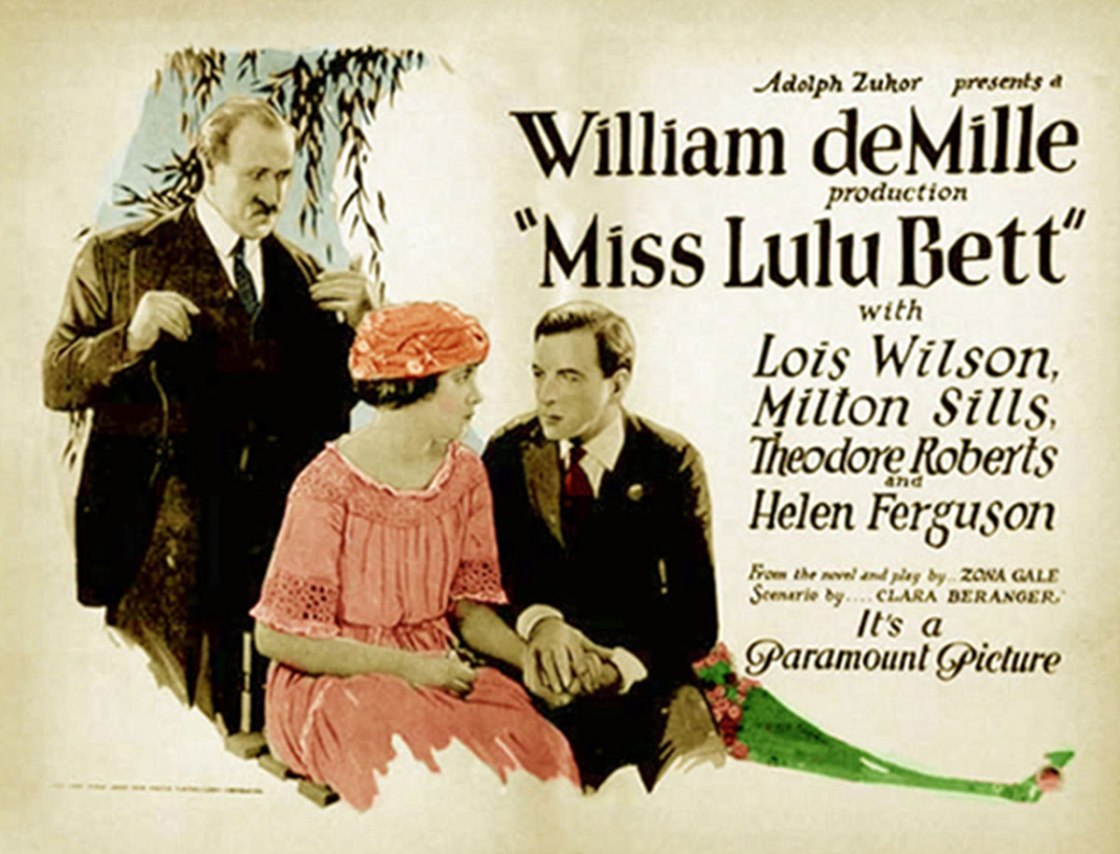 Lulu is a poor relation, sentenced to a lifetime of drudgery for the crime of spinsterhood. She jumps into a loveless marriage in order to escape her plight. It should have been an escape but it only makes matters worse and Lulu is forced to take matters into her own hands.

She’s young, single and independent. Clearly something is wrong with her.

The 1920s are rightly seen as the dawn of the modern age. However, society does not change overnight and Miss Lulu Bett features situations that have been trouble to mankind (or, should I say, womankind) for centuries.

Lulu (Lois Wilson) is that lowliest of creatures: the poor relation. Plain and repressed, she has no suitors. And a suitor-turned-husband is her only hope of escaping her situation. Lulu lives with her older sister, Ina (Mabel Van Buren) and her husband Dwight Deacon (Theodore Roberts).

The Deacons are a nice, middle-class middle-West family. At least on the surface. But Ina is a lazy mother who spoils her youngest daughter, Monona (Mae Giraci), and relies on Lulu for all the cooking and cleaning. Dwight is a blustering bully who hides verbal abuse under the excuse of cracking jokes. The teenage daughter of the house, Diana (Helen Ferguson), is often the butt of his taunts.

Lulu works all day and into the night cooking, cleaning and keeping the house running. One night while she is finishing her chores, she answers the door. It is Ninian Deacon (Clarence Burton), Dwight’s brother, who has been travelling the world and has finally come home.

Ninian is quite different from Dwight. He is attentive and polite to Lulu and doesn’t like the way she is being treated. Realizing that she never gets out of the house, he arranges for a dinner in the city for Lulu, Dwight and Ina. Before the night is over, Lulu has impulsively agreed to marry Ninian. She doesn’t love him but she is fond of him and she can’t stand her life at home any longer.

For a week after the marriage, Lulu’s life is blissful. Then Ninian makes a confession: he has been married before. His wife left him years ago and he thinks she is dead but he isn’t sure. He asks Lulu to take the chance and stay with him.

Lulu’s self-respect won’t allow it. With nowhere else to go, she returns home. The lesser of two humiliations.

The Deacon household is in chaos. The kitchen is filthy, Ina can’t cook to save her soul and the house is in chaos. The Deacons welcome back Lulu with open arms but Dwight forbids Lulu to say why she has left her husband. Lulu agrees to save the children from scandal. Of course, no one cares what this will do to Lulu.

But in saving Ninian’s reputation, Lulu has sacrificed her own. The town gossips whisper that Lulu was dumped by an unsatisfied husband. Everyone else just pities her as a grass widow.

Neil Cornish (Milton Sills), a schoolteacher, has admired Lulu’s hard work and gentle spirit for years but didn’t realize how much he liked her until she got married. Now he is determined to be a friend to her.

Lulu confides in Neil and he begins to court her although they both understand that she may still be married to Ninian. Dwight doesn’t approve of Lulu’s new beau but Lulu is not the same girl she was. She has tasted freedom and self-respect and she isn’t about to let herself get bullied again.

Audiences of the twenties enjoyed over-the-top romantic scenes: manhandling, passionate kisses and wild melodrama, sometimes hard for a modern viewer to get used to.

In contrast, the years have been kind to the love scenes in Miss Lulu Bett. Milton Sills and Lois Wilson project warm mutual admiration. Whether taking a drive or washing dishes together, their budding romance is sweet and believable.

Lois Wilson gives one of her best performances as Lulu. A real beauty who was often relegated to window dressing, William deMille brought out a depth of feeling and a purity of emotion. He encouraged her to take the initiative when faced with experienced scene-stealers like Theodore Roberts and Milton Sills.

Hollywood film of any era like to cast pretty actresses in plain roles. The actress then dons glasses and lets it go at that. (See how ugly she is? No? Well, just pretend) Miss Wilson and deMille made the courageous decision to make Lulu really plain. Minimal makeup, unflattering dresses, a stooping posture, the whole ball of wax. Then, as Lulu gains confidence, she becomes gradually prettier. It is a very satisfying technique.

As the character who starts all the trouble, it would have been tempting to turn Ninian Deacon into a villainous cad. Instead, he is presented as a likable character. Impulsive, certainly. Thoughtless, perhaps. But his regard for Lulu and his desire to help her is real.

In the end, the real villain of the film is a warped version of the American family. The Deacons are respected members of the community, even though Ina is a lazy housekeeper and Dwight is a cruel father.

One of the best scenes is where Lulu has finally had enough and snaps. She confronts Dwight and Ina with their hypocrisy, smashes dishes (“My work’s paid for these!”) and tells Ina to do her own dishes from now on.

Obviously, Miss Lulu Bett has a distinct feminist slant. When she first meets Ninian, Lulu asks if he is a Mrs. mister or a Miss mister. Women wear their marital status openly, men can hid theirs at will. Further, an unmarried woman is seen as unwanted goods after a certain point while an unmarried man is seen as an incorrigible but charming bachelor.

Ninian was able to travel away from his family. Lulu is a woman and must stay home working as a drudge. Spinsterhood is a sin punishable by indentured servitude.

When the traditional escape from such a situation (marry someone, anyone) makes matters worse, Lulu takes the remedy into her own hands. Too often, empowered female characters are required to be violent in order to demonstrate their independence. Lulu is not seeking revenge. She is not an assassin, a superhero, a femme fatale or any of the other violent tropes that often pass themselves off as empowered female characters. Lulu is a grown woman who wants to be treating with dignity and respect. She is a real person with real needs.

The film also exposes the hypocrisy in American culture. The repressed, put-upon Lulu is viewed as a good woman. The more assertive, prettier Lulu is a threat. Further, when she returns home without a husband, everyone assumes that she must be the one at fault. (“If a feller leaves his bride after one week, it don’t say much for the bride.”)

In the end, Lulu finds happiness by standing up for herself and going after what she wants: handsome schoolteacher Neil Cornish. And this time, she isn’t entering into a relationship because of social pressure or out of gratitude for some kind of paternalistic rescue. Lulu ends up with Neil because they enjoy each other’s company and they make each other happy. This relationship is Lulu’s choice from start to finish.

What could be more empowering?

Miss Lulu Bett, like its heroine, is an unpretentious and surprisingly deep. It is one of the few William deMille films that is available to the public. Take advantage of it.

Miss Lulu Bett was available on DVD by Image, paired with Cecil B. DeMille delightful marital comedy, Why Change Your Wife. Sadly, this disc seems to be out of print. Fortunately, Grapevine recently released Miss Lulu Bett on DVD and Bluray and the quality is excellent.