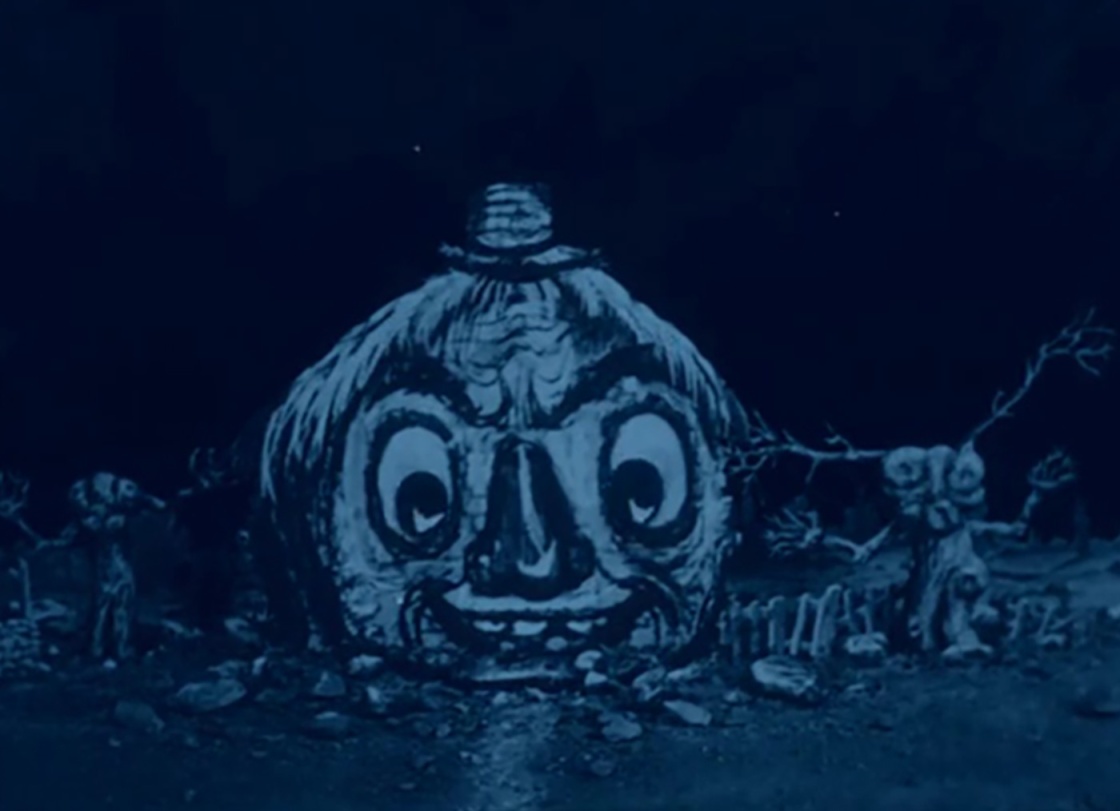 An influential and wildly creative blend of multiple animation techniques, miniatures, puppetry and live-action, this Vitagraph production is a variation on the popular “my hotel room is very strange” genre of early film.

Life Hack: Don’t Stay in a Hotel with Eyes

In the world of early animation, The Haunted Hotel is one of the greats, even though it is technically mostly live action. It didn’t pioneer any of the special effects used but it used so many different techniques in fascinating combination—all this and a surprise ending too! Vitagraph’s J. Stuart Blackton truly outdid himself.

(Spoilers, I guess. The film is only five minutes long but I will be discussing all of it.)

The film begins with an exterior shot of the hotel and it is a dark and stormy night. There are animated lightning bolts and the hotel’s doors and windows twist and twirl (likely accomplished with magnets) before the building morphs into a more traditionally animated face.

A traveler arrives inside and things immediately go awry when his gloves come to life and try to run away. (Blackton would use a similar sequence in The Thieving Hand.) His other belongings begin to disappear but then the innkeeper enters with dinner. The dinner sequence involves multiple animation techniques to show the meal making itself, with the help of a tiny living doll.

As you can tell, this picture was an absolute trip! Vitagraph films of this era are an almost uninterrupted string of delights and The Haunted Hotel is no exception. J. Stuart Blackton’s zany and somewhat twisted humor takes a simple concept and turns it into something truly special.

The set piece of the film is the meal preparation scene and Blackton pulled out all the stops. There’s a bit of stop motion animation, particularly when the doll takes part in the preparation, but the scene also seems to incorporate string puppetry and something as simple as a peg on the back of the coffee pot so that it can be poured by an invisible hand. These multiple techniques not only add richness to the scenes, they also keep modern viewers guessing because just when they’ve figured out one special effect, another pops onto the screen for them to discover.

The Haunted Hotel was an international smash for Vitagraph. At the time, prints were sold outright rather than leased and we don’t have box office data in terms of ticket sales, so the number of copies Vitagraph shipped is the best way to measure success. A bomb might sell five copies. Edwin S. Porter’s delightful spoof The Little Train Robbery (1905) was a box office failure with thirty copies sold, whereas his 1906 hit Dream of a Rarebit Fiend sold over 190 copies, Edison’s big hit of that year. The Haunted Hotel sold 150 prints in Europe alone.

These numbers may seem small but remember that there was a bustling trade for secondhand prints and one copy might be used by hundreds of theaters if the production was in high enough demand. The fact that as many as 150 copies had to be exported shows us that the demand was immediate and immense.

The technology is fascinating, of course, but Vitagraph trick films continue to be early film favorites because of their cheeky humor. When The Haunted Hotel was released, comedy and horror were like peanut butter and jelly in cinema and the goal was to produce chills and laughs in equal measure. This is certainly the funniest entry in a forgotten genre of early film. Yes, the haunted hotel was not just a film, it was an entire trend.

In Cine Goes to Town, film historian Richard Abel points out that haunted inn/hotel acts were popular on stage and in music halls and this is reflected in motion pictures, which drew much inspiration from the stage—with a twist. Georges Méliès released The Bewitched Inn in 1897, which is a simpler version of the act. A weary traveler is shocked when his belongings and even the furniture appears and disappears via substitution splices. The inn’s foreign location is hinted at by the traveler’s pith helmet and safari suit.

The motion picture now known as Uncle Josh and a Spooky Hotel (1900) was released by the Edison company as part of their ongoing humorous bumpkin series. In the film, another weary traveler tries to stay the night at an inn and is warned about a ghost appearing at midnight. Appear it does and plays practical jokes, appearing and disappearing, before sitting down beside the traveler. The surviving film cuts out at this point but the original print apparently ended with the traveler fleeing.

The research of the Library of Congress raises doubts about its origin and the AFI speculates that it could have been a production of Méliès or R.W. Paul. If we have a choice between the two, I do not believe the film was made by Méliès as the painted backgrounds lack his polish and no performer resembles him. (Méliès was very much the writer-director-producer-star.) I’m not entirely confident that this was a Paul production either, but the humor does have a British feel to it. Stan Laurel later used a very similar gag and ghost costume in A Chump at Oxford, so this might have been a filmed music hall routine. If you have another theory, do let me know.

Finally, in our list of genre comparisons, the 1896 Méliès film The Haunted Castle overtly showed uncanny creatures up to no good and leaned into the horror imagery. It’s easy to see how all of these hauntings and horrors merged together to inspire The Haunted Hotel.

It’s also worth noting that early filmmakers could and would sincerely frighten their audience, they just generally preferred to do so with non-supernatural means. The home invasion robbery was a wildly popular trope with The Physician of the Castle (1908) and Suspense (1913) being notable examples. In both cases, women and children are threatened by violent burglars while their husbands learn of their plight via telephone and race to the rescue, happy ending not guaranteed.

While it can be seen as an important building block of horror, The Haunted Hotel wasn’t out for genuine terror. It aimed to enchant and amuse and it still does. It is a delightful experiment that also holds up as an entertaining motion picture. Its reputation is deserved and it comes highly recommended.

Released on DVD and Bluray as part of the Halloween Haunts collection. Score by Robert Israel.