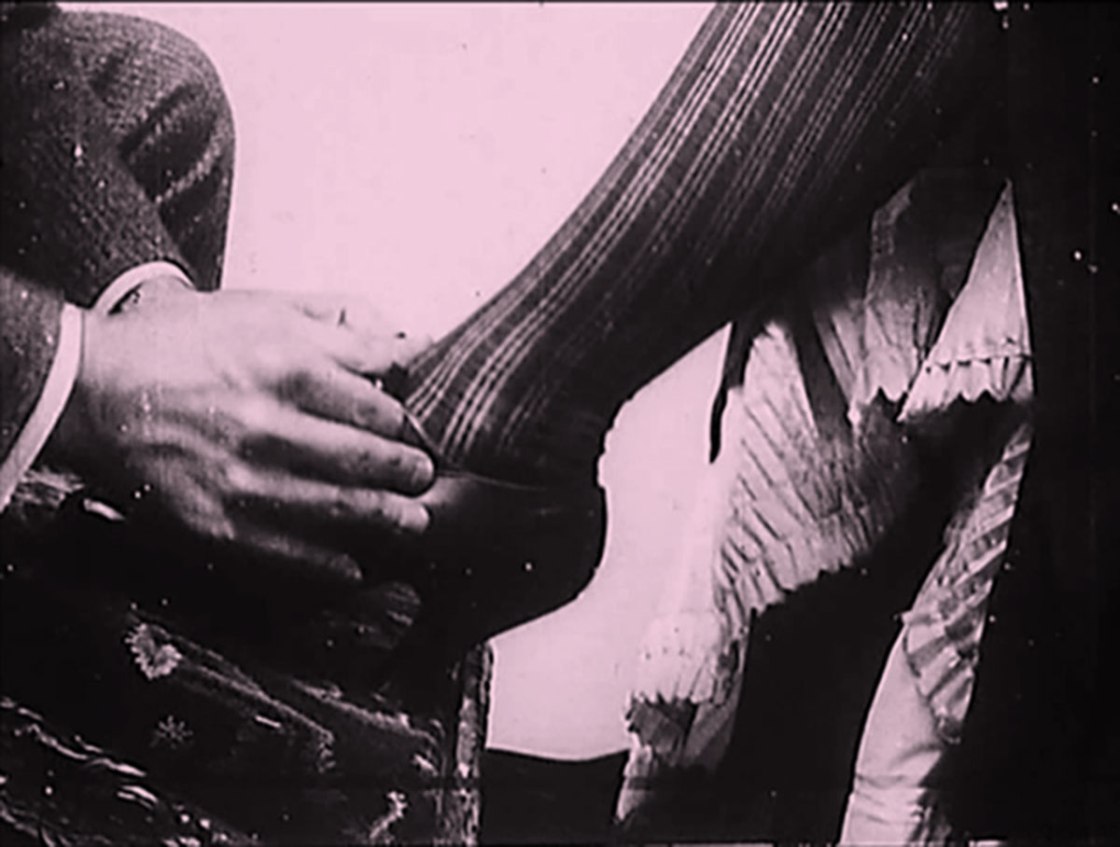 A shoe clerk gets a little frisky with a very willing customer in this Edison comedy. Simple and short but it does include some early editing and is an example of the popular voyeuristic humor of the period.

Home Media Availability: Stream for free courtesy of the NFPF.

Before we get started, we should probably get one thing out of the way. The title of this film is a classic example of definitions shifting over time. As Scott Simmon states in his description of the film, “Of course, at that time “gay” referred only to his devil-may-care impetuousness. The modern meaning gives unintended irony to The Gay Shoe Clerk, whose “young woman” was played by one of Edison’s male employees.” So, now that we’ve clarified, let’s get this show on the road.

The Gay Shoe Clerk was directed by Edwin S. Porter for the Edison film company in 1903 but has been overshadowed by the director’s legendary hit, The Great Train Robbery, released the same year. It’s a light, voyeuristic three-shot comedy about a shoe clerk who is granted a peep at a client’s ankle and calf while fitting her for shoes. He is then permitted a kiss before the young woman’s chaperone violently punishes the clerk for his audacity.

From a technical perspective, the main subject of interest is the insert closeup of the woman’s ankle. Closeups are considerably older than many people realize and were being used for narrative, humor and titillation during this period. (There’s some scholarly debate as to whether the shot in The Gay Shoe Clerk is narrative or an attraction meant merely to showcase the ankle. I’m kind of in the “Why not both?” camp.)

British filmmaker George Albert Smith is responsible for some particularly fine early examples of the insert closeup, such as The Sick Kitten (1903) and As Seen Through a Telescope (1900), the latter of which also features a woman’s ankle as a shoe is tied in place.

However, I should mention that both The Sick Kitten and The Gay Shoe Clerk use the closeup in a more modern manner as they do not require the motivation of a telescope or magnifying glass or anything else as an excuse to bring the viewer in for a closer look. It could be argued that The Gay Shoe Clerk’s closeup is a point-of-view shot but it does not align with the clerk’s line of sight and is clearly present for the benefit of the audience. (You can see an excellent example of multiple interpolated closeups in Smith’s comedy Mary Jane’s Mishap, which was made a bit before The Gay Shoe Clerk.)

Both The Gay Shoe Clerk and As Seen Through a Telescope give the viewer a good look at the lower part of a woman’s leg but just how shocking would this have been in the western world of the early 1900s? While women’s skirts did extend to the floor in many cases, the sight of an ankle onscreen would not have been completely outside the bounds of propriety. (Though more censorious minded citizens objected to wilder films and it is always a mistake to assume that our forebears were of one mind on any subject.)

Newspapers of the time are full of articles that showcased the female ankle in both photographic and drawn forms, usually under the guise of showcasing exercise or fitness. The Saint Paul Globe printed two articles in rapid succession that showcased how to keep one’s boot heels from wearing down. The pieces were lavishly illustrated with photos of women with hitched skirts. For science, apparently.

Of course, it’s all in the presentation and The Gay Shoe Clerk treats both the peep at the ankle and the kiss as forbidden fruit. It’s a sterling example of the male gaze in early film, a period dominated by men with the notable exception of Alice Guy.

To that end, peepshow and naughtier fare was a staple of cinema and a bestseller for the Edison film company. Annabelle’s ankle-revealing dances were among the studio’s first projected hits and set the tone for what was to come. Porter’s 1901 film, What Happened on Twenty-third Street, New York City, is an ersatz Candid Camera affair in which a young woman walks over a sidewalk grate and her skirts blow up to her knees, revealing calves and ankles alike in a manner usually associated with Marilyn Monroe. (It’s possible that the young lady was played by a male Edison employee in drag, as was the case in The Gay Shoe Clerk.)

The even earlier Edison film, 1897’s What Demoralized the Barbershop, portrays a tonsorial establishment descending into chaos when the sidewalk-level window reveals two women with their skirts lifted, showing off boldly striped stockings. The only surviving copy of the film is a paper print, so not a lot of detail is visible but it seems to be even more revealing than What Happened on Twenty-third Street with the entire knee and part of the thigh revealed for an extended period.

Voyeurism could also take the form of keyhole peeping with the scene featuring a lock-shaped frame. The 1897 film Peeping Tom (apparently lost) possibly featured this device but we can see an early example in the surviving 1901 Ferdinand Zecca film What is Seen Through the Keyhole (which is often mislabeled as Peeping Tom). The tradition was carried into the feature era and you can see an example of it played for laughs in Cecil B. DeMille’s Male and Female.

By the way, despite many assurances that a film expressly called What the Butler Saw was released in the late-1890s or early 1900s, I have yet to find a specific date or production company attached to it, let alone the film itself. I also cannot find evidence that the term “What the Butler Saw Machines” was in general international use in reference to Mutoscopes. (For what it’s worth, the more reliable sources make clear that the term was used in reference to British machines only, if it was used at all.)

In The Emergence of Cinema, Charles Musser points out that the violent punishment that the clerk endures at the end of The Gay Shoe Clerk would have been an added source of pleasure to the spectator, who, after all, managed to get a good look from the safety of their theater seat.

In addition to its voyeurism, The Gay Shoe Clerk combines several popular plots in early film: the clandestine flirtation, the kiss and the slapstick beating. A young couple just trying to steal a little sugar only to be met with a violent guardian was hardly an invention of the cinema but these plots were easy to communicate visually and were therefore popular.

You can see another example of this in the gloriously-titled 1900 comedy Maud’s Naughty Little Brother, or Wouldn’t it Jar You? / Wouldn’t it Jar You? In that film, the illicit couple’s date is done in by a child’s practical joke. A later example can be seen in the 1913 Russian comedy The House in Kolomna, based on a poem by Pushkin. Musser writes in Before the Nickelodeon that The Gay Shoe Clerk itself was inspired by similar films, Don’t Get Gay with Your Manicure (1902), in addition to As Seen Through a Telescope.

The Gay Shoe Clerk is extremely typical of its era and provides us with a small preview of the more complex storytelling that was to come. Just three years later, Australia would release the earliest known narrative feature film, The Story of the Kelly Gang. It was a dynamic and exciting era in film and The Gay Shoe Clerk is a fine example of a typical popular comedy.

Watch it for free courtesy of the NFPF. It includes a charming piano score by Martin Marks.