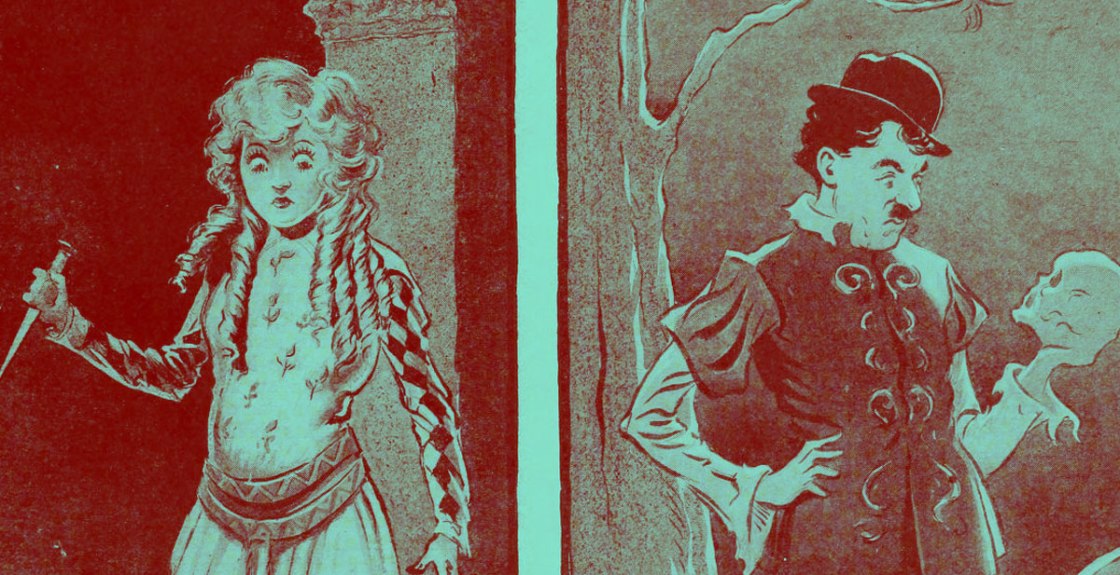 Photoplay Magazine published a brief series showcasing the top stars of the day in what they considered to be wildly inappropriate roles, calling it “Photoplays We Don’t Care to See.” The illustrations by Norman Anthony are incredibly charming and I am afraid that the series had the opposite effect on me: I do very much care to see these imaginary pictures!

Mary Miles Minter was considered one of the top contenders for Mary Pickford’s sweetheart roles and so she would be an odd choice for Lady Macbeth… OR WOULD SHE? Those innocent blue eyes could have been turned sinister by the Scottish play and given her prominent place in the William Desmond Taylor murder just a few years later, this would have been a casting choice for the ages.

It’s safe to say that, like many other comedic superstars, Chaplin had more dramatic ambitions and why not Hamlet? Shave off the mustache, don some black tights and let’s go, Charlie! I’d watch.

Marion Davies actually played the role of Cecilia in a now-lost picture a few years before. I realize that Theda Bara is famous for her vamping but she did actually take a stab at more innocent fare with titles like East Lynne.

William S. Hart was known for his westerns, true, but the role of the famed Regency dandy Beau Brummel would not be entirely alien to him. Remember, Hart donned bracelets and a very short skirt to play Messala in the stage version of Ben-Hur.

I had to look this one up and it’s apparently about a father who kidnaps his daughter during a custody dispute and dedicates his life to making her happy. I really don’t see that as too far out of Douglas Fairbanks’ wheelhouse, just toss in some jumping scenes and we’re in business.

At this point in her career, Mary Pickford was trying her hardest to break free of typecasting and her dream role was Marguerite in Faust. While I would like to see an Egyptian woman play Cleopatra, I see no reason why a role of this type (tragic queen) should be out of Pickford’s range.

This series featured cute illustrations but it also showcased the kind of narrow-minded typecasting that hamstrung many a career. In fact, I dare say that the series should have been renamed “Photoplays We Would Love to See” because any one of these productions would certainly get my money.

You can look up lots of swell clippings like these at the Media History Digital Library.