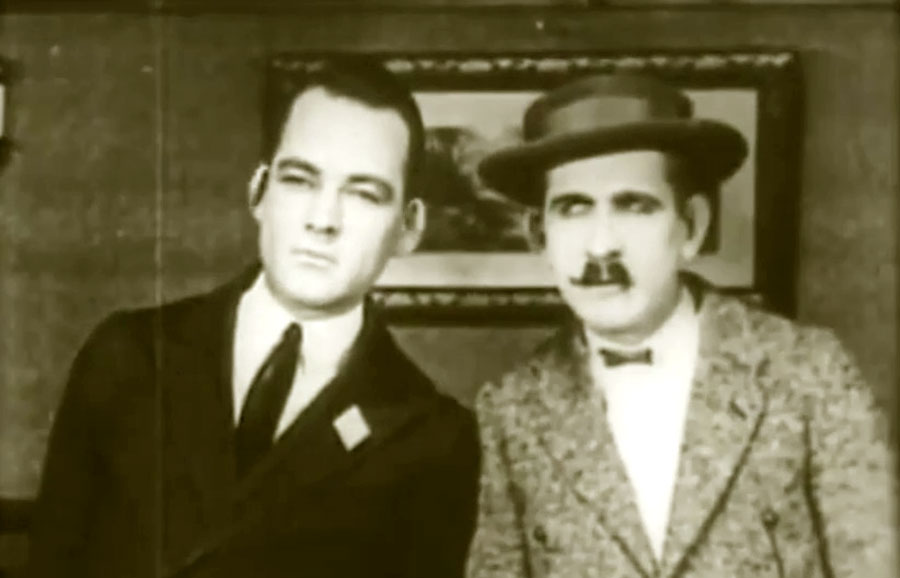 James Parrott is a fire extinguisher salesman who needs to join a secret society in order to sell one of his advanced extinguishers. (It’s a long story.) The initiation is, well, a bit fiery… Jobyna Ralston is on hand as the leading lady who dreams of trombone-playing stardom.

Home Media Availability: Released on DVD by Looser Than Loose.

Charley Chase (né Parrott) is one of my all time favorite comedians but today’s film is a vehicle for his brother, James Parrott. Like most fans of classic comedy I was used to seeing Parrott’s name in a behind-the-camera capacity such as writer or director. However, he had a decent run as a comedy star in his own right before disappearing behind the camera to direct classics like Blotto, Brats, Twice Two and The Music Box.

The hilarious title of this short is a play on the film Are Parents People?, a divorce dramedy and a vehicle for Betty Bronson released earlier in 1925. While some spoof names equaled a spoof of the film too (Dr. Pyckle and Mr. Pryde did indeed poke fun at Jekyll and Hyde), in most cases it was simply a case of needing a punny and/or zany title for a comedy short and no direct correlation was expected or delivered.

This comedy centers around two popular cultural elements of the 1920s: secret societies and traveling salesmen. Salesmen were not new in that decade, of course, but trains and automobiles gave them added flexibility and the rising consumer culture meant that there was always something new to sell.

In this case, a new kind of fire extinguisher. Parrott (billed as “Jimmie Parrott”) plays a salesmen whose product is a new fire extinguisher shaped like a trombone. In order to demonstrate its powers, he carries an atomizer filled with gasoline and a box of matches.

His target is Mr. Smith, a businessman who has hired six secretaries tasked with keeping salesmen out of his office. Fortunately, our intrepid salesman has a way around that particular obstacles: everyone and their brother was a lodge brother belonging to some secret society or other and so he has joined all of them.

Unfortunately, Smith himself is a spendthrift but he is also a pyromaniac and isn’t inclined to purchase an extinguisher. The only way he will buy one is if Parrott is a member of his lodge, the Shiners. And wouldn’t you know it, it’s the only one he didn’t join.

Oh, and meanwhile, Smith’s daughter (Jobyna Ralston) longs to play the trombone but asks the music salesman to persuade her father to allow her to have the instrument. I cannot see issues arising from a musical instrument and a fire extinguisher sitting in identical cases.

Fraternal lodges and secret societies were big in the 1920s and inspired their share of comedies before and after that decade. Who doesn’t love Sons of the Desert? The Shiners is a play on the Shriners, of course, a Freemason-adjacent fraternity that is famous today for its charitable children’s hospitals and itsy-bitsy cars driven in parades.

Secret societies have an oath of allegiance and many have initiation rites that tip over into the bizarre and grisly and this is where the comedic opportunity is to be found. The audience is often invited in on the fun by showing the trickery behind the terror and there’s slapstick aplenty as the initiates are smacked, thwacked and generally abused by their would-be lodge brothers.

However, given the real world perils of hazing, it seems that this title card has more truth than comedy in it:

While not quite as distinct or effortlessly zany as his brother, Parrott is a funny fellow on the screen. His persona in this film is a trickster trying to get by on his wits… such as they are. And because he doesn’t look like the troublemaking sort, when he pulls out that atomizer of gasoline he brings down the house.

While researching this review, I saw a few instances of Parrott being confused with Charley Chase in trade magazines. I also found a rather curious Illinois theater proprietor named Earl J. Williams who was obsessed with killing the comedy one-reeler and wrote in to the Exhibitors Herald to declare each and every one-reel release, including Are Parents Pickles?, to be “poor” and “bunk” and advised theaters and audiences to avoid them.

With all due respect to Earl J. Williams, I liked this film! The Exhibitors Trade Review hits the nail squarely on the head in its coverage of the picture. “Although the plot is thin, there is sufficient comedy and continuity to hold their interest… Jobyna Ralston hasn’t much of a part, but makes the most of it.”

You may note that continuity is listed as a plus. This may seem obvious but you wouldn’t believe some of the painful, disjointed slapstick shorts that were being released at the time. (Glares at Mack Sennett.) So, yes, the magazine was absolutely correct to point out this particular quality.

Jobyna Ralston was already the designated Harold Lloyd leading lady in classics like Girl Shy, The Freshman and The Kid Brother and so it’s a bit frustrating to see her so underused here. Ralston does fine but this is very much a “girl” part (quite literally in the title cards) and, as the review states, she isn’t given much to do besides react to the mayhem that surrounds her.

Still, this picture provided a few solid belly laughs in its short runtime and so I cannot complain. It’s a perfectly solid little one-reeler that should please Hal Roach fans enormously. If you have about ten minutes, give it a shot.

Included in the four-disc set The Brothers Parrott released by Looser Than Loose. The company went dark for a time but is now back up and running, which is great news because they were one of the few sources for these Hal Roach rarities.