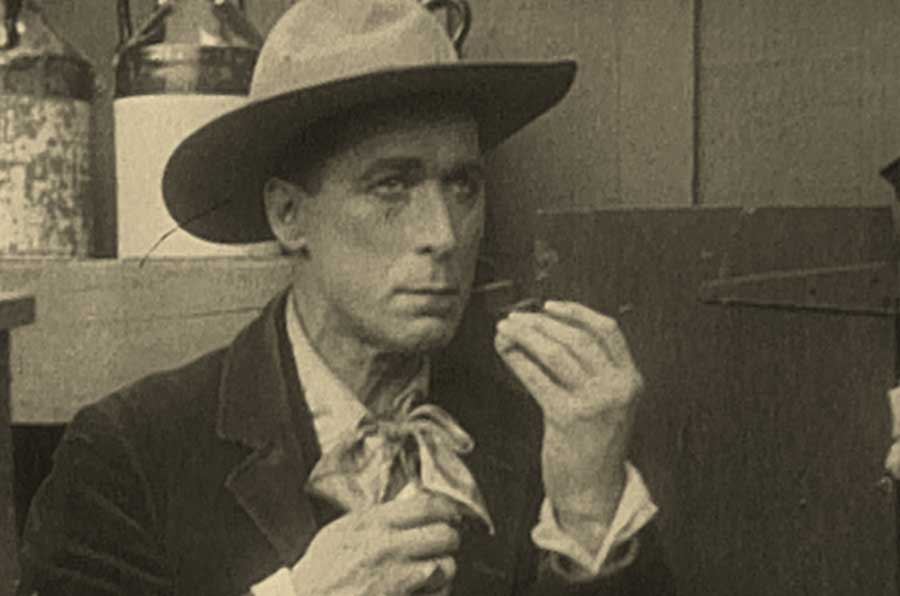 Know when to hold ‘em and when to fold ‘em.

Even after he made his feature debut, William S. Hart continued to make dramatic western shorts under the stewardship of producer Thomas Ince. Mr. Silent Haskins was originally released as a two-reeler but was subsequently re-titled and re-released as The Marked Deck, Dealing for Daisy, His Royal Flush and Man Against Man.

This tactic of re-titling old releases irritated theater owners no end as it was easy to accidentally book an older film thinking it was a new one. It also makes things a bit confusing for anyone researching the period because one film could have a half dozen names.

The version that I saw seems to have been some kind of home release print (the typeface looks very post-1910s to me) and it was cut down from two reels to one. Further, the heroine’s name is changed from Priscilla to Daisy in order to make the Dealing for Daisy title work.

Unlike other Hart short films of the period that were either tragic or dramatic (Bad Buck of Santa Ynez, Keno Bates Liar, The Taking of Luke McVane), Mr. Silent Haskins is light as a feather and cute as a bug’s ear. Now obviously my favorite Hart flavor is “I’m shootin’ straight tonight an’ I’m plum willin’ to kill” but in second place is funny Hart. Did you know he could be funny?

Hart’s first feature, The Bargain, was a droll action-comedy and some of his short films, including this one, also took things in a humorous direction. Hart grew more sentimental and self-indulgent in his later pictures but even Travelin’ On, Hart’s only feature release of 1922 and one of his four final star vehicles, involved antics with a monkey and some very imaginative swearing title cards.

The setup for Mr. Silent Haskins: Priscilla Miller (Rhea Mitchell) is a straitlaced young lady who has come west to claim her inheritance, her uncle’s business. When she arrives, she discovers that the business is the local den of sin and vice complete with gambling and dancers in black stockings. Pearls clutched!

Haskins (Hart) seems to have been her uncle’s business partner (the synopses and the titles do not really make this clear) and he is immediately smitten by Priscilla. (Hart’s characters always fell in love at the drop of a hat, any hat.) When she demands that the place be closed immediately, he makes sure that it happens. He stalks around pummeling anyone who fails to respect her and generally seems to be auditioning for the role of bodyguard.

It’s possible that the saloon and dance hall is merely what it says on the sign but then we cut to a scene of one of the dancers frolicking on a table and revealing her (whispers) kneecaps, so this can be read as a considerably wilder establishment than the title cards are admitting.

The idea of inheriting a harem, brothel or set of multiple wives has been around for some time. His Uncle’s Wives, a 1913 Thanhouser comedy, pretty much has its entire plot in the title and Queen Kelly quite infamously went into detail when Gloria Swanson’s character became a madam by inheritance.

The townspeople of Mr. Silent Haskins decide that it’s unsuitable for a young unmarried woman to run the dance hall (or “dance hall”) on her own and so they offer her Jim Black (J. Barney Sherry) as a husband. However, Haskins has already fallen for Priscilla (bear with me, this was originally just a two-reeler) and challenges Black to a game of cards, winner gets Priscilla and loser leaves town.

I do love a good game of poker and it’s easy to see why it’s the most popular form of cinematic gambling. Slot machines? They’re okay but it’s a bit too fast and it’s player against machine. Roulette and blackjack? Better but it’s still more the player against the house than against another player. (Which can work well depending on the plot.) Gin Rummy is better for comedy because it’s so darn fast. Baccarat? If you’re Bond, James Bond, I suppose. Bridge? Not unless you honk horns and play the harp. Poker is short but not too short, it’s nasty, personal and most viewers have at least a passing familiarity with the rules.

(I’ve been playing poker since I was seven or thereabouts courtesy of a Commodore 64 video game. The parents of my friends were always a bit shocked when a wee girl proposed a nice game of Seven Card Stud instead of Go Fish. Casino card games are the best games.)

The direction of the poker scene is impressive for all the classic movie poker game elements that are present. In fact, if the scene were shot today, there would be relatively few changes needed. We have the antagonist with his pretty good hand, we don’t see what the hero has. A round of betting with neither man folding. What does Haskins have in his hand? Is it good enough?

As it turns out, a straight flush beats four of a kind and Haskins emerges the winner. And this is where the one-reel cutdown diverges from the original two-reeler. Haskins doesn’t say anything to Priscilla about his win in the original version and so she leaves him a note telling him that he missed out and departs for the east. Haskins chases her down, takes her from the stagecoach and confesses his love.

In the one-reeler, Haskins immediately tells Priscilla about his victory at the card table and she is delighted. To me, this is actually the stronger ending. I always find plots that are stretched out by characters not spitting something out to be a bit tedious and this cuts through all of that. Also, it gives Priscilla more agency as the reading I take away is that she was fine with Haskins using the card game to chase off Black. This embrace of “sinful” gambling also indicates that Priscilla is on her way to becoming a saloon proprietress with Haskins as her enforcer. I wouldn’t mind looking in on these characters a few years later.

Mr. Silent Haskins is just a little trifle but it’s a fun one and I am always up for a western comedy. I wish Hart had done more comedy during his career because he had a knack for it. It’s even more impressive considering that he was directing himself. (Many great comedians directed themselves but when things go wrong there, they go really wrong.)

The direction is relatively by the numbers with one incredibly awkward pan near the middle of the film due to poor staging. (If one performer is significantly shorter than the others and all are standing, a horizontal pan is impossible. Having the taller players seated or placing the shorter performer on a staircase would have solved this problem.) However, the excellent poker scene more than makes up for any flaws earlier in the picture. In any case, it’s pretty impressive that this same team made Hell’s Hinges just a year later.

The story is credited to Thomas Ince and G. Gardner Sullivan, though I do take Ince’s participation with a grain of salt considering his general tendency to slap his name on everything. Sullivan was responsible for writing or co-writing the stories of Hart classics like Hell’s Hinges and The Return of Draw Egan, as well as Ince specials like Civilization, The Wrath of the Gods and The Soul of the Beast.

I thoroughly enjoyed myself with this picture and I think most Hart fans, western fans and maybe even people who aren’t too crazy about either will have a good time too.

The one-reel cutdown is available on DVD from Grapevine. The two-reel version apparently survives but is not yet available on home media.