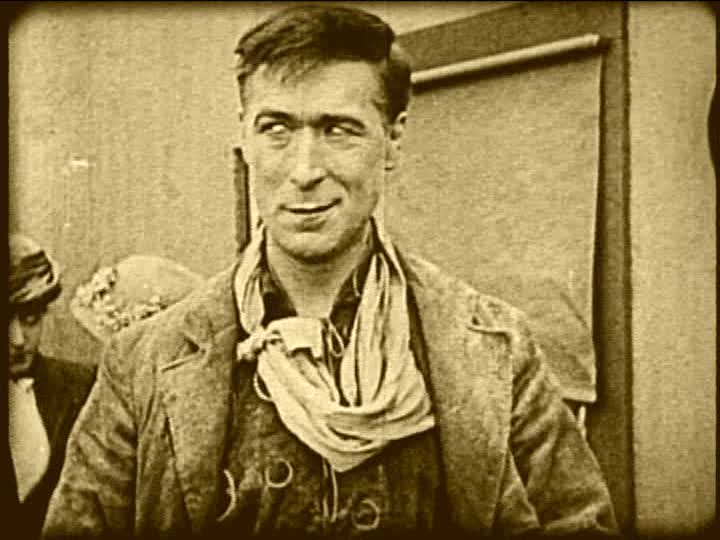 The Return of Draw Egan (1916) A Silent Film Review

William S. Hart is in his comfort zone as an actor and director when he plays a rough, tough outlaw who takes the job of marshal on a lark and ends up falling for the town beauty (Margery Wilson, actress and director). Resident vamp Louise Glaum is on hand as the villainess and a good time is had by all.

William S. Hart is often accused of making the same picture over and over again. While this is an exaggeration, he did tend to reused certain plot elements. The bad guy going straight, the virginal heroine, the vengeful vamp… To be honest, I have never had a problem with Hart recycling his plots; the main thing that matters is how well the recycling works.

The Return of Draw Egan is one of Hart’s better films from 1916, though it pales in comparison to the fiery Hell’s Hinges. It has a tight plot, a vampy Louise Glaum and Hart has nice chemistry with Margery Wilson. Guess what else is significant about their pairing? Well, Wilson was also a director in the silent era. So, both romantic leads had stints behind the camera. That’s pretty cool, eh?

Hart plays Draw Egan, a bandit leader who narrowly escapes the long arm of the law thanks to some quick thinking and a secret trap door. His partner in crime, Arizona Joe (Robert McKim), is not so fortunate and is arrested.

(By the way, this is one of those films with a title that sounds like a sequel but isn’t, kind of like Destry Rides Again. Where is Destry’s First Ride?)

Egan is on the lam when he gets a bit thirsty and it proves to be a fateful drink. Mat Buckton (J.P. Lockney) is one of the leading citizens of the nearby town of Yellow Dog, a nasty place full of dancehall girls, gunfighters and other western movie undesirables. Buckton is looking for a marshal who will be tough enough to lay down the law.

When Egan wallops a local bully, Buckton knows he has found his man. Egan thinks the whole thing is a huge joke and agrees to accompany him to Yellow Dog. The town is just as wild as promised with Poppy (Louise Glaum) leading the revelries. Egan is eager to join the fun but then he sees Buckton’s daughter, Myrtle (Margery Wilson). Smitten and eager to please her, Egan cleans up the town lickity-split.

Things are going great! Poppy has to keep the noise down, the saloon is closed on Sunday and Myrtle is falling for Egan. But then Arizona Joe escapes from prison and of all the whiskey joints in all the towns in all the world, he had to end up at Poppy’s place. Arizona Joe recognizes Egan and threatens to expose his past if he doesn’t back down.

Internal conflict! Will Egan call Arizona Joe’s bluff or will he be forced to leave his new life? Will Poppy’s new champion win the day? You’ll have to see The Return of Draw Egan to find out!

Any fan of William S. Hart has seen similar plots before but this film does have a few things to recommend it. First, Louise Glaum (in spite of her ridiculous costume) is given plenty to do in the vampish line. She snarls and sneers and smolders and it’s all great fun. Robert McKim, who played the baddie in The Mark of Zorro, is suitably hissable as the cowardly Arizona Joe.

Hart, who also directed, does let himself carry on a little bit in certain scenes but there are also some fun moments of table throwing, cigarette rolling and barroom brawls. His fans will not be disappointed.

Also, I have to admit that I am quite pleased with the climactic gunfight. (Mild spoilers follow.) A character takes cover behind water barrels because, as we all know, in Hollywood gunfights, concealment equals cover. Well, not in this movie. The character’s opponent shoots through the water barrel and kills him. Serves him right for not understanding ballistics.

Wilson’s most famous role was as Brown Eyes in the Huguenot section of D.W. Griffith’s Intolerance, which opened a month before The Return of Draw Egan. (The Huguenot and crucifixion sections are also known as the “Oh yeah, I forgot those were in there!” sections.) Wilson remembered that Griffith personally asked her to take the part, stating that it was created with her in mind. I’m not sure how to take that as her character was raped and murdered in the film and pretty graphically, I might add. Griffith had a thing. (Why yes, I do find D.W. Griffith to be skeezy and you couldn’t pay me enough to share a taxi with him. Brrrrrrrrrrr!)

Wilson’s performance is considerably more natural here, free of the affected hippity-skippity hop-hops and fluttering mannerisms that Griffith inflicted on his youthful female leads. It’s clear that Hart and Wilson have natural chemistry and he directs her well.

But what about her directing career? Wilson claimed to have directed four films (there is some debate as to the exact number) between 1920 and 1922. With the studio system coalescing, the door was closing for female directors in the silent era and so Wilson’s successful attempt to both direct and star in her own pictures is significant.

Not much is known about Wilson’s style or skill because all of the films she claims in her filmography are missing and presumed lost. We must simply speculate and hope that some collector has a copy of one of her films in their attic under a few reels of London After Midnight.

Wilson retired from films altogether after 1922 but kept her Hollywood connections working as a vocal coach, her services particularly in demand during the transition to sound. Wilson also found success as an author, writing popular books on charm, etiquette, spirituality and self-help into the 1970s. Her long and remarkable career is all but forgotten, which is pretty sad. She sounded fascinating.

The Return of Draw Egan was released on DVD by Grapevine. I do not recommend the Alpha edition as they have an annoying tendency to snip out scenes and title cards.