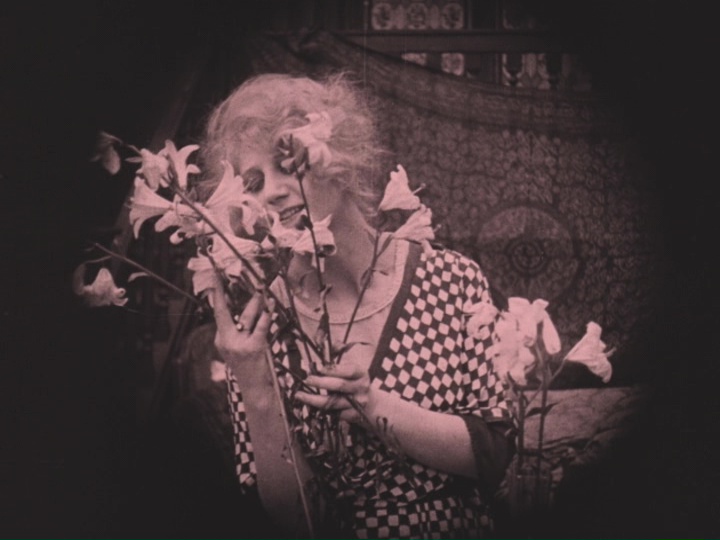 A May-December marriage is on the rocks when the husband, an anemic Egyptologist, decides that his young wife is stepping out. Poisoned cigarettes and a distastefully-placed mummy are just a few of the complications that ensue.

Domestic pictures and divorce dramas were among the most popular films of the silent feature film era and there are excellent examples from Cecil B. DeMille, William de Mille and Lois Weber. However, for my money, I enjoy the darker imagination of French director and feminist Germaine Dulac.

La Cigarette is the earliest surviving picture of Dulac and while on the surface it follows the standard pattern of a domestic farce (couple separates literally or emotionally due to misunderstanding and spends the rest of the film putting Humpty Dumpty back together again), there is something darker dancing just below the surface.

Dulac is probably most famous for the surrealist film The Seashell and the Clergyman but both La Cigarette and The Smiling Madame Beudet showcase her versatility and talent for creating humor and sadness out of the marital problems of the well-to-do.

Both films introduce us to a mismatched couple. In The Smiling Madame Beudet, it is a sensitive and intelligent woman married to a boor. In La Cigarette, it is a fussy and neurotic Egyptologist in his fifth decade married to a spirited woman in her twenties. (I should emphasize that while movies often featured and still feature foxy grandpas with pretty granddaughter-wives, the average age difference between spouses and partners in the real world has remained remarkably steady: generally just a few years.)

Pierre Guérande (Gabriel Signoret) spends his days studying mummies and their history and soon becomes obsessed with the preserved remains of a flirtatious princess. It seems that her older husband despaired of winning her back from her young lover and so tried to kill himself with a poison cake. He succeeded.

Meanwhile, his young wife Denise (Andrée Brabant) decides she will learn to play golf when she meets an accomplished player, Maurice Herbert (Jules Raucourt). A third player does not show up and when Guérande sees his wife enjoying herself, he assumes that the cause is Herbert and not a really low score for a first-timer. Depressed, he has the flirtatious princess’s sarcophagus moved into his study so that he can concentrate on her sad story instead of, you know, trying to understand his wife.

Later, Denise goes to a housewarming party for Herbert’s sister (a woman renting a bachelor pad, gasp!) and Guérande spies Herbert entering as well. Assuming it is a tryst and not a large party, Guérande decides he will follow the example of the older husbands he has read about in his history books: he will kill himself to free his young wife.

To that end, he injects a cigarette with poison and mixes it into a box of unpoisoned cigarettes so he will not know when the end will come. When Denise catches him in the act, he claims that he was merely using some of the ingredients from her perfume-mixing hobby to flavor his cigarettes. He also imperiously forbids Denise to smoke as he puffs away.

The whole thing is highly suspicious as Denise knows she just ran out of the ingredients he claims to have borrowed but every time she tries to investigate, her husband takes her behavior as further proof of her adultery and lights up again. Meanwhile, we have a cigarette-filching servant, guests who want a smoke and the ever-present possibility that Denise will want a smoke herself…

This is obviously a pretty dark comedy and I happen to like dark comedies very much. Dulac examines the dual problem of a marriage that includes both a gender gap and an age gap at a time when the differences between older people and the youth were at an unusual high. The First World War had shattered societies around the globe and young people were willing to examine new ways of doing things while older ones hoped to rebuild what was lost.

This gap is further emphasized by Guérande’s profession as an archaeologist. He spends all day every day buried in the past, forgetting that the modern world is a very different place. Denise is sweet and doting but she is also young and wants to have fun with people her own age.

Like M. Beudet, Guérande’s deepest issue is his utter lack of empathy. He is trying to apply ivory tower rationale to the real, modern world and it never occurs to him that the people in his historical records were living in another time and culture, not to mention the possibility of exaggeration or obfuscation. It certainly never occurs to him that his wife, as a lively young person, was interested in the sport of golf rather than her golfing partner. What other thing could a young lady possibly be excited about besides a lover? It’s not like she has hobbies or interests or a social life, right?

(Spoiler) While La Cigarette has an ostensibly happy ending with a triumphant Denise preventing his suicide smoking a cigarette with her husband, which on the surface looks like he has accepted her modern ways, it’s a hollow victory. She is still stuck with an emotionally stunted, selfish and manipulative man. He may be satisfied for now but he doesn’t seem to have actually learned his lesson beyond “My wife wasn’t cheating THIS TIME.” This is not the end of the couple’s problems. Dulac must have been aware of this as well as she corrected course in The Smiling Madame Beudet and ended on a sardonic note. (Obviously, I do not consider darker endings to be superior to happy ones, I just think that a happy ending doesn’t quite fit in this case.)

However, even acknowledging the May-December nature of the relationship puts Dulac a step ahead of some of the other domestic comedies being made at the time. I enjoyed DeMille’s marital comedies Don’t Change Your Husband and Why Change Your Wife but neither picture concedes that Thomas Meighan and Elliott Dexter being twice the age of Gloria Swanson might have had something to do with their lack of communication. (In fact, these age gaps are nearly identical to the real-life age difference of Signoret and Brabant in La Cigarette; Signoret was made up to look a decade older.)

Obviously, there is nothing wrong with an age difference in romance if everything is above board and ages of consent are respected but pretending that it doesn’t exist seems to be leaving a rather important storytelling element gathering dust on the table. In the DeMille pictures, everyone as treated as if they are in their thirties by the screenplay.

Germaine Dulac and screenwriter Jacques de Baroncelli do not make the same mistake and are careful to acknowledge all the worst case scenario problems of such a match. While the comedy is dark, the outcome is a little too sunshiny for my taste but getting there is all the fun.

La Cigarette is not quite as extreme or delicious as The Smiling Madame Beudet but it does hold plenty of delights for fans of domestic films and/or Germaine Dulac. It’s a smart, entertaining farce and a preview of future things to come in Dulac’s career.

Released on DVD and Bluray as part of the Early Women Filmmakers box set from Flicker Alley. It features a fine piano score by Judith Rosenburg.