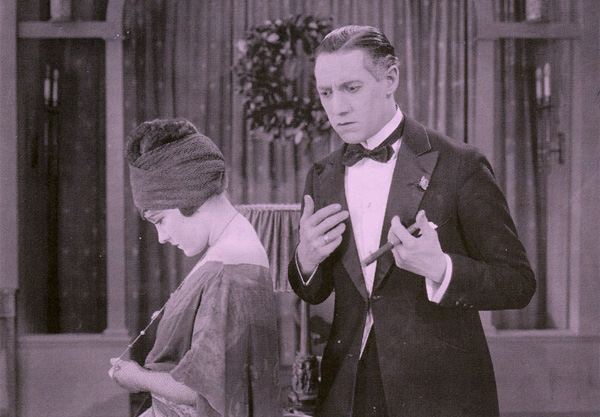 Gloria Swanson is a young wife whose husband is, for lack of a better word, a pigpen. Tired of his slovenly ways and uncaring manner, she leaves him for a better groomed, sweet-talking man. But all is not wine and rose and she soon learns that it may not have been a good idea to change her husband after all. DeMille’s dive into marital comedy is a glimpse of good things to come.

My wife said either the onions go or she would. I miss her sometimes.

Cecil B. DeMille may mean big (with a capital B) epics to his fans but in the late ‘teens and early twenties, he was linked with bedroom comedies. The then-controversial topic of marriage and divorce is covered in this film and in Why Change Your Wife?, its follow-up.

Elliott Dexter, one of DeMille’s favorite leading men, plays James Porter. He’s rich and he’s married to the chic Leila (Gloria Swanson, in full clotheshorse mode), what more could a man want? Well, he wants to smoke cigars and let the ash fall on the carpet, eat massive quantities of green onions and generally look like a slob. Frustrated and bored, Leila cannot persuade him to behave.

It’s no wonder, then, that Leila falls for the charms of Shuyler Van Sutphen (Lew Cody, who excelled at this sort of role), a fortune-hunting cad. Since this is a DeMille picture, his pitching of woo is accompanied by elaborately costumed fantasy sequences. In case you forgot who was at the helm.

So Leila divorces James to marry Shuyler but soon finds that she has jumped from the frying pan (with onions!) into the fire. Shuyler has slovenly habits of his own and he’s a spendthrift who wastes all his money on his mistresses. The current lady is Toodles, played by the perky and petite Julia Faye, who charmed the audiences onscreen and Mr. DeMille off.

James, meanwhile, has seen the error of his ways. He sees that Leila is not happy with her new marriage. Since turnabout is fair play, he plans to do his best to win Leila back from Schuyler. The cigars are now placed in a genteel holder. His clothes are pressed and he has shaved his walrusy mustache. And he has made the ultimate sacrifice: no more munching on raw onions.

Who will Leila end up with? Well, the title of the picture gives it away but getting there is all the fun.

Viewers who have only seen DeMille in epic mode are in for a treat. Don’t Change Your Husband is a sophisticated bit of fun. Plus, Gloria’s gowns are great fun to feast the eyes on. DeMille had a great talent for having his cake and eating it too. The scenario by Jeanie Macpherson involves adultery and divorce but since it is presented as proof that these actions are not a good idea, it neatly avoided being condemned as immoral.

Gloria Swanson, not yet twenty when the movie was shot, had already learned to project the aura of sophistication that she is so famous for. Perhaps she is a bit fastidious but it’s easy to sympathize with the irritation of living with James and understand why she fell for Schuyler’s line. After all, how could this glamorous creature live with such a slob?

If that weren’t enough, the motion picture camera seems to have a terrible crush on her. Her every expression photographs wonderfully. Elliot Dexter is likable though he does not have the same spark with Swanson that Thomas Meighan has. I think he was better in Adam’s Rib and A Romance of the Redwoods. On the other hand, I don’t think Meighan could look unattractive if he tried, even under a walrus mustache.

Anyone interested in learning why DeMille became such a box office powerhouse will enjoy Don’t Change Your Husband. It’s lean and fun, two things that many of his later pictures were not.

Don’t Change Your Husband is available on DVD from Image, bundled with DeMille’s 1915 crime drama, The Golden Chance. Sadly, this disc seems to be out of print.