The Mayor of Casterbridge (1921) A Silent Film Review

Thomas Hardy’s novel comes to the screen with the added prestige of both location shooting and the cooperation of the author himself. A rare look at the work of British director Sidney Morgan.

Selling the film rights to one’s novel remains a prickly subject. From Stephen King to Roald Dahl to Clive Cussler, writers in every genre have locked horns (sometimes spectacularly) with filmmakers trying to bring their work to the silver sheet. Few, though, have been as frank as Thomas Hardy. When he was first approached to sell the film rights to Tess of the d’Urbervilles in 1911, he wrote that he supposed a film adaptation “could do no harm to the book & might possibly advertise it among a new class.”

Needless to say, the money from such a scheme would be most welcome as well. The Tess deal fell through in this case but Hardy was able to sell rights to his novels throughout the silent era and films were successfully made, including the tantalizing—and lost—adaptation of Far from the Madding Crowd that starred Florence Turner.

The Progress Film Company of Shoreham-by-Sea did one better when they purchased the rights to The Mayor of Casterbridge. They not only opted to shoot on location in Dorset, they engaged Hardy as a consultant to, among other things, aid in bringing the correct Wessex flavor to the title cards. Hardy even visited the set and while he was amused to meet his creations “in the flesh” he dismissed the enterprise as “a strange business.”

I don’t know about you but I always get a slight sense of dissonance when I read about Victorian authors selling film rights and such. While I consciously know that movies were in Britain while Queen Victoria still reigned and that the author’s lifetimes overlapped the silent era, it still seems slightly odd to know that Sir Arthur Conan Doyle and Thomas Hardy dealt with Hollywood. It is strange and wonderful to read Hardy’s opinions of the moviemaking experience. (While Hardy lived until 1928, his last completed novel was published in 1895 so he seems more Victorian than his writing brethren, if that makes sense.)

The Mayor of Casterbridge was originally 5,500 feet (about six reels), reissued in 1926 as a two-reeler and is sometimes listed as a lost film or as only surviving in fragments. I’m not sure what your personal definition of fragment is but the copy I viewed for this piece is a one-reel condensation released on 9.5mm for home viewing. (Collector Christopher Bird kindly shared his copy and assisted with research for this review.) These aren’t random scenes that survived but rather selected scenes that create a relatively complete narrative. Given the fact that the film was already sliced down a mere five years after its release, it is unlikely that we will ever see the rest of it. (But, of course, holler if you find it in an attic.)

Naturally, one cannot cut 5/6 of a film and expect to keep everything so I am going to be judging the film more on the performances of its cast and the capturing of the Hardy flavor rather than on the adaptation, which cannot be fairly examined. And, unfortunately, 9.5mm releases quite often did not contain the original title cards of the theatrical release so we will not be able to judge the Wessex pedigree of the intertitles. Still, we are fortunate to have anything at all (remember Far from the Madding Crowd!) so let’s celebrate what survives.

The Mayor of Casterbridge is about a man named Henchard who, while drunk, sells his wife and young daughter to a sailor. Once sober, he regrets his actions but cannot undo them as the sailor has departed. Henchard becomes a model citizen, respected by all but his past and his own deep character flaws will soon reemerge to destroy him. (What do you want from me? It’s Thomas Hardy. I must confess that while I enjoyed Far From the Madding Crowd, I find his other works to be a trial.)

In the film, Henchard is played by Fred Groves and his wife, Susan, is played by Pauline Peters. The sections of the story that are left intact are the wife auction at the beginning (which takes up a quarter of the 9.5mm print’s brief running time) and then the sad end of Henchard’s hopes and ambitions, though it should be said that it is not quite as dreary as the Hardy original. 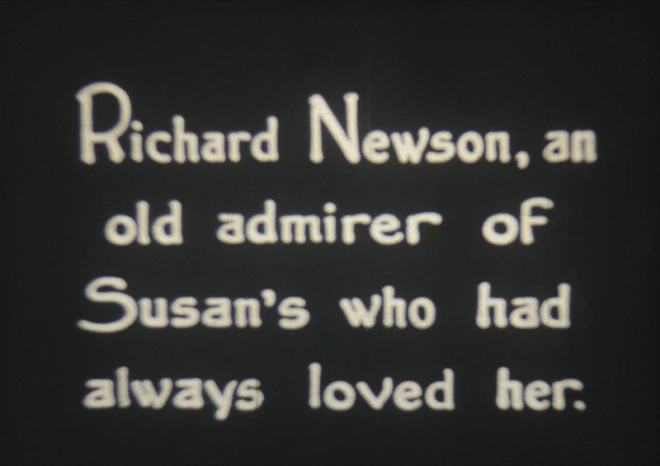 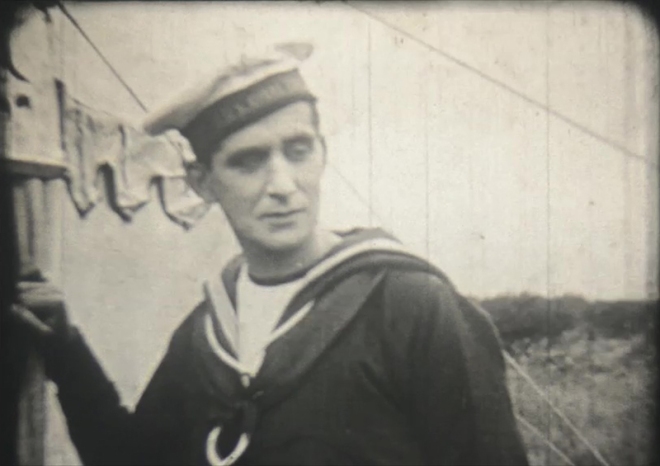 9.5mm collectors would engage in DIY alterations to their prints, new titles and the like. One of the major changes to the story is making Newson (Warwick Ward), the sailor who buys Susan, a former admirer of hers from the old days. This, of course, changes the tone of the story and simply makes it out to be a disgusted wife leaving her drunken man for an old flame, which in turn removes blame from Henchard. Since this change is effected entirely through title cards, I cannot tell whether this was part of the original film narrative, a change for the home viewing market (perhaps to make the story more palatable for children) or a decision made by a past owner of the print.

Most of the later events in Casterbridge are omitted, Susan and her daughter, Elizabeth-Jane (Mavis Clair), simply return and are reunited with Henchard. (Spoiler for a novel published in 1886) It is later revealed that Elizabeth-Jane is not Henchard’s daughter but Newson’s. The first Elizabeth-Jane died and the second was named for her. At least this is what is in the novel and in the synopsis found in the British Film Catalogue.

In this version of the film, Elizabeth-Jane accepts Newson as her father but the title cards claim Henchard is still her father. Not knowing this, she leaves with Newson and Henchard, whose past has been revealed, comes to a sad end.

British film of this period tends to have a bad reputation of being amateurish, sloppy and generally not worth viewing. I am always cautious about dismissing an entire nation’s cinematic efforts out of hand and, in any case, I have seen and enjoyed British silent films not directed by Alfred Hitchcock and like to give them a fair shake. (The Messianic Hitchcock narrative is slightly annoying. I love Hitch as much as anyone but the idea that no post-WWI British films were worth seeing until he showed up is just ridiculous.)

One of the interesting aspects of silent films adapted from Victorian/Gilded Age/Belle Epoque literature is seeing which ones made the decision to bring the story into modern times and which ones made it a period piece. While the divide between Victorian and post-WWI culture seems vast to us, it was by no means an easy or obvious choice and many filmmakers opted for modernization. (To put things in perspective, 35 years had passed between the publication of The Mayor of Casterbridge and the release of this film, so it would be like bringing a 1983 novel up to date now.)

While the 1921 film does not have any overt roaring twenties moments, the hats and frocks give it away as a modernization. It is not as obvious as the lost 1924 Metro-Goldwyn version of Tess of the d’Urbervilles, which featured nightclub sequences and bobbed hair. It seems that Hardy and his wife were amused (she saw it, he didn’t).

(You can read more about Hardy and the movies in Matthew Sweet’s Inventing the Victorians.)

Director Sidney Morgan and cinematographer Stanley Mumford do indeed make the most of their location shoot. One problem with Hollywood adaptations of rural English novels is that they make everything, even humble furmity tents, far too big and grand. Not to get too romantic about it but there is something healthy and honest about a cramped fairground, a humble dirt path and rural scenery that doesn’t have Mount Whitney or the Grand Canyon in the background.

In fact, I would describe the entire film as sensible and down to earth in a way that few American productions accomplished. (Tol’able David would be an exception.) The acting is both subtle and appropriate and while the depths of Henchard’s dark side are never explored, Fred Groves brings a nice intensity to the role. The supporting cast is similarly restrained and tasteful. Let’s face it, the temptation to go for tacky is always present in a Hardy adaptation so I must applaud these fine performers and their director.

I was so impressed by Morgan that I intend to add him to my list of directors to keep an eye on. I would very much like to see more of his work.

The Mayor of Casterbridge is too incomplete to fully judge it as a Hardy adaptation but for filmmaking basics, I am pretty confident in judging it as good. We don’t know about pacing or those tantalizing Wessex title cards, of course, but the scenery and performances are both quite satisfactory and the tang of authenticity enhances the film. Well worth seeing for Thomas Hardy devotees particularly.

The Mayor of Casterbridge survives as a 9.5mm condensation and the version I saw is in the collection of Christopher Bird.