Harold Lloyd and Bebe Daniels had been a screen team since 1915 but all things must end and this was their final release as a comedy duo. Lloyd has a bachelor party that proves to be so wild, his future mother-in-law calls off his marriage to Daniels. The heartbroken lad tries to find his lady love but ends up shipwrecked and rescued by a very unusual pirate crew.

The background story of this film is a little bittersweet. Harold Lloyd and Bebe Daniels had been a screen team since 1915 with Snub Pollard completing the trio as either the villain or the sidekick. Daniels was there when Lloyd made the switch from his Lonesome Luke character to his iconic Glass persona and their onscreen chemistry reflected a real world romance.

Captain Kidd’s Kids was the last movie Daniels made with Lloyd as his leading lady and it was released between Male and Female and Everywoman, two melodramas that marked Daniels’s debut at Famous Players-Lasky a.k.a. Paramount.

The story is fairly standard Lloyd fare with Boy losing Girl and getting her back after several oddball adventures. In this case, dealing with a ship full of lady pirates. The title of the film is a play on the ever-popular use of “kid” to mean a cute woman. (“I love my wife, but oh you kid!”)

Harold Lloyd plays a well-heeled bachelor who has celebrated his bachelor party in style. Perhaps a bit too much style. He just wants to sleep under the rug with a block of ice as a pillow but his valet, Snub Pollard, is trying to get him into the bath for his wedding day.

Bebe Daniels is the blushing bride but her mother (Helen Gilmore) has gotten wind of the wild goings on and calls off the wedding. She is going to take her daughter on a tour of the Canary Islands to forget. Naturally, Harold decides to follow.

A bit of historical context: While Captain Kidd’s Kids was in production, Prohibition was on the horizon. The Eighteenth Amendment had been ratified on January 16, 1919 and the Volstead Act (which enforced the ban on the “manufacture, sale, or transportation of intoxicating liquors” outlined in the amendment) was passed on October 28, 1919. Prohibition officially began on January 16, 1920. What all this means is that audiences of late 1919, when Captain Kidd’s Kids was initially released, would have read Bebe’s mother as a dour temperance crusader.

Anyway, Harold and Snub ship out for the Canary Islands (after some business with an absurdly deep bathtub) and Harold gets clunked on the head. He and Snub are overboard, floating in parts unknown but they are about to be rescued.

It seems there is a pirate ship that is completely manned, er, womaned by a female crew. The captain looks shockingly like Bebe’s mom and the first mate looks just like Bebe. Harold is hauled aboard and forced to work in the kitchen while Snub flirts his way into a cushy position as the captain’s favorite. Will Harold escape and win back his true love?

Captain Kidd’s Kids is a pretty mixed bag. On the plus side, the production and costume design are absolutely top notch and the entire picture is gorgeous. The picture had a budget of $17,982.60 for its two reels. For an apples to apples comparison, Lloyd’s two-reeler Haunted Spooks (1920) cost $21,612.41. For more context, Cecil B. DeMille’s 1919 release Don’t Change Your Husband (seven reels) had a budget of $73,922.14 and Male and Female (nine reels) had a budget of $168,629.28. In short, Captain Kidd’s Kids was par for the course and the money was all likely poured into the second reel.

In the minus column, Lloyd’s predicament never reaches quite the comedic heights one could hope for, the opening scenes of his after-party hangover drag on for far too long and the Chinese cook character (what James Wong Howe called an “adhesive tape actor”) is both stereotyped and unfunny. As was typical for the era and the trope (which I will discuss in a bit), the lady pirates don’t actually do much besides prance around in striped britches. The picture telegraphs the fact that the second reel is a dream sequence a bit too obviously. I would have preferred either some real peril from the pirates or having them act much, much, MUCH wackier to take advantage of the dreamland setting.

Daniels was ambitious and wanted to tackle modern parts in fine productions. The generous salary offered by Famous Players-Lasky certainly was an added incentive but it’s pretty clear that even without the money Daniels was ready to move on with her career. (Some biographers have put Daniels’s move to Paramount down to a gambit to coerce Lloyd into marrying her but there is little contemporary evidence that such was the case. Clearly, no actress can make an ambitious career move for her own benefit, it must all be due to her being a scheming, lovesick feeeemale.) DeMille was making the most stylish melodramas and boudoir comedies in the business and his offer would have had enormous professional appeal, especially considering recent film history.

Like Daniels, Gloria Swanson had started out in short comedies but had made the jump to dramas. DeMille had cast her as his female lead in Don’t Change Your Husband, which had been released in January of 1919, and she was fantastic. It is highly likely that Daniels had this sort of career path in mind and she was indeed cast in Male and Female, which starred Swanson and Thomas Meighan and, rather famously, a lion. Leaving the Girl roles far behind, Daniels vamped and camped for all she was worth in Why Change Your Wife? (also with Swanson and Meighan) and as, no joke, Satan Synne in The Affairs of Anatol with Swanson and Wallace Reid.

While it broke up a team, Daniels moving to Paramount proved to be a win-win all around. Lloyd ended up marrying Davis, Daniels was launched in her own series of comedies (many with gender-reverse plot elements) and everyone was more popular than ever.

Oh, and by the way, here’s an additional silent movie tidbit that is not generally known. The Lady Pirate/Girl Pirate trope was pretty common in the 1910s with child performers, juvenile actresses and adult leading ladies trying their hands at wearing striped trousers, hats and wielding blunderbusses and cutlasses. Prudence the Pirate, Captain Applejack, The Little Pirate and Such a Little Pirate were all released in the mid- to late-1910s and while the actual piracy that these actresses engaged in was fairly minimal, they were heavily marketed in their buccaneer regalia.

(Buccaneers of any gender were and are comedy gold. Hal Roach would return to piratical dreams, most charmingly in the 1934 Our Gang short Mama’s Little Pirate.)

Pathé leaned heavily on this approach in their marketing of the film over the years. Harold Lloyd and the cute lady pirates definitely make for a better ad than, say, Snub Pollard in the bathtub. 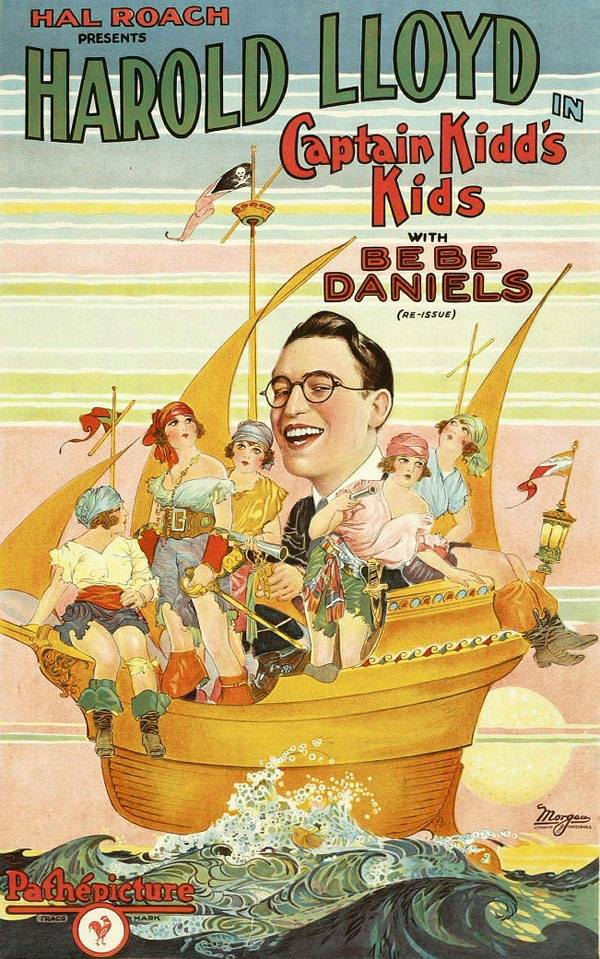 Captain Kidd’s Kids isn’t the best Lloyd short or the best showcase for Bebe Daniels but it does represent a turning point in their respective careers and it’s also fun to see the lady pirate trope dusted off and used once again. Not perfect but fun enough.

Captain Kidd’s Kids was released on DVD as part of the second volume of Kino’s Harold Lloyd Collection.